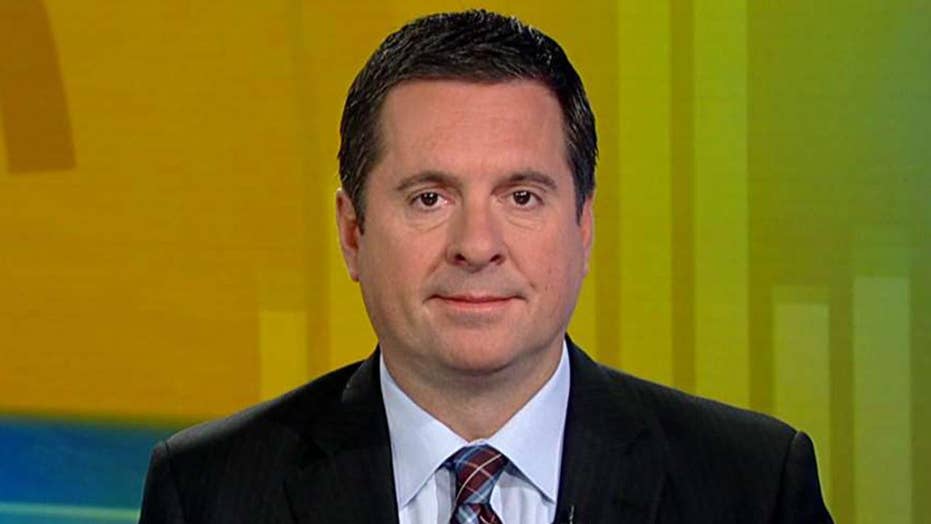 Rep. Nunes says he will pursue legal action on release of phone records

House Intelligence Committee Ranking Member Devin Nunes, R-Calif., is looking to fight back after Chairman Adam Schiff, D-Calif., subpoenaed and released his phone records in connection with the impeachment inquiry into President Trump.

Nunes on Sunday warned his fellow Republicans that the same thing could happen to them, although he pointed out various legal grounds he was exploring to prevent this from happening again.

"I'm in California, so for sure, state law, you cannot release somebody's phone records. So, for sure, that right has been violated. But, we also have to look at the constitutional aspects of this, and do all the members of Congress have a right to privacy, and can just one member, because he doesn’t like someone and he’s a political opponent of someone, can that member just subpoena records and then release just to embarrass or to create a distraction or to build whatever fantasy-land narrative that they continue to build?"

LINDSEY GRAHAM TORCHES SCHIFF OVER IMPEACHMENT TACTICS: HE 'IS DOING A LOT OF DAMAGE TO THE COUNTRY, AND HE NEEDS TO STOP'

Nunes pushed back against claims that the records were in connection to the Republican trying to get an ambassador fired, insisting that if he wanted to do this, he would be able to call Trump directly, "and I'm quite sure the president would probably listen to me."

One of the individuals linked to Nunes' office through the phone records was Lev Parnas, an associate of Rudy Giuliani who recently was indicted over alleged campaign-finance violations.

Nunes explained how he came to be linked to Parnas. "I got a call from a number that was Parnas' wife. I remember talking to someone and I did what I always do, which is if I don't know who they are, you put them to staff and you let staff work with that person," he said. 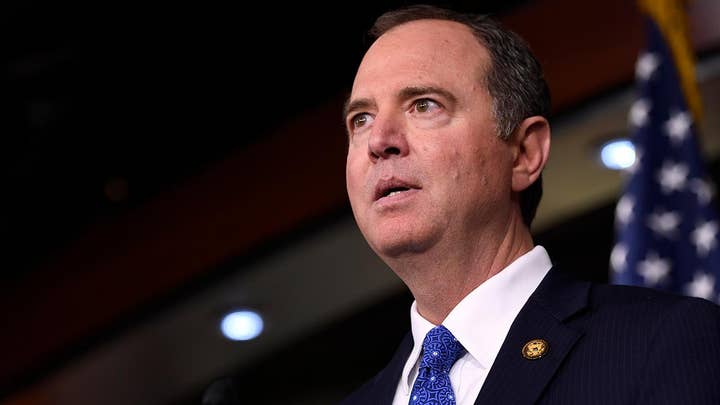 Nunes noted that his office went through all of their records, and "we have no information from Parnas. We have no documents, we have nothing. We have no emails, so there's nothing that we have in our control from Parnas."

The Republican insisted Democrats were targeting him because "they don't like that we exposed them for the Russia hoax that they were involved in, that's what this is about."

Later in the interview, Nunes addressed the Russia investigation again, in light of the pending release of the report from Justice Department Inspector General Michael E. Horowitz about possible Foreign Intelligence Surveillance Act [FISA] abuse by the FBI during the probe.

The report, which is expected to be released Monday, may confirm or refute assertions made by Republicans and Trump regarding the acquisition of a warrant to conduct surveillance of former Trump campaign adviser Carter Page.

Nunes was at the forefront of the GOP's attack on the FBI's methods, claiming they misrepresented evidence and left out exculpatory information about Page that affected the court's decision to grant the warrant and subsequent renewals.

"They key is whether or not what the House Intelligence Committee Republicans gave to the American people in February of '18, whether or not that was true or not true," Nunes said referring to his claims about possible FBI misconduct. "The additional evidence that Horowitz comes up with, that'll be great for us, because we're really interested if he found the exculpatory evidence that wasn't provided to the FISA court.

Nunes signaled he was not overly eager with anticipation of the upcoming report, noting that it was very limited in scope.

"He's only looking at FISA abuse. All of that evidence needs to be sent to Durham, the U.S. Attorney from Connecticut." U.S. Attorney John Durham has been tasked with a more comprehensive investigation of the origins of the Russia investigation. Unlike Horowitz, Durham has the authority to file criminal charges.

"That’s ultimately going to be the key," Nunes said, "is, what does Durham find in looking at this entire debacle, which is targeting a political campaign by the FBI and the Department of Justice."