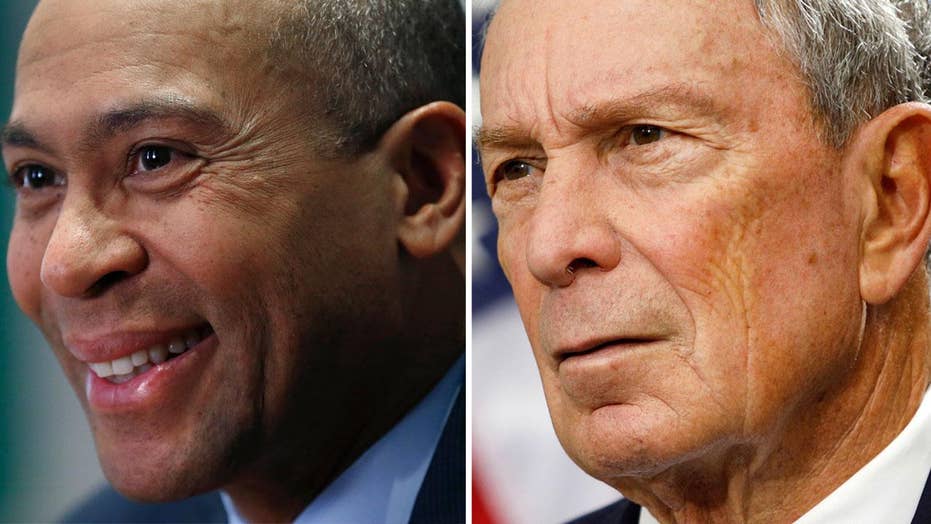 Jessica Tarlov says Michael Bloomberg and Deval Patrick mulling a 2020 run shows that elite Democrats are disconnected from the average party voter who is satisfied with the choices they already have.

Former Gov. Deval Patrick, D-Mass., is telling friends and allies he’s going to enter the race for the White House and is likely to announce his candidacy on Thursday, Fox News confirmed on Wednesday.

After declaring his candidacy, Patrick is expected to travel to neighboring New Hampshire to file for the state’s first-in-the-nation presidential primary. Friday is the last day for candidates to place their names on the primary ballot.

The news was first reported earlier Wednesday by The Associated Press, CNN and the New York Times.

Patrick mulled launching a presidential campaign last year, assembling a team of advisers and enjoyed the backing of some of former President Barack Obama’s top political aides. But late last year, Patrick announced he wouldn’t run, pointing to the “cruelty of our elections process.”

Patrick's campaign is likely to face high hurdles, including fundraising, a lack of national name recognition and entering the race extremely late in the election cycle. His move would come with less than three months to go until Iowa and New Hampshire kick off the presidential nominating calendar.

Patrick served as U.S. Assistant Attorney General for the Civil Rights Division from 1994-1997 under President Bill Clinton. He was elected governor of Massachusetts in 2006 and re-elected in 2010, the first black governor in the commonwealth's history.

After leaving office in 2015, Patrick took a job with Bain Capital, the Boston-based private investment firm that became a liability to Mitt Romney - Patrick’s predecessor as Massachusetts governor – during Romney’s 2012 presidential campaign. Patrick’s tenure at the firm would likely be in the spotlight if he enters the 2020 race.

The news about Patrick broke as Sen. Elizabeth Warren of Massachusetts – one of the co-front-runners in the 2020 Democratic race – was in New Hampshire to file for the primary.

Warren told Fox News that she hadn’t talked with Patrick in recent days and said “no” when asked if his entry into the race would complicate her campaign. When asked about Patrick's years working at Bain Capital, Warren answered: “I’m not here to criticize other Democrats. I’m here to talk about why I’m running for president.”

In recent days, former New York City mayor and billionaire business and media mogul Mike Bloomberg has placed his name on the presidential primary ballots in Alabama and Arkansas as he moves closer to launching a White House run.