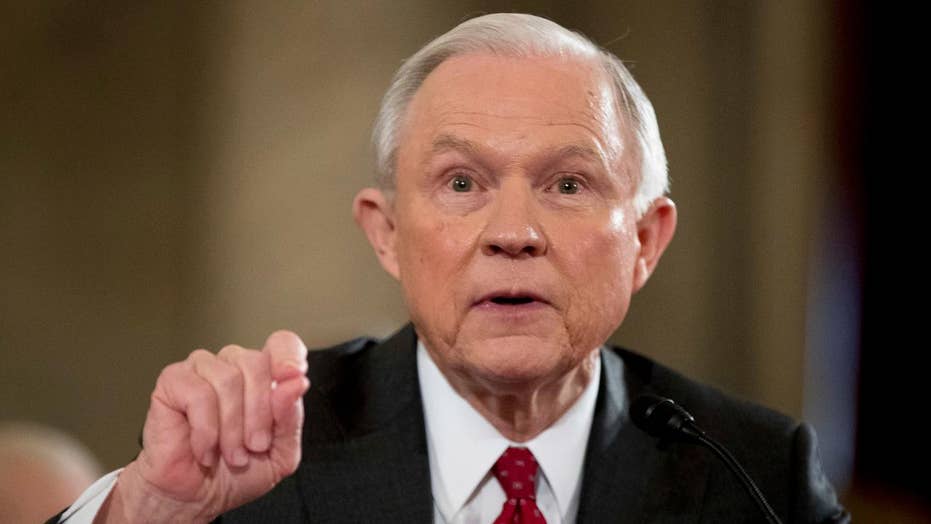 War of words on Capitol Hill over AG nominee Sessions

Senate Judiciary Committee Chairman Charles Grassley, R-Iowa, announced Tuesday afternoon that his panel would push off a vote on Sessions until Wednesday, after lengthy Democratic speeches sidelined plans to take up the nomination by the end of the day.

That was after Democrats boycotted a planned meeting of the Senate Finance Committee, forcing Republicans to indefinitely delay votes on the nominations of GOP Georgia Rep. Tom Price to be Health secretary and financier Steve Mnuchin to head the Treasury Department.

“The mere idea they’re not even showing up to hearings is truly outrageous,” he said.

The Senate was moving on other fronts.

Earlier in the day, the Senate Energy and Natural Resources Committee also advanced the nominations of Montana Rep. Ryan Zinke for Interior secretary and former Texas Gov. Rick Perry for Energy secretary. And a separate panel approved Betsy DeVos to lead the Education Department. The full Senate will still have to vote on those nominees.

But elsewhere on Capitol Hill, Democrats were locking up consideration of more contentious nominees.

In boycotting the Finance panel meeting, Democrats said they wanted more information on the nominees. They cited a report in The Wall Street Journal that Price received a discounted offer to buy stock in a biomedical company, which contradicted his testimony to Congress. They said another report showed documents revealing Mnuchin had not been truthful with the Senate about how his bank OneWest had handled home foreclosures.

Finance Committee Chairman Orrin Hatch, R-Utah, said he planned to reschedule the votes but did not say when. He said Democrats "ought to stop posturing and acting like idiots."

The conservative senator from Alabama was an early backer of Trump, and during his confirmation hearing he was dogged by allegations of racism – something he strongly denies.

But his nomination was further complicated by the fallout from Trump's controversial executive order suspending the U.S. refugee program and restricting immigration from seven Muslim-majority countries. On Monday night, Trump fired Acting Attorney General Sally Yates, a holdover from former President Barack Obama’s administration, when she defiantly refused to defend Trump’s controversial immigration order. Trump said Yates had betrayed the administration by not carrying out the order and replaced her with Dana Boente, a U.S. attorney for the Eastern District of Virginia.

Monday’s firing and escalating tension over Trump’s executive order made Tuesday’s meeting on Sessions particularly contentious. Democrats ultimately were able to use an obscure rule to effectively force a delay in the vote for at least another day.

The committee’s top Democrat, Sen. Dianne Feinstein, earlier took Sessions to task and tried to tie him to the controversial order and the Trump administration, as she announced her opposition.

“Not one order, idea or pronouncement is meant to bring this country together, they only serve to drive us further apart,” Feinstein said. “It is in this context we are being asked to consider this nomination.”

“That is what an attorney general must be willing to do,” she said before adding she has “no confidence” Sessions would be able to stand up to the president.

Sessions has denied he was involved in helping draft Trump’s immigration order.

“Neither I, nor any of my current staff, had such a role,” he said.

Two “Code Pink” protesters wearing pink shirts and in their 70s were dragged out of the hearing room after voicing their opposition to Sessions.

A separate Senate committee took up the nomination Tuesday of DeVos to head up Education. Democrats and Republicans on the Senate Health, Education, Pensions and Labor Committee battled over the charter school activist and wealthy Republican donor’s credentials, before the panel advanced her nomination to the Senate floor.

Washington Sen. Patty Murray, the top Democrat on the committee, said it was clear that DeVos is "the wrong choice."

Murray charged that DeVos has spent her family's wealth to push "extreme anti-student ideology" siphoning money away from public schools "toward taxpayer funded private school vouchers, with little accountability, for just a few."

Committee Chairman Lamar Alexander, R-Tenn., pushed back. He said he didn’t question the motives of his colleagues but thinks their concerns are “misplaced.”