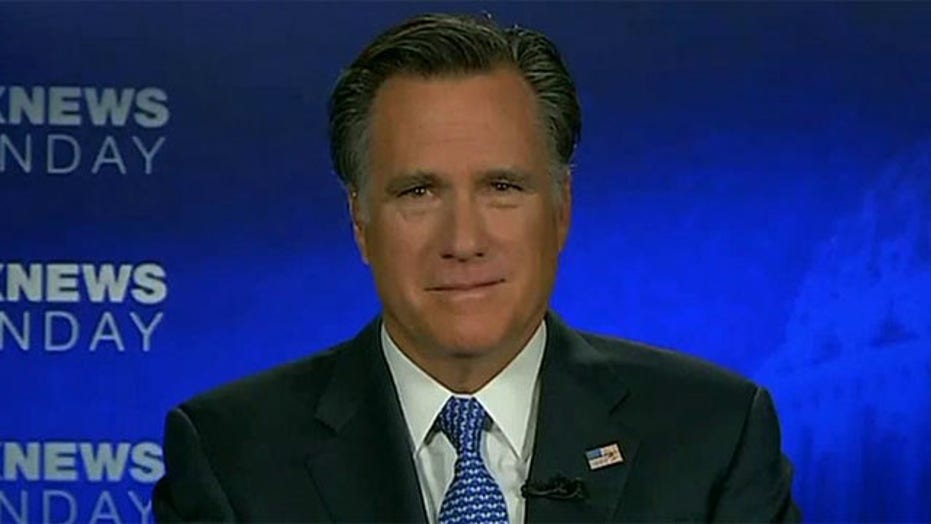 Congressional candidates are charging into their final 24 hours of campaigning before polls open Tuesday, with each side claiming the edge – though the last burst of polling would appear to show Republicans with an advantage in key races.

Meanwhile, 36 gubernatorial races are playing out across the nation, many of them competitive.

On Sunday, Democrats and Republicans got their last opportunities to make midterm arguments before big audiences.

In New Hampshire, Hillary Clinton headlined a rally for Sen. Jeanne Shaheen, a fellow Democrat who is in a tough re-election battle against Republican and former Massachusetts Sen. Scott Brown.

Clinton, who is weighing a 2016 presidential bid, charged that Republicans are running a campaign of fear.

"Fear is the last resort for those who have run out of ideas and hope," she said.

Earlier in the day, former GOP presidential nominee and Massachusetts Gov. Mitt Romney told voters that a vote for Senate Democrats would only prolong President Obama’s failing policies, including those on health care, the economy, education and stopping Islamic State militants.

“This is really the last chance for Americans to pass judgment on President Obama,” Romney told “Fox News Sunday.”

While the elections will determine winners in all 435 House districts and in 36 governors' seats, the national focus is largely on the Senate, where Republicans need to net six seats to control the majority in the Congress that convenes in January.

The GOP already controls the House, and a Senate takeover could dramatically change Obama's last two years in office.

According to a NBC/Marist poll released Sunday, Republicans are either leading in the key Senate races in Georgia, Kentucky and Louisiana or will likely win runoff elections.

Most polls have shown until now that the four races have essentially been deadlocked.

In Georgia, Republican nominee David Perdue is now ahead of Democrat Michelle Nunn, 48-to-44 percent, which suggests Perdue could get 50 percent of the vote on Tuesday and avoid a runoff.

Democrats saw an opportunity early in the election cycle to gain a seat in the traditionally GOP territory. But Perdue has, like other GOP Senate candidates, effectively portrayed his Democratic incumbent opponent as a "rubber stamp" for Obama.

"President Barack Obama said his policies are on the ballot, and in Georgia those policies go by the name of Michelle Nunn," Perdue said in a Sunday debate.

Nunn mockingly told Perdue he sounds like he's "running against the president."

"You're running against me, David," she added.

In Louisiana, three-term incumbent Democratic Sen. Mary Landrieu has 44 percent of the vote in a three-way race with GOP Rep. Bill Cassidy, at 36 percent, and Republican Rob Maness, at 15 percent.

However, in the likely scenario that Landrieu gets less than 50 percent of the vote and advances with the second finisher, Cassidy, he would likely get most of Maness’ votes and ultimately win.

Most all of the campaigns' costly voter-turnout operations were in full swing this weekend as each side worked to convince its supporters to get to the polls on Tuesday. Large percentages of younger voters and minorities -- groups that typically support Democrats -- are expected to sit out the elections altogether.

Early voting has been strong, however.

At least 16.4 million people have voted so far across 31 states, according to early voting data monitored by The Associated Press.

"The problem (Democrats) have is that their message isn't working and our ground game is whipping their ground game," Republican National Committee Chairman Reince Priebus told “ABC’s “This Week,” asserting early-voting advantages in Colorado, Arkansas and Iowa.

"The Democrats are going to have a terrible night," he continued. "And it's because Barack Obama's policies and Debbie Wasserman Schultz's policies and (Senate Majority Leader) Harry Reid's policies are on the ballot."

Wasserman Schultz, chairwoman of the Democratic National Committee, told ABC, “We've got candidates across the country who are focused on the issues important to the middle-class and working families. And the Republicans have doubled down on obstruction and extremism.”

While Clinton was in New Hampshire, Obama on Sunday was campaigning in two governor races, trying to save a Democrat in Connecticut and unseat a Republican in Pennsylvania.

"Stand up and show it. Speak up. Vote." Biden charged at an event targeting Hispanic voters at Florida International University.

Romney, who reiterated on Sunday that he would not make a third White House run, was campaigning in Alaska with GOP Senate candidate Dan Sullivan and GOP Gov. Sean Parnell, who is seeking another term.

New Jersey Gov. Chris Christie, who is expected to enter the 2016 Republican presidential primary, was to stop in South Carolina, Illinois, Maryland and Pennsylvania. And Kentucky GOP Sen. Rand Paul was campaigning across his home state.