Congressional Democrats and state governments are pushing a range of ways to assist illegal immigrants in their response to the coronavirus crisis, calling for the release of those in detention and lobbying to make them eligible for over a thousand dollars each in stimulus payments.

President Trump, for his part, has responded to the crisis by cracking down on both illegal and legal immigration — slapping travel bans on China, Iran and the European Union and limiting entry on land borders to the north and south, while border officials are immediately returning illegal immigrants and asylum seekers to their home countries.

Democrats, however, are taking the opposite approach. Sen. Cory Booker, D-N.J., and Rep. Pramila Jayapal, D-Wash., have introduced a bill that would release immigrants in detention into the country, and halt any immigration enforcement against anyone not deemed a “significant” threat to public safety.

“We have an obligation to do everything we can to prevent the spread of this deadly disease, and that means moving people out of detention centers when they do not pose a public safety risk,” Booker said in a statement. “This is really a matter of life and death: it’s time that we act quickly and decisively to save as many lives as possible, and that means ending the unnecessary detention of immigrants during this public health crisis.”

Meanwhile, on Capitol Hill, Democrats are demanding that the next round of stimulus checks include illegal immigrants by modifying a requirement that recipients have a Social Security number to receive one.

A $3 trillion bill passed by the Democratic-controlled House last week would allow the $1,200 stimulus checks to go to those who also pay income taxes via an Individual Taxpayer Identification Number (ITIN) — which is used by people who are ineligible for a Social Security number, including illegal immigrants.

As partial justification, Democrats have pointed to so-called mixed families, in which there are American citizens or legal permanent residents, as well as illegal immigrants, in one family. They file using an ITIN and so far have not been eligible for aid.

“The Supreme Court ruled that children, undocumented children should have a right to education in our country. Why not then should citizens’ children, children in taxpayers’ families, not have the opportunity to the checks that they need?” House Speaker Nancy Pelosi, D-Calif., said on a press call this month.

But it’s an idea that has drawn strong criticism, even mockery, from Republicans who believe that aid should be reserved only to citizens and those here legally.

“Can you believe it? We forgot to have the Treasury Department send money to people here illegally. My goodness. What an oversight,” Senate Majority Leader Mitch McConnell, R-Ky., said on the Senate floor last week.

The bill also included protections for “essential critical infrastructure workers” that would allow some illegal immigrants employed as such to be placed into “a period of deferred action” and be authorized to work if they meet certain conditions.

The move was flagged by Deputy Homeland Security Secretary Ken Cuccinelli as a push by Democrats to grant "amnesty" to illegal immigrants and protection to those who employ them.

“Is it really a good idea to not only grant an amnesty to illegal aliens but to absolve employers who have been breaking the law in the last few months?” he tweeted. “I don't think so!”

Meanwhile, some state governments have been seeking to make sure illegal immigrants receive money and argue they should have been included in the last round of stimulus.

The Seattle City Council is calling on Washington state to create a $100 million “relief fund” for illegal immigrants who did not qualify for the federal stimulus checks issued last month. 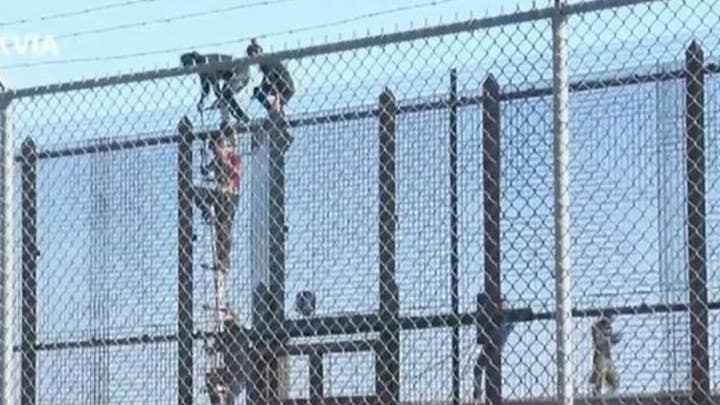 Meanwhile in California, the state has opened up about $75 million for a fund to help roughly 150,000 illegal immigrants in the state. It gives them access to a coronavirus relief program that will pay $500 per person and up to $1,000 per household.

The developments come as Democrats continue to shift left on immigration issues to the backdrop of the presidential race, drawing contrasts with Republicans who, along with the Trump administration, have advocated even tougher policies.

Democrats have opposed a host of Trump’s border security measures, including the wall at the southern border and the “Remain-in-Mexico” policy, while a number of top Democrats and presidential contenders have backed calls to abolish Immigration and Customs Enforcement (ICE) and to give health care and other social services to illegal immigrants.

Presumptive Democratic nominee Joe Biden, meanwhile, has been on record calling for health care for illegal immigrants, as well as a 100-day moratorium on deportations if he wins the election in November.