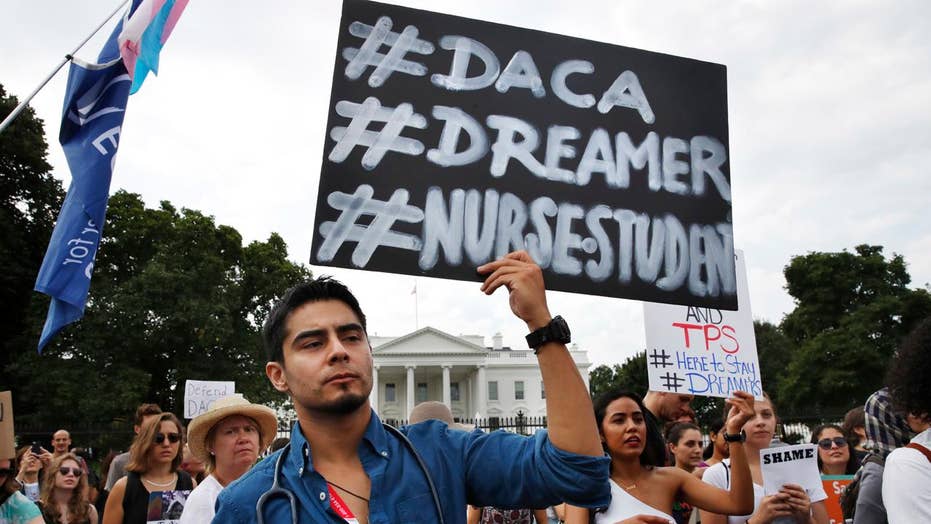 A showdown could loom in December.

Not over tax reform, but over funding the government.

The federal government is funded through December 8. Republicans control the House and Senate. But historically, the GOP has failed on its own to provide the necessary votes to avert a government shutdown.

The party required a bailout from Democrats as recently as Sept. 2015 to help make up the vote deficit and pass those spending bills. Republicans sometimes balk for a variety of reasons. They don’t like stopgap appropriations packages. They’re disgusted by the process. They demand more for defense. What about entitlement spending? Where’s the plan to reduce the national debt?

As an aside, the answer to the final question wasn’t really addressed in the recent budget framework approved by the House and Senate to muscle through tax reform. And deficits are forecast to balloon by at least $1.5 trillion in the Republican tax bill.

But back to government funding …

When Republicans find themselves short in these government funding crises, they turn to Democrats. But Democratic votes could prove even more valuable in this December’s scenario.

It all has to do with DACA and DREAMers.

DACA is the abbreviation for an Obama administration-era program “Deferred Action for Childhood Arrivals.” Democrats and some Republicans often refer to undocumented persons who arrived in the U.S. as minors as DREAMers. That’s derived from the bipartisan DREAM Act, short for “The Development, Relief, Education for Minors” bill.

A coalition of liberal Democrats is now flexing its muscles on the upcoming government spending bill. Many Democrats insist that congressional leaders attach the DREAM Act to the spending package, or else.

“If there’s no clean DREAM Act in the budget, we’re not voting for it,” threatened Rep. Adriano Espaillat, D-N.Y.

Rep. Pramila Jayapal recently challenged House Republicans to pass the spending bill on their own.

“But if … you need our votes, include a clean DREAM Act,” the Washington Democrat said.

“Republicans are the majority until it comes to governance,” argued Rep. Luis Gutierrez, D-Ill. “Oh. You don’t have 218 votes? We’re happy to help keep the government open.”

“We believe we’ll get it in the omnibus (spending) bill because both Republicans and Democrats want it,” Schumer said. “If DACA is in the bill, (President Trump) won’t veto it.”

Is there a risk of a government shutdown if Democrats insist on shoving DACA into the spending measure despite possible presidential objections?

“It won’t come to that,” Schumer replied.

Tell that to those on the right -- and maybe even those in the White House.

“DACA will not be in the government funding bill,” said Rep. Mark Meadows, R-N.C., leader of the conservative House Freedom Caucus.

Including DACA in the spending plan could be the only way for Republicans to obtain necessary Democratic votes to avoid a government shutdown.

And Schumer appears correct:  There are Republicans who want to advance a DACA solution. A group of moderate House Republicans held a press conference last week calling for just that. But immigration politics are dicey for the right.

Latching the DACA plan to the spending bill poses tremendous risk for Republicans. Ryan and McConnell are sure to draw the ire of the hard right and lawmakers who fret about border security, a border wall or “amnesty.”

“He won’t be speaker for long if he does that,” a conservative House Republican predicted about Ryan if he allows a DACA provision in the spending legislation.

Ryan’s wants to cleave DACA from the spending bill. When asked if he would consider a DACA attachment in the spending legislation, he replied, “I don’t.”

The speaker also said the DACA fix should be considered “on its own merits.” And he questioned whether Congress had to address the issue by the end of the year.

“We have until, I believe, March,” Ryan said. “So I don’t think we need to have artificial deadlines within the one we already have.”

It could be time to horse trade. Democrats hold many of the cards in this poker game. But the administration has cards to play, too.

Trump may not like the idea of an immediate DACA fix. But how about a DACA deal in exchange for extra money for a border wall.

“As the president explained in his letter to the House and Senate leadership, the administration’s reform priorities ‘must be included as a part of any legislation addressing the status of DACA recipients,’ ” said a White House official to Fox.

“These reforms have been identified by our nation’s law enforcement professionals as a vital safeguard for the American people to both prevent new illegal immigration (border wall, legal loopholes) and to end chain migration.”

House Minority Whip Steny Hoyer, D-Md., has said since summer he wants a DACA fix soon. But Hoyer demurred when asked whether Democrats would demand a DACA link to the spending bill in exchange for Democratic votes.

The latest wrinkle is that Trump and congressional leaders may try to load up the spending package with hurricane relief for Texas, Florida, Puerto Rico and the U.S. Virgin Islands. Congress has already forked over $52 billion in disaster relief. The administration submitted its third disaster spending request to Congress late last week: $44 billion. But the plan includes offsets to counteract the new spending.

Just a few weeks ago, some lawmakers thought the key to courting Democratic votes for the government spending legislation was to add on disaster relief.

“You mean to tell me they (Democrats) won’t vote for the spending? All of the disaster aid and Puerto Rico?” Meadows asked rhetorically.

But members of both parties excoriated the hurricane plan.

The OMB request "is very disappointing. Not only is it completely inadequate, it shows OMB’s complete lack of understanding of the fundamental needs of Texans,” groused Texas GOP Rep. John Culberson, a senior member of the Appropriations Committee and potentially a vulnerable GOPer next election cycle. “Our community is still trying to recover, and this request is a nightmare for those who are trying to rebuild their lives.”

Mississippi Rep. Bennie Thompson, the top Democrat on the House Homeland Security Committee, said, “The administration’s third disaster supplemental request is an insult. This request’s stinginess is both contemptable and ineffectual.”

So all eyes are trained on the big White House meeting Tuesday afternoon with the president and top Congressional leaders.

Congressional Republicans are racing to complete tax reform. But one thing is for certain: The GOP faces disaster if they fail to fund the government.

Democrats again hold many of the cards. And Trump and congressional Republicans may have to cede a lot of ground on DACA and disaster relief if they don’t want a government shutdown tussle to sideline their tax reform efforts in December.