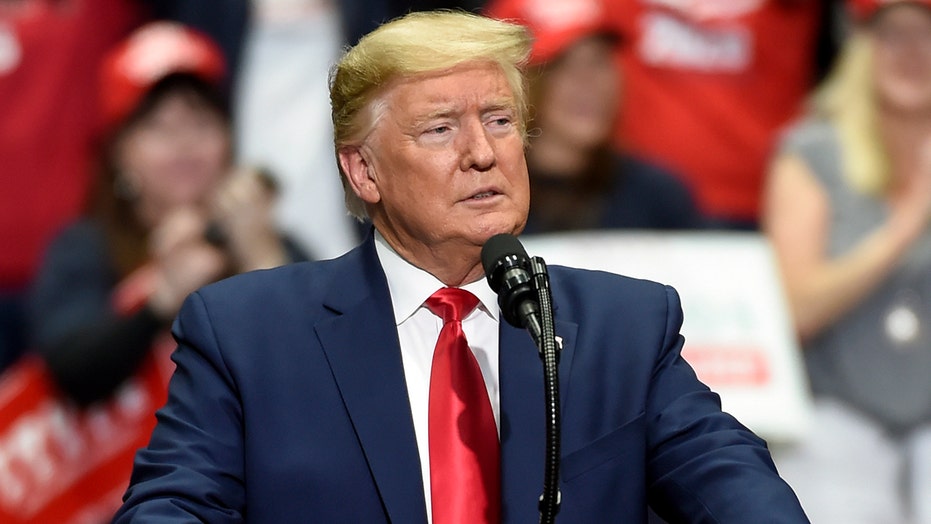 President Trump to restart campaign events this month; reaction on 'The Five.'

Top Democrats who cheered on "Black Lives Matter" crowds across the U.S. are now criticizing President Trump for planning to restart his campaign rallies, saying the events -- which are scheduled to kick off in Tulsa, Okla. -- could help spread the coronavirus.

The apparent hypocrisy comes just weeks after big-city Democrats who once insisted on strict coronavirus lockdown measures had relented in the wake of George Floyd's in-custody death, and encouraged anti-police demonstrations.

On Monday, U.S. Rep. Val Demings, D-Fla., told her Twitter followers she had joined a "Healing and Hope" rally "to speak with our community as America grieves."

INSIDE A MASSIVE EFFORT TO DEPLATFORM CONSERVATIVES OVER BLACK LIVES MATTER

By Thursday, Demings -- considered a possible running mate for Joe Biden -- had suddenly changed her tune on mass gatherings.

"The president’s plan to hold mass rallies in Florida and elsewhere as we experience a resurgence in COVID cases is irresponsible and selfish," Demings remarked, without any reference to her previous comments.

Demings was not alone. A week ago, U.S. Sen. Bernie Sanders of Vermont, an independent who sought the Democratic presidential nomination before suspending his campaign in April, tweeted: "Congratulations to all who are out on the streets today peacefully protesting. Together, we will end police brutality. Together, we will defeat Trump. Together, we will fight for a government based on justice and compassion, not greed and lies."

But by Thursday, Sanders, too, took a different approach to public safety.

"Trump wants 15,000 delegates cheering him at his GOP convention in Florida," the former presidential candidate said, referring to the president's new convention site. "No social distancing. His rejection of medical advice endangers not only those there but those they come in contact with. Trump's a threat to the health and well-being of the country. He must be defeated."

The double standard from the anti-Trump crowd didn't go unnoticed.

As recently as late May, the coronavirus lockdown was seemingly down and out, as many Democrats in charge of big cities -- including several who once insisted on strict quarantine measures -- lined up to champion nationwide mass demonstrations.

New York Gov. Andrew Cuomo had previously lashed out at protesters calling to reopen the state, saying at a news conference, "you have no right to jeopardize my health ... and my children's health and your children's health." Cuomo's directives have been enforced throughout the state: A New York City tanning salon owner told Fox News he was fined $1,000 for reopening, calling the situation "insane" and saying he already was "broke."

Days later, though, Cuomo said he "stands" with those defying stay-at-home orders: "Nobody is sanctioning the arson, and the thuggery and the burglaries, but the protesters and the anger and the fear and the frustration? Yes. Yes, and the demand is for justice."

In April, New York City Mayor Bill de Blasio told the Jewish community that "the time for warnings has passed" after he said a funeral gathering had violated social distancing guidelines. In May, the mayor asserted, "We have always honored non-violent protests."

And, Los Angeles Mayor Eric Garcetti threatened in March to cut power and water for businesses that reopened, saying he wanted to punish "irresponsible and selfish" behavior. In recent days, he has encouraged mass gatherings, even as he condemned violence.

"I will always protect Angelenos' right to make their voices heard — and we can lead the movement against racism without fear of violence or vandalism," he said.

The mayor of Washington D.C., Muriel Bowser, vowed $5,000 fines or 90 days in jail for anyone violating stay-at-home orders. After Floyd's death, though, Bowser defended the protests.

"We are grieving hundreds of years of institutional racism," she said. "People are tired, sad, angry and desperate for change."

Consultant Drew Holden pointed to other examples of protest hypocrisy in a lengthy Twitter thread, noting the media has covered the seizure of several blocks in Seattle very differently than it covered a 2014 standoff with right-wingers in Oregon.

For Democrats, a newly resurfaced November 2015 memo from a senior Democratic Congressional Campaign Committee (DCCC) official has driven concerns that yet more hypocrisy may be afoot. The memo derides the Black Lives Matter movement as "radical," and offers Democratic House candidates suggestions for how to handle activists who attempt to approach their campaigns.

The secretive document, first leaked in 2016 by the hacker "Guccifer 2.0," was characterized as insensitive and condescending at the time. Now, as Democrats are confronted with a newly resurgent Black Lives Matter (BLM) movement that has led politicians to kneel in kente cloths and changed free speech norms across the country, the memo threatens to undermine their stated commitment to reform following the in-custody death of George Floyd.

"This document should not be emailed or handed to anyone outside of the building," the memo from Troy Perry, a top DCCC official, begins. "Please only give campaign staff these best practices in meetings or over the phone."

Perry, who is black, goes on to characterize Black Lives Matter as a "radical movement to end 'anti-black racism.'"

He notes that Black Lives Matter activists don't want their movement "co-opted by the Democratic Party."

Black Lives Matter advocates for a "collective ownership" economic model, reparations and the "immediate release" of everyone convicted of a drug offense, in addition to defunding police forces and other left-wing agenda items.

If approached by Black Lives Matter activists, Perry advises in the memo that House candidates offer to meet with them -- but that they shouldn't "offer support for concrete policy positions."

Under no circumstances, Perry says, should Democrats "say 'all lives matter' nor mention 'black-on-black crime.'"

"These are all viewed as red herring attacks," the document reads. "This response will garner additional media scrutiny and only anger BLM activists. This is the worst response."