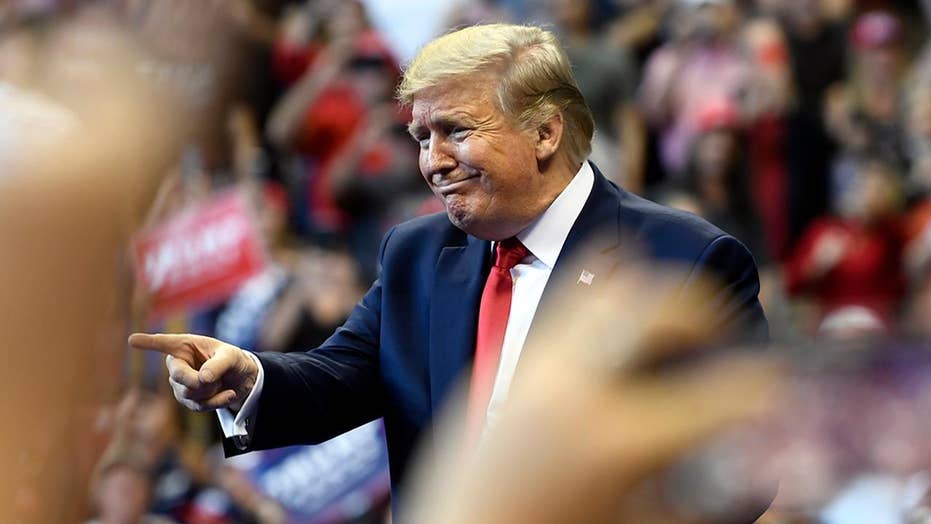 The Trump campaign is exploring ways to get back on the road in order to re-enerigize the base; reaction and analysis on 'The Five.'

President Trump will resume hosting campaign rallies sometime in the next two weeks, returning one of the president's most potent weapons to his arsenal as the 2020 campaign season enters a pivotal stretch, Fox News is told.

Trump had suspended the rallies, which energize his base and allow his team to collect a treasure trove of voter data, in early March amid the coronavirus pandemic.

“Americans are ready to get back to action and so is President Trump," Trump campaign manager Brad Parscale told Fox News. "The Great American Comeback is real and the rallies will be tremendous. You’ll again see the kind of crowds and enthusiasm that Sleepy Joe Biden can only dream of.”

As late as March 9, Anthony Fauci, the director of the National Institute of Allergy and Infectious Diseases, remarked that going to campaign rallies may not be a bad idea.

"You know, I can’t comment on campaign rallies," Fauci told reporters. "It really depends. We are having as we all said — this is something in motion. This is an evolving thing. ... If you want to talk about large gatherings in a place you have community spread, I think that’s a judgment call, and if someone decides they want to cancel it, I wouldn’t publicly criticize them."

Days later, the president pulled the plug. “I’m not going to do it if I think it’s going to be negative at all,” Trump said. “I don’t want people dying.”

Monday's announcement that the rallies would resume comes as some polls show the president's support significantly trailing rival Joe Biden.

“CNN Polls are as Fake as their Reporting,” Trump tweeted early Monday. “Same numbers, and worse, against Crooked Hillary. The Dems would destroy America!”

The change-up also follows statements by many Democrats in charge of big cities -- including several who once insisted on strict quarantine measures -- championing the nationwide mass demonstrations over the in-custody death of George Floyd, sans social distancing. Epidemiologists, too, have abruptly changed their tune, even though they once said lockdown measures were so important that they justified widespread unemployment and business closures.

"We spent the last couple of months being hectored by public health experts and earnestly righteous media personalities who insisted that easing lockdown policies was immoral, that refusing to social distance or wear masks was nigh upon murderous," Jonah Goldberg wrote for the G-File. "They even suggested that protests were somehow profane. But now that the George Floyd protests are serving as some kind of Great Awokening, many of the same are saying 'never mind' about all of that. Protests aren’t profane, they’re glorious and essential—if they agree with what you’re protesting about."

More and more states are now reopening pursuant to federal guidelines and local leaders' assessments, and the nonenforcement of quarantine measures during the Floyd protests has left governors with little room to argue for extending the lockdowns.

Nevertheless, the left-wing taxpayer-funded radio station NPR ran a story late Monday suggesting that the rallies will be dangerous. NPR did not indicate that the Floyd protests would be dangerous in posts covering those demonstrations.

Prior to suspending rallies in March, the Trump campaign had previously been eyeing, but had not yet announced, a rally in Tampa, Florida, on March 25.

The massive events are often an opportunity for Trump to hone attack lines against his opponents -- but also present chances for them to hit back. At a campaign rally in late February, for example,  Trump calls Democrats' criticisms of his coronavirus response "their new hoax."

Biden and other Democrats then falsely accused Trump of calling the virus itself a hoax. Several fact-checkers, including The Washington Post, make clear that Trump was referring to the Democrats' response to the virus.