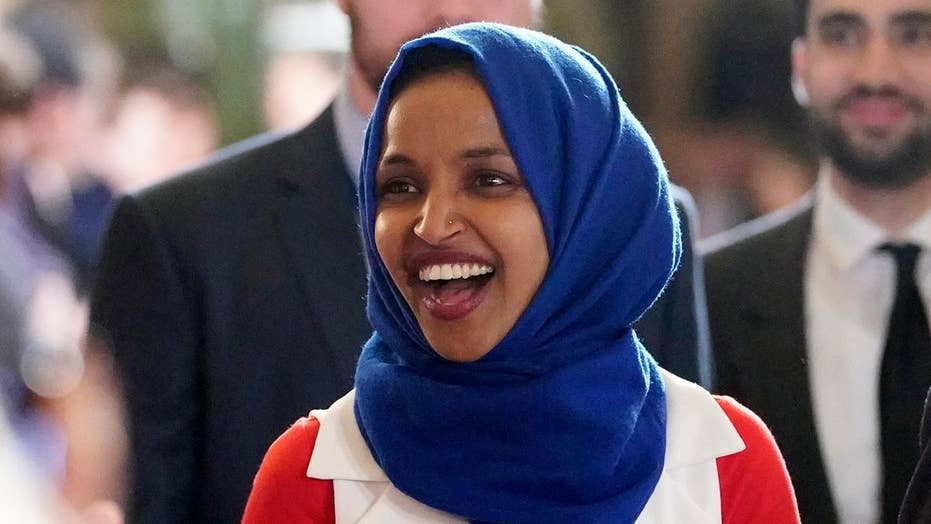 'Anti-Semitism is real and I am grateful for Jewish allies and colleagues who are educating me on the painful history of anti-Semitic tropes,' tweeted Rep. Omar; chief congressional correspondent Mike Emanuel reports from Capitol Hill.

Rep. Ilhan Omar, D-Minn., apologized Monday for comments in which she implied that a prominent pro-Israel lobby compensated lawmakers for their support of the Jewish state, but insisted on what she called "the problematic role of lobbyists in our politics."

"Anti-Semitism is real and I am grateful for Jewish allies and colleagues who are educating me on the painful history of anti-Semitic tropes," Omar wrote in a statement posted to Twitter. "My intention is never to offend my constituents or Jewish Americans as a whole. We have to always be willing to step back and think through criticism, just as I expect people to hear me when others attack me for my identity. This is why I unequivocally apologize."

"At the same time," she added, "I reaffirm the problematic role of lobbyists in our politics, whether it be AIPAC [the American Israel Public Affairs Committee], the [National Rifle Association] or the fossil fuel industry. It's gone on too long and we must be willing to address it."

Omar drew condemnation from members of both parties after she tweeted Sunday evening that AIPAC has been paying members of Congress to support Israel. On Monday, House Speaker Nancy Pelosi, D-Calif., called on Omar to apologize, saying that "her use of anti-Semitic tropes and prejudicial accusations about Israel's supporters is deeply offensive."

MCCARTHY ASKS DEMS TO DENOUCE ALLEGED ANTI-SEMITIC REMARKS: 'THIS WILL NOT BE THE END OF THIS'

"Her words are deeply hurtful and offensive, particularly as they build on a previous comment she made [in 2012] about Jews 'hypnotizing' the world in support of Israel -- another old trope born of hate-filled texts like the Protocols of the Elders of Zion," Nadler said. " ... In this fragile moment in our nation’s history, we must all redouble our efforts to engage in policy debates in ways that respect the dignity and humanity of all people."

Omar apologized last month for posting the tweet referenced by Nadler, which read: "Israel has hypnotized the world, may Allah awaken the people and help them see the evil doings of Israel. #Gaza #Palestine#Israel." As of Monday afternoon, the messages that caused the most recent furor were still posted on Omar's Twitter page.

Last month, Omar argued in a Yahoo! News interview that Israel could not be considered a democracy and compared it to the Islamic theocracy in Iran.

AIPAC responded Sunday night by tweeting: "We are proud that we are engaged in the democratic process to strengthen the US-Israel relationship. Our bipartisan efforts are reflective of American values and interests. We will not be deterred in any way by ill-informed and illegitimate attacks on this important work."