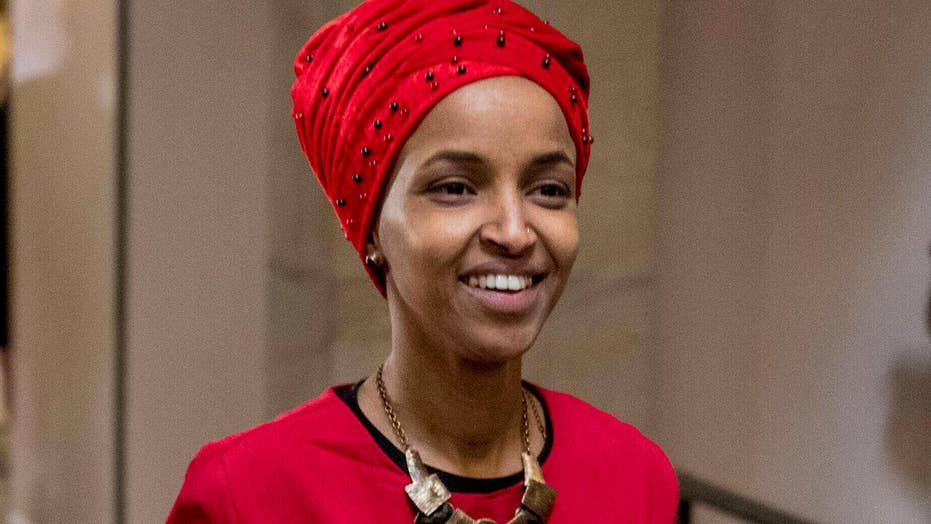 In an unprecedented rebuke under the new Congress, House Democratic leaders on Monday roundly condemned Rep. Ilhan Omar, D-Minn., for statements about supporters of Israel that were widely viewed as anti-Semitic and called on her to apologize.

The statement issued by House Speaker Nancy Pelosi and the rest of the Democratic leadership team followed the latest in a string of controversial comments from the freshman lawmaker -- as well as pressure from Republican leaders to speak out.

MCCARTHY ASKS DEMS TO DENOUNCE ALLEGED ANTI-SEMITIC REMARKS: 'THIS WILL NOT BE THE END OF THIS'

“Anti-Semitism must be called out, confronted and condemned whenever it is encountered, without exception," the statement said. "We are and will always be strong supporters of Israel in Congress because we understand that our support is based on shared values and strategic interests. Legitimate criticism of Israel’s policies is protected by the values of free speech and democratic debate that the United States and Israel share. But Congresswoman Omar’s use of anti-Semitic tropes and prejudicial accusations about Israel’s supporters is deeply offensive.

"We condemn these remarks and we call upon Congresswoman Omar to immediately apologize for these hurtful comments."

Omar, in response, "unequivocally" apologized, while reaffirming the "problematic role" of lobbyists.

The statements came after several other senior Democrats had weighed in, including the chairman of the House Foreign Affairs Committee on which Omar sits. “Anti-Semitism in any form is unacceptable, and it’s shocking to hear a Member of Congress invoke the anti-Semitic trope of ‘Jewish money,’” Rep. Eliot Engel, D-N.Y., said earlier Monday.

This followed Rep. Jerry Nadler, D-N.Y., a prominent Jewish lawmaker and chairman of the House Judiciary Committee, saying: “It is deeply disappointing and disturbing to hear Representative Ilhan Omar’s choice of words in her exchange with a journalist yesterday, wherein she appears to traffic in old anti-Semitic tropes about Jews and money. Her words are deeply hurtful and offensive, particularly as they build on a previous comment she made about Jews ‘hypnotizing’ the world in support of Israel.”

Omar, who became the first Somali-American woman elected to Congress in November, touched off the controversy when she responded to a tweet by journalist Glenn Greenwald criticizing House Minority Leader Kevin McCarthy, R-Calif., for urging action against Omar and Rep. Rashida Tlaib, D-Mich., for allegedly anti-Semitic remarks made earlier.

Greenwald accused McCarthy of targeting Omar and Tlaib for their public criticisms of Israel, to which Omar responded, "It's all about the Benjamins, baby," quoting a 1997 song by Puff Daddy. She then doubled down when challenged by Batya Ungar-Sargon, the opinion editor of The Forward newspaper.

In response, Omar tweeted "AIPAC!" referring to the American Israel Public Affairs Committee, which has been accused of agitating for a conflict with Iran.

Omar’s tweets were swiftly condemned by fellow Democrats -- including former first daughter Chelsea Clinton, who said she planned to reach out to the freshman lawmaker, and some Jewish members of Congress.

“For nearly two weeks, Rep. [Omar] has avoided meeting with me to discuss why anti-Semitic tropes like these are hurtful to so many Americans,” Rep. Josh Gottheimer, D-N.J., tweeted. “There is absolutely no place for this rhetoric in Congress -- or anywhere.”

The Anti-Defamation League, meanwhile, called on House leadership to take action in response to Omar's comments.

“Unfortunately, making insensitive statements toward the Jewish community is not new for Rep. Omar. These tweets are part of a disturbing pattern of behavior that must end,” ADL CEO Jonathan A. Greenblatt said in a statement. “... Strong bipartisan support for Israel is not a result of money or lobbying. Israel is the only democracy in the Middle East and a strong American ally in a strategically important region.”

From the Republican side of the aisle, RNC Chairwoman Ronna McDaniel on Monday called for Pelosi to remove Omar from the House Foreign Affairs Committee.

Omar initially did not back down. She told Chelsea Clinton over Twitter that she would be happy to talk to her and that “[w]e must call out smears from the GOP and their allies.”

“I believe we can do that without criticizing people for their faith,” Omar added. “I look forward to building an inclusive movement for justice with you.”

The Minnesota lawmaker has also taken to retweeting a number of posts voicing support for her and suggesting the allegations of anti-Semitism go too far.

“Equating [Omar and Tlaib’s] criticism of Israel to Steve King's long defense of white supremacy is obscene (McCarthy said it's worse),” Greenwald tweeted. “In the US, we're allowed to criticize our own government: certainly foreign governments. The GOP House Leader's priorities are warped.”

Greenwald’s tweets came after McCarthy called Friday for taking action against Omar and Tlaib for their comments.

On Monday, prior to the Pelosi statement, McCarthy alleged that Democratic leaders have abdicated their responsibility and vowed that Republicans would press ahead.

"House Democrat leadership continues to be silent as Americans from both sides of the aisle condemn this rhetoric and pattern of behavior. In the face of that abdication of leadership, Republicans will take action this week to ensure the House speaks out against this hatred and stands with Israel and the Jewish people," he said in a statement.