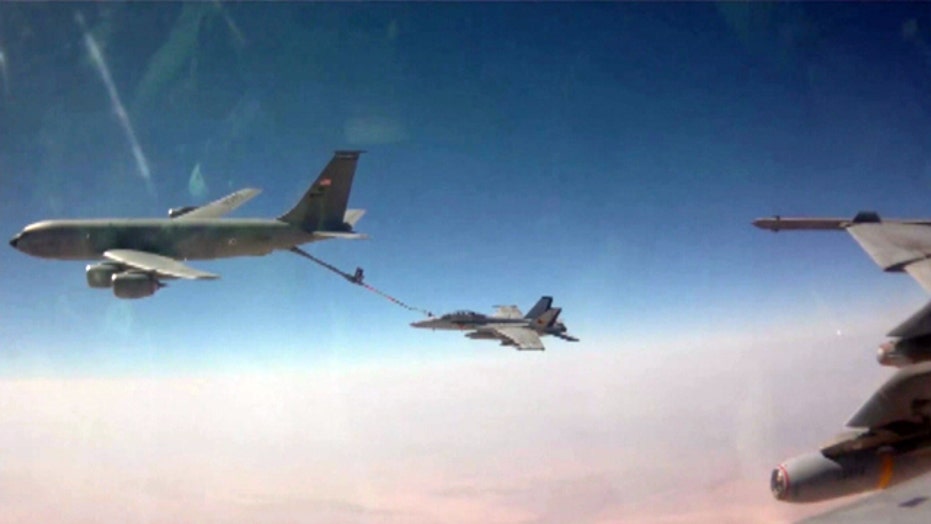 A top Defense Department official acknowledged Monday that U.S. airstrikes in Iraq are unlikely to affect Islamic militants’ “overall capabilities” or their operations elsewhere in Iraq and Syria but rebuffed calls to expand the mission.

Lt. Gen. William Mayville Jr., director for operations with the Joint Chiefs of Staff, described a stay-the-course approach during a briefing with reporters Monday afternoon. He spoke four days into a renewed U.S. airstrike campaign in northern Iraq meant to drive back militants with the Islamic State (IS), the group formerly known as ISIS.

Mayville said Air Force and Navy aircraft have conducted 15 “targeted strikes” to date and “helped check” IS advances around the cities of Sinjar and Irbil.

He said the strikes have “slowed” the group’s “operational tempo and temporarily disrupted their advances towards the province of Irbil.”

However, he said, “the strikes are unlikely to affect [IS’] overall capabilities or its operations in other areas of Iraq and Syria.”

President Obama, who is in Martha’s Vineyard, reiterated shortly afterward that the U.S. is pursuing "limited military objectives" in Iraq, saying there is "no American military solution" to the larger crisis and stressing the importance of a new inclusive government in Baghdad. To that end, he praised the decision by the country's president to bypass incumbent Prime Minister Nouri al-Maliki and name a new prime minister-designate.

Obama called this a "promising step forward," and hinted that if they "build off today's progress," U.S. efforts to join Iraqi forces in fighting IS will be "advanced."

Defense officials said four airstrikes had been conducted against Islamic militants Monday, taking out several of their checkpoints and armed trucks as well as an armed personnel carrier.

Despite calls by some lawmakers to broaden the campaign, though, Mayville said Monday the principal task remains protecting American personnel and U.S. aircraft conducting a humanitarian mission for religious minorities fleeing IS militants.

It remains unclear where the U.S. campaign will go from here. The Obama administration has come under criticism from both sides of the aisle for not acting sooner to counter the Islamic State threat, with some urging the administration to now expand the U.S. military campaign.

Senate Intelligence Committee Chairman Dianne Feinstein, D-Calif., warning the militants’ next target may be Baghdad, said Friday that “it takes an army to defeat an army.”

The president, while pledging not to put boots on the ground, acknowledged Saturday before heading to Martha’s Vineyard that it would take more than “weeks” to “solve this problem.”

“I think this is going to take some time,” the president said.

Mayville indicated military planners are not yet sure what comes next.

“As for what we might do next, we'll have to wait and see and get a better assessment on the ground before we can offer some options to the president,” he said.

But Mayville said the targeting of IS militants is going to become “more difficult” in the days ahead, as the U.S. is already seeing them “starting to dissipate and hide amongst the people.”

Meanwhile, as the U.S. weighs its next steps, Iraq was engulfed in new political turmoil Monday as Iraq's new president snubbed the powerful al-Maliki and nominated the deputy parliament speaker to form the new government.

The move, while attracting support from the Obama administration, raised fears of more infighting in the government as the country faces the threat of Sunni militants in the north.

Al-Maliki's Dawa Party rejected the nominee, Haider al-Ibadi, as al-Maliki deployed elite security forces loyal to him in the streets of Baghdad to close two main avenues and hundreds of his supporters held a rally, raising fears that he may use force to stay in power.