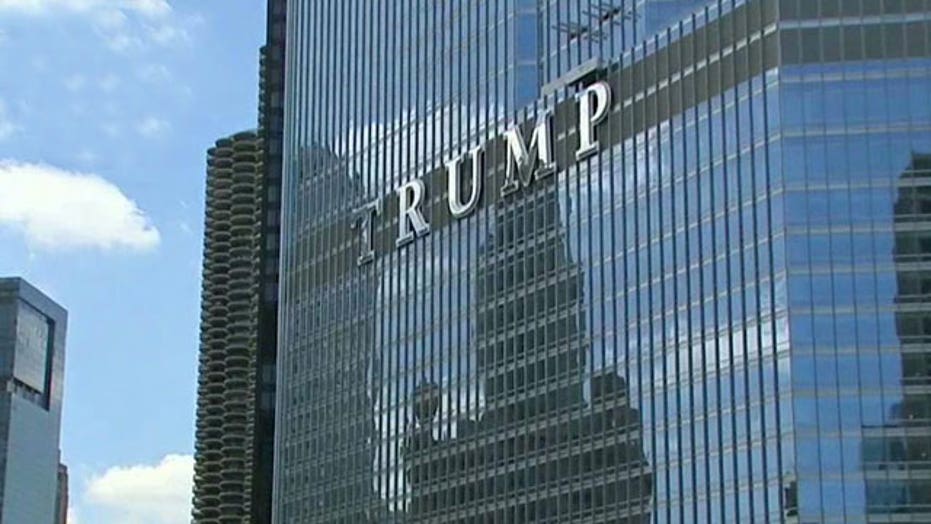 Chicago Mayor Rahm Emanuel and other city residents may not like the fact that Donald Trump put his big stamp on the “city of the big shoulders.”

But after “The Donald” put up a sign emblazoned with his last name on the city’s Trump Tower, there’s not much Emanuel or anyone else can do about it.

Trump Tower is his building, and the 20-foot letters actually are a smaller version of what the City Council said he could hang there in 2009.

So, all Emanuel can do is propose an ordinance to make sure other allegedly unsightly signs are not erected – which essentially creates a non-compete clause for Trump.

At this point, he is brushing off the controversy despite the widespread grumbling.

"What [Emanuel] is doing is he announced he is going to pass legislation that you can't do that anymore. Which means other people can't do it. That's just fine with me," Trump told Fox News.

The question at this stage is not really whether Trump can hang the sign – he already completed the paperwork. The question on the streets is whether he should have , given his brand already hangs over Manhattan, Vegas and Atlantic City.

"I don't like it," Chicago tourist Marilyn Evans said. “Because it's just too much in your face. It's, you know, someone who has a big ego."

Visitor Tyler Godbell, though, said, while crossing the Michigan Avenue bridge: "I haven't noticed it. Oh, there ... It's cool. I like it!"

Chicago Tribune columnist Eric Zorn was not so pleased. "It burns, it offends that this swollen outsider has in effect lifted his leg to mark his territory on our skyline in such a prominent way,” he said.

You only need to spin in a circle to see other brands hanging from Chicago skyscrapers: Chicago Tribune, Sun-Times and WGN.

The argument is made that the building and ego booster are an aesthetic improvement from the old Sun-Times building, which stood on that spot.

"It's not an eyesore by any means, I think," said Kevin McDonogh, pointing to the sign.

A passerby who overheard his comment asked, "Are you kidding me?" She continued before throwing her arms in the air and walking away. "It's a beautiful building. Did he need to put his name all over the front of it? It's ruined it, just ruined it. Ruined the riverfront."

Trump, though, seemed to revel in the mayor's inability to keep him from planting his flag.

As big as the Trump sign is, others aren't giving it any thought at all.

Tourist Angel Topcie said she had never even heard of Donald Trump, let alone the story behind the giant sign that bears his name.