Comedian Stephen Colbert routinely wins media cheers for his “hilarious” satirical and obviously fake interviews with President Trump, in which the talk show host splices his own questions with the president’s answers from real interviews.

Those on the left howl with laughter and folks on the other side of the political spectrum might even be forced to chuckle. But when the tables are turned, one side doesn't seem to get the joke.

Conservative commentator Allie Stuckey found out the hard way, when her satirical fake interview with liberal darling Alexandria Ocasio-Cortez was summarily condemned as a “reprehensible” act of deceit against an unwitting public.

Stuckey, with Conservative Review’s CRTV, had posted a silly “interview” on Facebook showing her grilling the New York Democratic congressional candidate about socialism and more. It was fake – Stuckey’s questions were spliced together with answers from the candidate’s widely viewed sit-down on PBS’ “Firing Line.”

But reporters called out the producers for not outright labeling the video as satire, posting numerous tweets and stories fretting about how many conservative Facebook users were fooled.

BuzzFeed raised alarm that the “doctored” interview had “gone viral” with over 1 million views in a few hours (it’s since gotten much more), without a disclaimer that the video was fake.

The Washington Post pointed to the video’s surge through the social media platform “as another example of how misleading information continues to thrive in the fast-paced flow of information online despite Facebook’s promise to better weed it out.”

The Verge cited similar concerns, while the Twitterati took aim – a Vox producer called the video “Reprehensible,” while a New York Times reporter complained the “faked interview” was “not labeled satire.”

Ocasio-Cortez retweeted the comment, adding: “Republicans are so scared of me that they’re faking videos and presenting them as real on Facebook because they can’t deal with reality anymore.”

As the outrage hit a fever pitch, the Facebook page’s disclaimer was updated from this: “Allie *grills* congressional hopeful and progressive it girl 'Alexandria Ocasio-Cortez' on her socialist agenda and knowledge of government... or lack thereof,” to include a winking emoji and this line: “Yes, this is satire created from excerpts of the viral Firing Line interview with Ocasio-Cortez.” 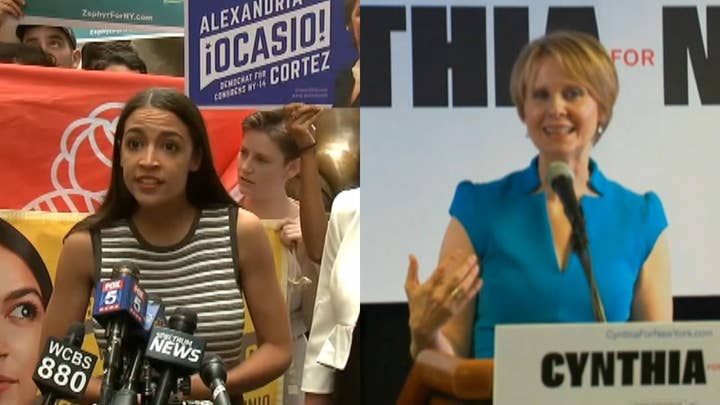 But conservative pundits – as well as more liberal-leaning voices – pushed back.

Ben Shapiro snarked at the Democratic candidate: “Someone clearly needs to undertake a forced redistribution of senses of humor so that you end up with one.”

A bit wordy, but we’ll let it stand.

“[I]f we have to start labeling stuff satire now then there are a lot of tweets and videos that need that label,” he tweeted.

There were, after all, telltale signs the interview was not real.

Much like when “Rock Bottom” treacherously spliced together Homer Simpson’s answers with a reporter’s questions about sexual harassment allegations, the backgrounds for Ocasio-Cortez and Stuckey were different.

And when Stuckey asked, “Do you have any knowledge whatsoever about how our political system works?” the candidate shook her head and said, “Mmmm.”

Forget student loans: Some colleges want your salary instead

When the interviewer asked about socialist Venezuela, Ocasio-Cortez confessed that Middle Eastern politics were not her forte. “Venezuela is not in the Middle East,” Stuckey scolded.

Stuckey, for her part, didn’t back down – retweeting her trolls, including one who said she should be “sued into bankruptcy and arrested.”

“This tactic is not something that we gave birth to ourselves,” Stuckey told “Fox & Friends First” on Thursday, citing Colbert and others (Seth Meyers also has done this). “I have no apologies for this … for the most part, people appreciated and understood the joke.”