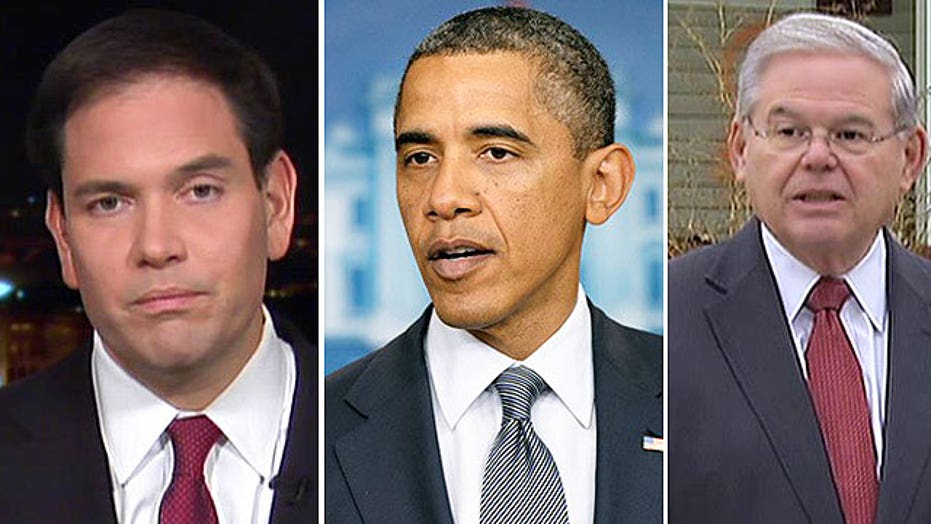 WASHINGTON – Opponents of President Obama's sudden move to re-establish ties with Cuba have little chance of scuttling his effort in Congress.

His initiative faces some strong resistance among lawmakers and opened fissures in both parties. Criticism came mostly from Republicans, who say the new policy rewards Cuba's decades-long policies of repression, human rights abuses and aggression, but some prominent Democrats voiced opposition, too.

Opponents spoke of holding up money to set up a full-service U.S. embassy in Havana, blocking Obama's nominee as ambassador to Cuba or other such steps. But even if they were to pass sweeping legislation to stop what Obama wants to do, he could veto it and they are not likely to have the votes to override a veto.

Even though the GOP will control both the Senate and House come Jan. 6, Republicans will face pressure from businesses and the farm industry — eyeing opportunities for commerce in Cuba — not to stand in the way of expanded ties.

The U.S. declared an embargo on most exports to Cuba in October 1960 and severed diplomatic relations in January 1961. Three months later Fidel Castro declared Cuba a socialist state — just a day before the doomed, U.S.-sponsored Bay of Pigs invasion meant to topple him. After the hard-line Castro became ill in 2006, his brother, Raul, took charge of the nation, fewer than 100 miles off the southern coast of Florida.

Now Obama says he will ease economic and travel restrictions on Cuba and work with Congress to end the trade embargo. This, after Cuba released American Alan Gross, who had been imprisoned for five years, and a Cuban who had spied for the U.S. In exchange, the U.S. freed three Cubans jailed in Florida.

Leahy, the top Democrat on the committee that oversees foreign aid, said that over the years he's heard members of Congress tell presidents, "Hang tough on Cuba and those Castros will be out of there any day now."

"Let's start finding out ways to at least work through our differences, embrace areas where we are alike."

Menendez, whose parents are Cuban immigrants, said Cuba is not going to reform just because Obama believes that if he extends his hand in peace, the Castro brothers suddenly will "unclench their fists."

He said Gross committed no crime, yet was imprisoned and subjected to cruel punishment for trying to help provide Internet access to Cuba's small Jewish community.

"Let's be clear, this was not a humanitarian act by the Castro regime," Menendez said. "It was a swap of convicted spies for an innocent American."

Splits were evident on the Republican side, too.

Republican leaders in the House and Senate condemned Obama's action, as did Sen. Marco Rubio, R-Fla., a Cuban-American and potential presidential candidate. Rubio said the new U.S. policy would give Cuba a needed economic lift — something "the Castro regime needs to become permanent fixtures in Cuba for generations to come."

However, Sen. Jeff Flake, R-Ariz., who also went to Cuba to accompany Gross home, said Obama's move should not be seen as a concession. "My sense is that most of my colleagues feel that we're long past due" in moderating the U.S. stance on Cuba.

As well as restoring diplomatic relations, Obama plans to ease travel restrictions to Cuba for family visits, government business and educational activities, while tourist travel remains banned. Only lawmakers can revoke the trade embargo, though, and that appears unlikely to happen soon.