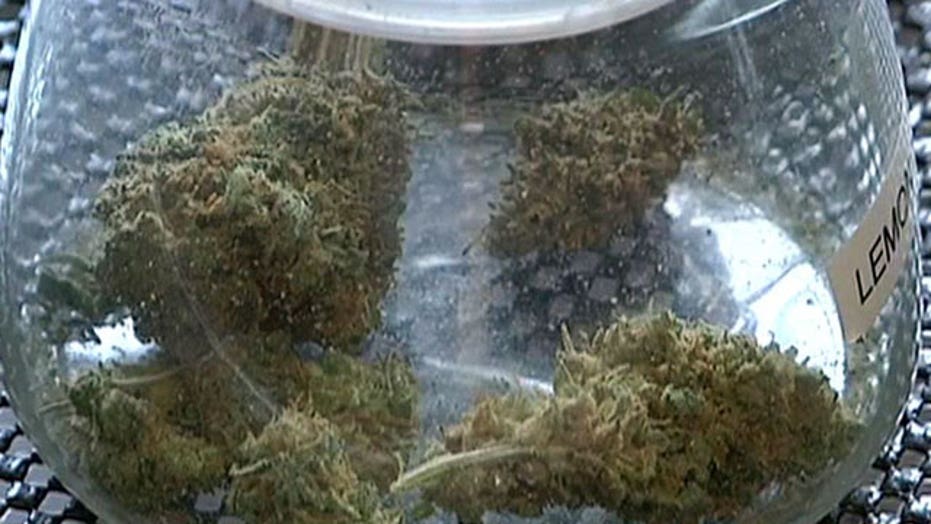 States are fighting a new kind of border battle against marijuana trafficking. The weed used to come from Mexico -- now, it's coming from Colorado.

Ever since Colorado legalized pot, law enforcement officers in surrounding states have noticed a surge in marijuana being brought across state lines.

And it's causing headaches, as the other states face rising costs associated with arresting and processing those who mistakenly think they can get away with transporting marijuana purchased legally in Colorado.

"One of the [arguments] for legalizing marijuana [in Colorado and Washington state] ... was to reduce the black market," said Tom Gorman, who heads a multi-state task force called the Rocky Mountain High Intensity Drug Trafficking Area. "In fact, the legalized marijuana has become the black market for other states."

Mark Overman, the sheriff for Scotts Bluff County in Nebraska, said the trafficking is likely an "unintended consequence" of Colorado's decision last November, "but it was a completely predictable consequence."

Like other parts of the nation, Overman says there's always been illegal marijuana in his county, which sits some 50 miles north of the Colorado border in Nebraska. He says the main source used to be international.

"Primarily it was coming from Mexico and drug trafficking organizations in Mexico. But probably starting in about 2012 was when we really became aware of the Colorado connection."

Most of the areas that border Colorado are rural, and officials in those regions now say dealing with all the marijuana coming out of Colorado is breaking their small budgets.

"Putting people in jail, prosecuting them, that costs us money," Overman said. "Officers go to court, that's overtime. We may have to defend these people, and we're paying for their defense in many cases."

Nebraska Attorney General Jon Bruning said he won't rule out the possibility of taking Colorado to court to ask for reimbursement for the costs of dealing with a problem its neighbor created.

The feds are keeping an eye on the issue.

In August of last year, the Justice Department issued a press release addressing the legalization of recreational marijuana in Colorado and Washington. Despite the fact the drug is still illegal at the federal level, the department said it had "informed the governors of both states that it is deferring its right to challenge their legalization laws at this time," as long as certain conditions were met.

One of those conditions was "implementing effective measures to prevent diversion of marijuana outside of the regulated system and to other states."

Eight months later, Michele Leonhart, head of the Drug Enforcement Administration, told the Senate Judiciary Committee the amount of "legal" marijuana crossing Colorado's state lines is definitely increasing. "The trends are what us in law enforcement had expected would happen," she told the committee.

In a statement to Fox News, the DEA said: "Our efforts will continue to be guided by the enforcement priorities set forth in the August 29, 2013 guidance memorandum which include preventing the diversion of marijuana from states where it is legal under state law in some form to other states."

Denver criminal defense attorney Sean McAllister, a spokesman for the Colorado chapter of the National Organization for the Reform of Marijuana Laws, said profiling of people with Colorado license plates makes the problem look worse than it is.

"I know of several instances of clients of mine that have told me that first thing that they're asked when they're pulled over in Kansas is, 'Hey, you're from Colorado. Where's the marijuana?'" he said.

He added: "I think that there is an inherent bias in law enforcement against marijuana and they're looking for reasons to show that legalization is a problem. So they want to stop people and profile people to show that all these people are bringing marijuana from Colorado."

Gorman called that theory "interesting," but "basically a bunch of bull."

He said: "On a traffic stop the officer comes up, finds something suspicious, maybe a smell or something like that. So it's kind of random. And they estimate we get about 10 percent of what gets through."

Overman, who heads a narcotics task force in western Nebraska, also denies that people with Colorado license plates are being targeted. "We're not profiling anybody and we haven't mounted any large offensive to get [Colorado marijuana]. We're just finding it more often."

In fact, Overman points out, "When you ... look at our data, most of the people we are apprehending with Colorado marijuana are not from Colorado. The top five states does not include Colorado cars."

The sheriff said people know marijuana is legal in Colorado, "so they go there, get it and bring it back." Then, he said, many of them are "bringing it back to sell."

He believes one reason is the increasing potency of Colorado pot. "The Netherlands has the cap of 15 percent THC [for its legal marijuana]. Colorado has no such cap. You can find advertising in Colorado right now where they're advertising smokable [pot] in the upper 20's -- 28 percent THC."