CNN labeled embattled Virginia Democrat Gov. Ralph Northam as a Republican in a chyron during a segment about his apology after his 1984 medical school yearbook page that showed him dressed either in blackface or in a KKK robe. (Twitter)

CNN -- the network that promotes the hashtag #FactsFirst -- mislabeled embattled Virginia Gov. Ralph Northam as a Republican on Friday during a segment about the Democrat's apology for his racist 1984 medical school yearbook photo.

The photo showed two men holding beers -- one dressed in blackface, the other in a KKK robe -- but Northam never made clear which one was him.

The CNN chyron that mistakenly called Northam a Republican aired Friday during "Anderson Cooper 360," the nightly show hosted by Anderson Cooper. The segment focused on a video in which Northam apologized for the nearly 35-year-old photograph.

“My fellow Virginians, earlier today I released a statement apologizing for behavior in my past that falls far short of the standard you set for me when you elected me to be your governor. I believe you deserve to hear directly from me,” Northam said in a video he posted on Twitter.

“That photo and the racist and offensive attitudes it represents does not reflect that person I am today or the way that I have conducted myself as a soldier, a doctor, and a public servant. I am deeply sorry,” he continued. “I cannot change the decisions I made nor can I undo the harm my behavior caused then and today. But I accept responsibility for my past actions, and I am ready to do the hard work of regaining your trust.” 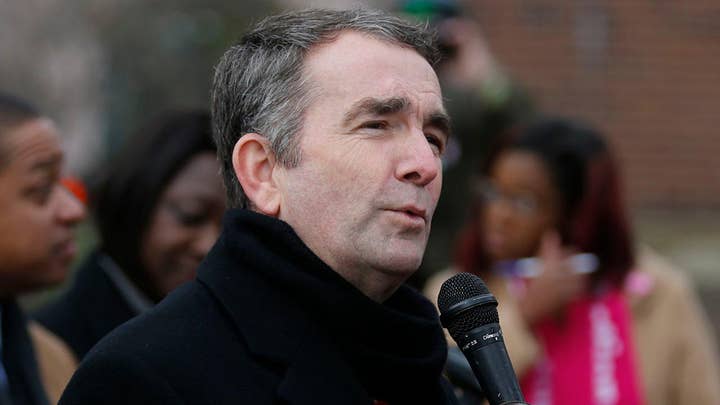 But the error was included without acknowledgement in Cooper's tweet of the segment:

The unearthed photo of Northam, who admitted being one of the men in the picture, sent shockwaves across the country.

Fox News obtained a copy of the 1984 yearbook page from the Eastern Virginia Medical School library. Northam graduated from the school that year. The Virginian-Pilot, the Washington Post and the Richmond Times-Dispatch also reported they independently confirmed the authenticity of the page.

The quote on the page says, “There are more old drunks than old doctors in this world so I think I’ll have another beer.”

Politicians on both sides said Northam should step down from his position, including presidential hopefuls Sen. Kamala Harris, D-Calif., and Julian Castro.

RALPH NORTHAM'S RESIGNATION DEMANDED AMID YEARBOOK CONTROVERSY: ‘THIS BEHAVIOR WAS RACIST AND UNCONSCIONABLE’

“Leaders are called to a higher standard, and the stain of racism should have no place in the halls of government,” Harris tweeted. “The Governor of Virginia should step aside so the public can heal and move forward together.”

U.S. Sen. Cory Booker, D-N.J., who launched his 2020 presidential candidacy earlier in the day, said the photo has eroded confidence in Northam's ability to lead the state.

"These images arouse centuries of anger, anguish, and racist violence and they’ve eroded all confidence in Gov. Northam’s ability to lead. We should expect more from our elected officials. He should resign," Booker tweeted.

Northam’s statement didn’t indicate whether he will be resigning amid the controversy.