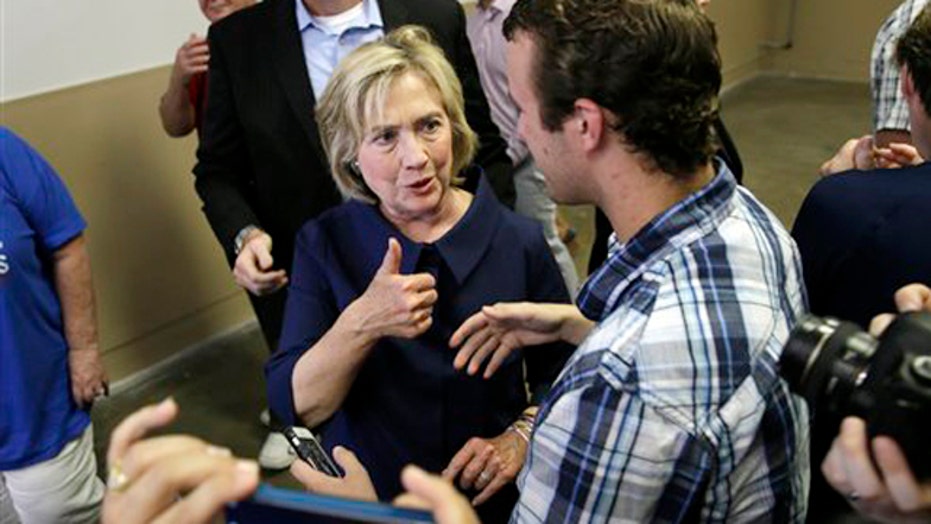 Is the Clinton campaign ready for a restart?

Another campaign, another reset for Hillary Clinton's public image.

This time, the former first lady and senator who's been in the public eye for three decades is said to be getting a political makeover in a bid to show a gentler, more personal side of the now-Democratic presidential candidate.

But whether another image overhaul can revive her sagging campaign, and change the public's deep-rooted perception of her, remains to be seen -- considering her political handlers have been down this road before.

“The challenge is to make those times when she connects with voters more frequent, to make her the best candidate she can be all of the time, or more often than not," Democratic pollster Ben Tulchin, who worked on Howard Dean’s 2004 Democratic presidential campaign, said. "There have been moments in which that side of Hillary has emerged."

But Tulchin acknowledged the fundamental hurdle for Clinton's 2016 team: "It's a challenge to remake a politician who has been in the public spotlight for 25 years."

The New York Times first reported that the Clinton campaign was looking to show another side of Clinton, including more "humor" and "heart." This comes after several early stumbles -- including her prickly responses to persistent questions about her email controversy and the roping off of crowds at a July 4 parade in New Hampshire.

The latest transformation began Tuesday with Clinton issuing an unequivocal apology for using a personal email system while secretary of state.

“That was a mistake,” Clinton told ABC News. “I’m sorry about that. I take responsibility.”

Clinton’s contrition, and her getting emotional when talking about her late mother, followed her declining twice in four days to publicly apologize. "What I did was allowed,” she told The Associated Press on Monday.

The effort to re-invent Clinton comes amid some ominous poll results -- including a Quinnipiac University survey last month that found “liar,” “dishonest,” “untrustworthy” and “criminal” among the words that voters most frequently associate with her.

Some were skeptical at the campaign's plans. Ex-Obama political adviser David Axelrod mocked the strategy on Twitter.

This is not the first time Clinton has tried to show a softer, more everywoman side, dating back to her days as first lady of Arkansas.

After husband Bill Clinton lost the governorship and was running again in 1982, Hillary Clinton started wearing makeup, updated her wardrobe and began introducing herself as Mrs. Bill Clinton, not Hillary Rodham, author-journalist James B. Stewart wrote in his 1997 book “Blood Sport.”

“Hillary got the message that Arkansas voters didn’t like women to flaunt their independence,” wrote Stewart, paraphrasing what Clinton friend Susan McDougal told him.

A decade later, as Bill Clinton was running for president, Clinton famously showed that independent streak again. In an interview with Steve Kroft in 1992 exploring allegations of an affair with Gennifer Flowers, Hillary Clinton said: "I'm not sitting here some little woman standing by my man like Tammy Wynette." She added, "I'm sitting here because I love him and I respect him."

This past spring, Clinton attempted to use her memoir, “Hard Choices,” to again show her softer side, sharing stories about the birth of her one and only granddaughter.

“After a while, Bill and I stepped out into the hallway to let them rest,” Clinton writes about her and her husband’s reaction to the infant being delivered. “We sat quietly, holding hands, trying to process the rush of emotions. I looked over and saw a tear in Bill's eye.”

Clinton later started talking more about being a grandparent, and about coloring her hair. And she got into some hot water when she tried to make her family's finances seem relatable. In June, the former first lady and New York senator defended her six-figure speaking fees by saying she and her husband left the White House in 2001 “dead broke” due to legal expenses.

Clinton, who with her husband is a millionaire, said weeks later that she regretted the comment and that it was “inaccurate.”

Whether Clinton can succeed in connecting on a personal level with voters is an open question, though she has done so before if only for a short while.

After losing the 2008 Iowa caucuses to Democratic challenger Barack Obama, Clinton became emotional on the eve of the New Hampshire primary weeks later.

“It's not easy," said Clinton, her voice quivering. “I couldn't do it if I didn't passionately believe it was the right thing to do. This is very personal for me. I have so many ideas for this country and I just don't want to see us fall backwards. It's about our country; it's about our kids' future.”

She went on to win the primary. But Obama won next in South Carolina, and months later secured the nomination.