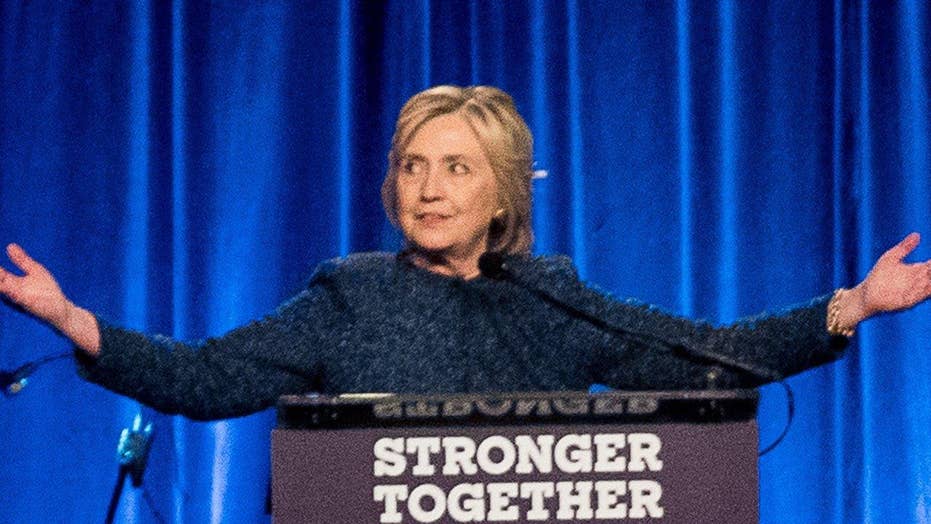 Hillary Clinton expressed “regret” Saturday for saying half of Republican presidential rival Donald Trump’s supporters could be put into a "basket of deplorables."

Clinton, the Democratic presidential nominee, said in her apology that she was “grossly generalistic” in criticizing Trump supporters, using that same phrase Friday night when attacking them at a New York fundraiser.

“Racist, sexist, homophobic, xenophobic, Islamaphobic, you name it,” Clinton said Friday. “There are people like that, and (Trump) has lifted them up.”

Clinton, in her apology, also said: “I regret saying ‘half’ -- that was wrong. But let's be clear, what's really ‘deplorable’ is that Donald Trump hired a major advocate for the so-called ‘alt-right’ movement to run his campaign and that David Duke and other white supremacists see him as a champion of their values.”

Her comments have dominated the weekend news cycle and are being compared to those 2012 GOP presidential nominee Mitt Romney made at a private fundraiser about “47 percent of people voting for (President Obama) no matter what.”

Romney in his comments, which were also made public in mid-September, characterized such voters as those “dependent upon government, who believe that they are victims, who believe the government has a responsibility to care for them.”

He later acknowledged to Fox News that the secretly-recorded comments “did real damage to my campaign."

Trump, whose campaign has suffered as a result of personal attacks on voters, and others roundly criticized Clinton's remarks.

“Wow, Hillary Clinton was SO INSULTING to my supporters, millions of amazing, hard-working people” Trump tweeted. “I think it will cost her at the Polls!”

Trump's criticism last month of a Muslim woman, the mother of a U.S. solider killed in Iraq, was followed by his sharp drop in the polls.

The woman, Ghazala Kahn, stood silently on the stage of the Democratic National Convention as husband Khizr Khan, the father of the fallen soldier, criticized Trump for his proposal to temporarily ban Muslims from entering the United States and questioned whether Trump had read the Constitution.

“The men and women who support Donald Trump's campaign are hard-working Americans, farmers, coal miners, teachers, veterans, members of our law enforcement community, members of every class of this country,” continued Pence, at the annual gathering of conservatives in Washington, D.C., known as the Value Voters Summit.

Republican National Committee Chairman Reince Priebus said: “Insulting everyday Americans to a group of wealthy donors shows whose priorities Clinton really has in mind. ... Millions of Americans are supporting Donald Trump because they are sick of corrupt career politicians like Hillary Clinton.”

And Trump campaign manager Kellyanne Conway called for an apology.

Clinton was speaking at an LGBT fundraiser in New York City, where she also encouraged supporters to "stage an intervention" if they have friends considering voting for Trump.

"That may be one conversion therapy I'd endorse," said Clinton, referring to a type of counseling designed to urge gay, lesbian, bisexual or transgender children to change their sexual orientation. She later clarified that she wants to end the practice.

Singer Barbra Streisand, who performed at the fundraiser, altered the lyrics of the Stephen Sondheim song "Send in The Clowns" to mock Trump, referring to the real estate mogul as a "sad, vulgar clown."

On Saturday, Democratic vice-presidential nominee Virginia Gov. Tim Kaine tried to explain his running-mate's comments, while suggesting they won’t hurt the campaign’s effort to win over disaffected voters and that Clinton didn’t need to apologize.

I’m generalizing here, but a lot of (Trump’s) support is coming from this odd place, that he’s given a platform to the alt-right and white nationalists,’” Kaine told The Washington Post. “But then (Clinton) went on to say, ‘Look, there’s also a number of his supporters that have economic anxieties, and we’ve got to speak to those.’ ”

Clinton campaign spokesman Nick Merrill late Friday defended Clinton in tweets of his own, arguing that his candidate was referring to half of Trump’s event attendees.

"Obviously not everyone supporting Trump is part of the alt-right, but alt-right leaders are with Trump," he said. "And their supporters appear to make up half his crowd when you observe the tone of his events.”