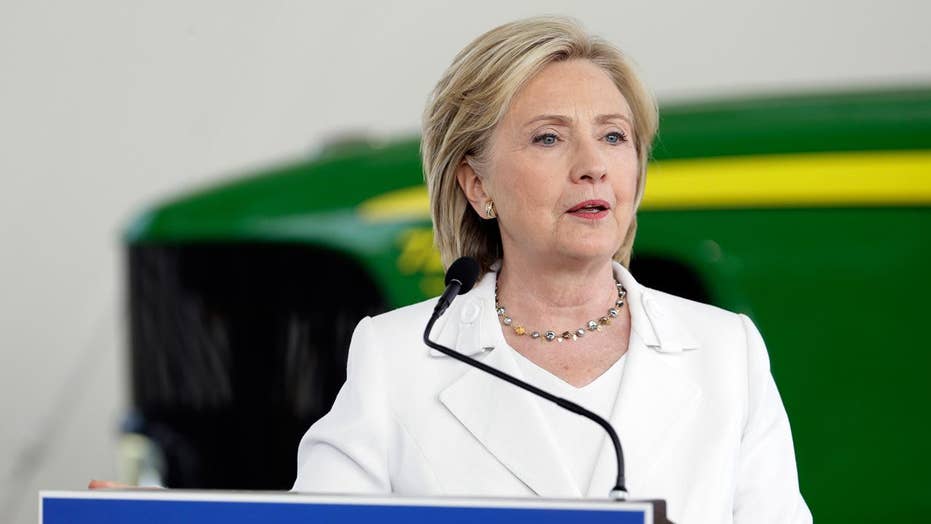 Former Trump 2016 spokesperson Katrina Pierson weighs in on Hillary Clinton’s new tell-all book ‘What Happened’, in which she lashes out at several notable people for her 2016 election loss.

Hillary Clinton seemed to add Benghazi to her already-long list of culprits to blame for her upset loss to Donald Trump last November, on the heels of the five-year anniversary of the terror attack.

In her first live interview since the election timed with the release of her new memoir “What Happened,” Clinton on Wednesday brought up the controversy over the Benghazi terror attack in response to a question about her likability.

Clinton said she was unfairly criticized, even suggesting the incident was no different than past tragedies dating back to the Reagan administration.

“Take the Benghazi tragedy—you know, I have one of the top Republicans, Kevin McCarthy, admitting we’re going to take that tragedy—because, you know, we’ve lost people, unfortunately, going back to the Reagan administration, if you talk about recent times, in diplomatic attacks,” Clinton told Matt Lauer and Savannah Guthrie on NBC’s “Today." “But boy, it was turned into a political football. And it was aimed at undermining my credibility, my record, my accomplishments.”

Clinton's reference to House Majority Leader McCarthy was an apparent swipe at his 2015 boast that the Benghazi committee was hurting Clinton politically. And her mention of Reagan administration-era attacks was likely a reference to the bombing of the U.S. embassy in Beirut, in which 17 Americans were killed.

However, the criticism of the Obama administration after the 2012 Benghazi attack in which four Americans were killed was based on several factors.

Specifically, the Clinton State Department was faulted for ignoring security concerns in the run-up to the attack, contributing to the poor defense posture at the post. The Accountability Review Board that examined the tragedy concluded there were “Systemic failures and leadership and management deficiencies at senior levels” at the department that “resulted in a Special Mission security posture that was inadequate for Benghazi and grossly inadequate to deal with the attack that took place.”

Fox News also reported Tuesday that contractors said they were pressured to stay quiet about security lapses by the State Department.

“It is disgusting for her to downplay it, and I think the American people knew it. She did nothing about it at the time, and this tragedy was entirely preventable, except her State Department was inept in protecting Americans in Benghazi,” Chaffetz told Fox News. “I’m sure she can’t even look in the mirror and face the fact that, on her watch, they lost four Americans, and it’s disgusting she can’t live up to it, even today.”

Chaffetz noted that during the time of congressional probes into the handling of the terror attack, she infamously said “what difference at this point does it make?” about the assault's origin.

“I think she really did believe that,” Chaffetz said. “She showed today that her comment about ‘what difference does it make’ was truly how she felt.”

The uncle of foreign service officer Sean Smith, who was killed in Benghazi, also criticized her comments.

"She's been in plausible deniability about Benghazi ever since it happened," Michael Ingmire told Fox News. "She was standing, basically before the coffins of Americans, blaming a horrible anti-Islamic video, but she's just being consistent with her psychosis. The liar, the criminal, the crooked politician -- those are the three faces of Hillary."

Following her Benghazi comments in Wednesday's interview, Clinton pivoted to warn Americans about the “threat” the right poses to the United States.

“The idea among some that I really do take seriously is the threat posed by the right to this country,” Clinton said, pointing to conservatives as another factor for her loss.  “To our economic equality, to our civil rights—I take it really seriously. It’s not just a political issue for me, and they are constantly trying to undermine me.”

Clinton, in her memoir and in media appearances promoting it, has taken some blame for her loss while also casting blame on a broad cast of figures and forces -- including former FBI Director James Comey, Russia, primary rival Bernie Sanders and more.

Matt Lauer asked Clinton whether she thought she made enough mistakes on her own to lose the election.

“I will say no, Matt,” Clinton said. “This book has a lot of behind the scenes looks at what it’s like to run for president particularly as a woman.”