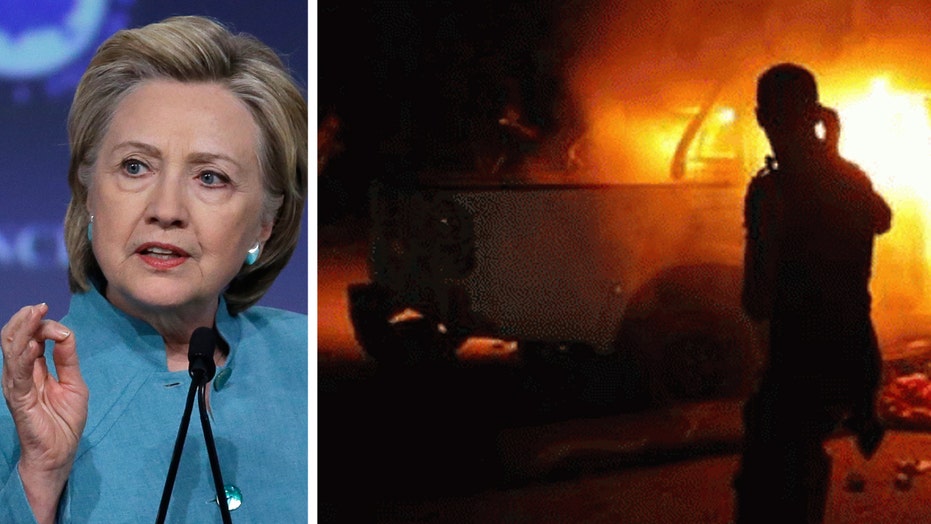 Hillary Clinton claimed Tuesday that the final report issued by the House Republican investigation into the deadly Sept. 11, 2012, Benghazi terror attack — in which Clinton is accused of knowingly misleading the American public —  “had found nothing,” and that it’s time to “move on.”

The report released Tuesday morning pointedly blamed a “rusty bureaucratic process” for the Obama administration’s slow-moving response the night of the attack. The report said that despite orders from President Obama and then-Defense Secretary Leon Panetta to deploy assets in response to the attack on the compound to aid Ambassador Chris Stevens, his staff and security personnel, the first military force did not do so until more than 13 hours after the attack started.

Nonetheless, Clinton and her allies worked to sweep aside the committee’s damning, 800-page report, attempting to cast the investigation as nothing more than a political exercise.

“I understand that after more than two years and $7 million dollars spent by the Benghazi committee, out of taxpayer funds, it had to today report it had found nothing, nothing to contradict” prior findings, said Clinton, who was campaigning in Denver.

“There’s only one remaining question, and it’s simply this: is the RNC going to disclose the in-kind contribution that they have received from House Republicans today,” he said, claiming the investigation was meant to “tear down Secretary Clinton’s poll numbers.”

“You can read this report in less time than our fellow citizens were taking fire and fighting for their lives on the rooftops and in the streets of Benghazi,” he also said in a written statement.

Meanwhile, accusations were flying on both sides of the aisle as the document became an inevitable political football on the 2016 field.

The Republican Party said the report demonstrates a "politically-motivated cover up" by Clinton and the administration.

Donald Trump, the presumptive Republican presidential nominee, did not immediately respond to the report -- but later weighed in on Twitter.

"Benghazi is just anotherHillary Clinton failure. It just never seems to work the way it's supposed to with Clinton," he tweeted.

Clinton and her campaign dismissed the document outright.

"The Republicans on the House Benghazi Committee are finishing their work in the same, partisan way that we've seen from them since the beginning,” Clinton spokesman Brian Fallon said in a written statement. “In refusing to issue its report on a bipartisan basis, the Committee is breaking from the precedent set by other Congressional inquiries into the Benghazi attacks.”

The report faulted the Obama administration for a range of missteps before, during and after the 2012 attacks in Benghazi, Libya that led to the deaths of Stevens, foreign service officer Sean Smith and former Navy SEALs Ty Woods and Glen Doherty.

The report said one anti-terrorism security team known as the FAST unit sat waiting for three hours in Rota, Spain, as Marines changed “in and out of their uniforms four times,” and even debated whether they should carry personal weapons, according to one witness. All together, the report said, “it would take nearly 18 hours” for that team to move.

The report described a web of internal debates and hold-ups, including apparent State Department guidance that “Libya must agree to any deployment,” though Panetta would later say Libya approval was not necessary.

And while various officials debated how to proceed — and U.S. personnel were under attack at two sites in Benghazi — the report said Clinton and other officials were occupied with pushing a narrative that an anti-Islam YouTube video was the reason for the attack, a claim the administration later retracted.

The report also said Clinton told the Egyptian prime minster they knew the attack had nothing to do with the film and was a planned attack – despite statements being made by her and others referencing the video.

At the press conference, Gowdy and other GOP lawmakers lamented that none of the assets placed on the ready by Obama and Paneta were ordered to Benghazi.

“Nothing was ever coming to Benghazi,” Gowdy said.

Lawmakers contrasted the "heroism" of those on the ground with the discussions in Washington. Rep. Peter Roskam, R-Ill., described the D.C. attitude as "near fecklessness." He said, "They were more concerned about how they’re going to offend the Libyan government than how this rescue is going to take place.”

Republican National Committee Chairman Reince Priebus blamed Clinton outright, saying she was “in charge, knew the risks and did nothing.”

“Together the report’s findings make clear we cannot afford to let Hillary Clinton be our next commander-in-chief,” he said. Appearing on MSNBC, Gowdy said Democrats “will be shocked when they read the report, if they do bother to read the report.”