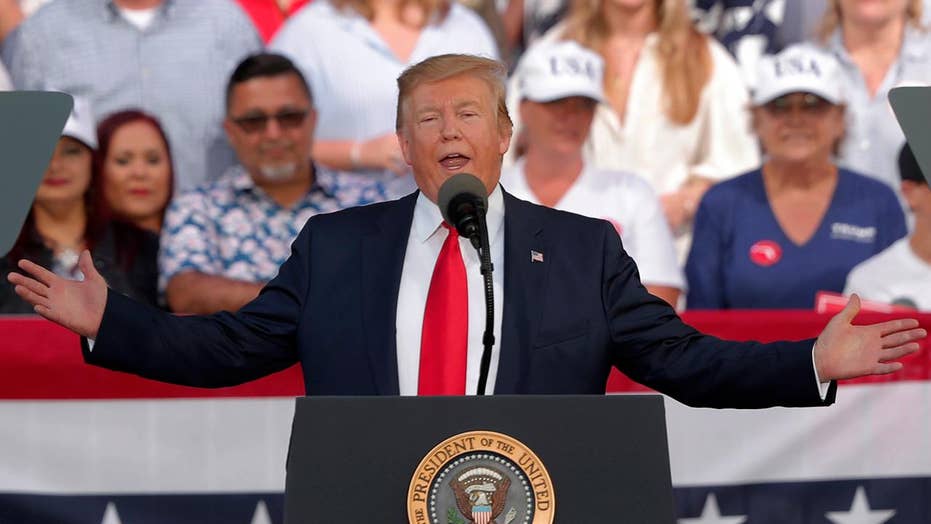 With less than eight hours to go until the Trump administration is set to implement a crippling new volley of tariffs on Chinese goods, trade representatives from the U.S. and China were sitting for high-stakes talks in Washington, D.C. on Thursday evening -- even as President Trump warned that he had "no idea" what will transpire.

Before this week, both the U.S. and China said the trade talks were making steady progress, giving the impression that the world's two biggest economies were approaching an agreement. But on Sunday, Trump announced on Twitter that he plans to raise tariffs and have them cover all products imported from China, as of Friday.

That move -- which would hike tariffs from 10 percent to 25 percent on some $200 billion worth of Chinese goods -- dramatically escalated a trade war that has been stewing since last summer, when the U.S. implemented its first round of tariff increases, citing widespread Chinese intellectual property theft. Markets worldwide slid on the news.

Trump initially raised duties on $250 billion of Chinese imports starting in July over complaints Beijing steals or pressures companies to hand over technology. That included a 25% charge on $50 billion of goods and 10% on $200 billion.

The move had bipartisan support. In an interview last June, Senate Minority Leader Chuck Schumer, D-N.Y., ordinarily a fierce Trump critic, agreed with the administration's China policy and said that the country "takes total advantage" of the U.S.

On Thursday, China vowed to defend its interests and retaliate with "necessary countermeasures" if the increases take effect Friday as planned.

CHINA: WE FIND TRUMP 'VERY CONFUSING,' UNSURE HOW TO PROCEED AMID TRADE DISPUTE

Existing Trump tariffs have already devastated many factories in Chinese coastal regions that serve the U.S. market. Industries such as electronics have seen sales to the U.S. plummet up to 40%. Overall Chinese exports to the U.S. dropped 13% in April from a year earlier.

"If the tariffs rise to 25 percent, then we're done for," one sales manager for a computer monitor manufacturer in Shenzhen, China's southern tech hub, said in an interview with The Associated Press.

Separately, the Trump administration is also pressing Beijing to roll back plans for government-led creation of Chinese global competitors in robotics, electric cars and other technologies. The United States, Europe, Japan and other trading partners say those violate Beijing's market-opening commitments.

Trump said Thursday that the Chinese wanted to come back to continue negotiations. He added that if it doesn't work out, the U.S. has an "excellent" alternative.

Trump also said that Chinese President Xi Jinping sent him a "beautiful letter" and he will "probably" speak to him on the phone.

But Trump added: "I have no idea what's going to happen."

On Wednesday, though, Trump wrote on Twitter that he knows of at least one development that won't happen: the election of Joe Biden to the presidency. Trump mused that China had been hoping Biden would win so that the country could obtain more favorable trade terms, and "continue to rip off the United States."

"Guess what, that’s not going to happen!" Trump added.

In an exclusive interview with Fox News last week, Trump signaled that the issue might be pivotal in the upcoming 2020 presidential race. The president specifically slammed remarks by Biden, now the Democratic frontrunner, that seemingly downplayed the threat posed by China.

Steve Hilton follows up on his Swamp Watch segment about Joe Biden.

Reacting to those comments, Trump said Biden was among many politicians "naive" about China. "For somebody to be so naive, and say China's not a problem -- if Biden actually said that, that's a very dumb statement."

Trump said China "took advantage of us on trade like nobody in history has ever taken advantage of anyone," but revealed that an agreement amid the country's ongoing trade war with the U.S. could be imminent.

Asked by Fox News Chief Intelligence Correspondent Catherine Herridge about the possibility of a June summit with his Chinese counterpart Xi Jinping, Trump was optimistic.