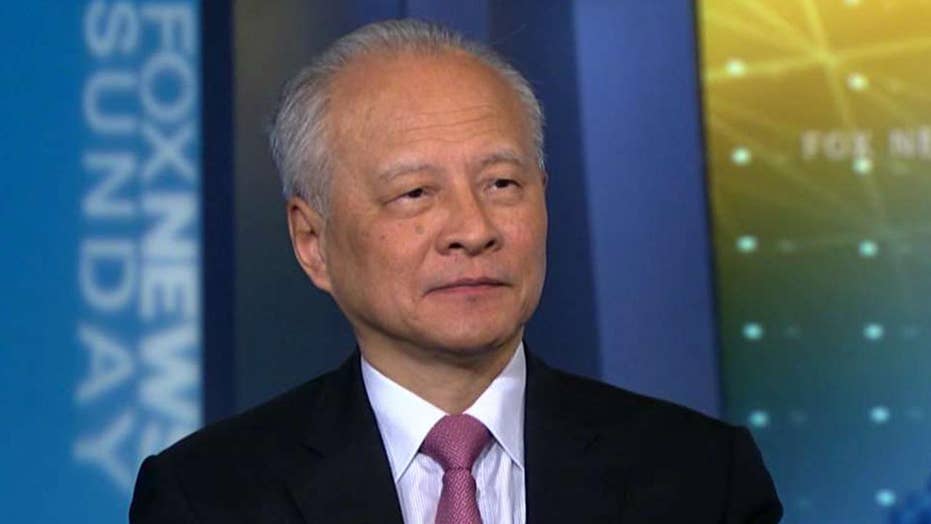 China's ambassador to the US talks trade tensions

Cui Tiankai, Chinese ambassador to the U.S., on tariffs, tensions between Beijing and Washington.

Cui added that U.S. warships are "on the offensive" near China, days after a U.S. destroyer nearly collided with a Chinese military vessel in the South China Sea. The Pentagon said the Chinese ship came within 45 yards of the U.S. destroyer, in an intentionally "unsafe" maneuver.

Cui's comments come as Chinese President Xi Jinping and Trump prepare for a possible meeting at the G20 summit in Buenos Aires, Argentina, next month, amid a rapidly escalating trade conflict between the two nations that some have called a new cold war.

Asked by host Chris Wallace whether Trump listens primarily to hardliners like trade director Peter Navarro -- who has characterized China as the economic "parasite of the world" -- or moderates like chief economic adviser Larry Kudlow and Treasury Secretary Steven Mnuchin, Cui responded simply, "You tell me."

The envoy added that other ambassadors seemingly have the same issue. President Trump has repeatedly said he tries to avoid "telegraphing" his moves to foreign adversaries.

"Honestly, I’ve been talking to ambassadors of other countries in Washington, D.C., and this is also part of their problem," Cui said. "They don’t know who is the final decision-maker. Of course, presumably, the president will take the final decision, but who is playing what role? Sometimes it could be very confusing." 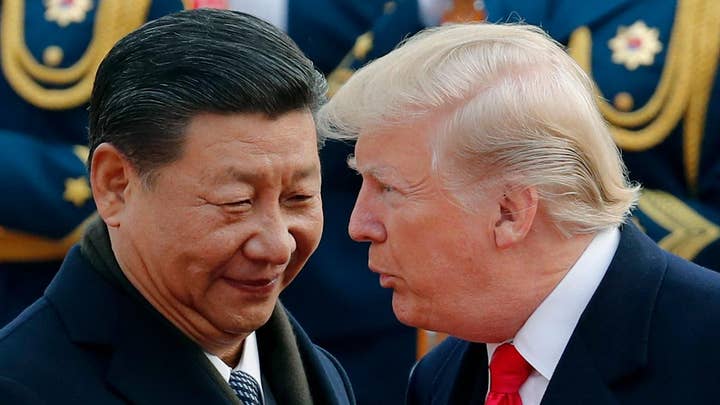 Trump, citing widespread intellectual property theft in China that cuts into the profits of U.S. companies doing business there, placed tariffs on approximately $200 billion of Chinese imports in September, following his imposition of significant tariffs on nearly $35 billion in Chinese goods in July. China quickly retaliated with $60 billion in tariffs of its own.

The White House has bipartisan support for hitting back at Chinese intellectual property theft. In an interview in June, Senate Minority Leader Chuck Schumer, D-N.Y., ordinarily a fierce Trump critic, agreed with the administration's China policy and said that the country "takes total advantage" of the U.S.

And the president has insisted his tariffs are already having a major impact. 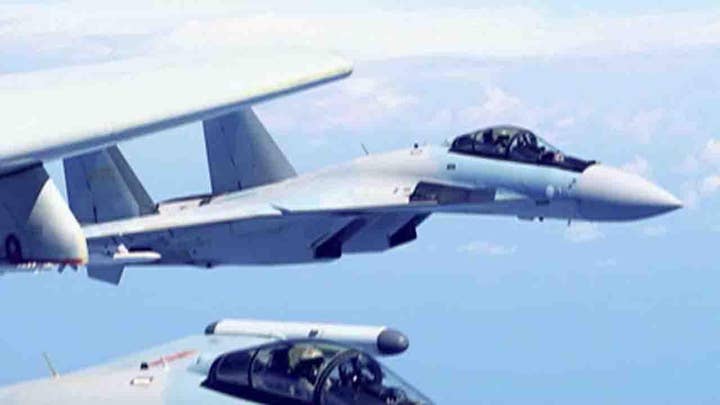 "Their economy has gone down very substantially, and I have a lot more to do if I want to do it," Trump told "Fox & Friends" last week. "They lived too well for too long and, frankly, I guess they think the Americans are stupid people. Americans are not stupid people. We were led badly when it came to trade."

WATCH: HAS US ENTERED NEW COLD WAR WITH CHINA?

But in his interview with Fox News, Cui denied that China permits or engages in widespread intellectual property theft, and said even the suggestion was an affront to the country's population.

"I think all of these accusations about how China has developed are groundless and not fair to the Chinese people," he told Wallace. "You see, China has 1.4 billion people. It would be hard to imagine that one-fifth of the global population could develop and prosper not by relying mainly on their own efforts, but by stealing or forcing some transfer of technology from others -- that’s impossible."

"It’s important to notice who started this trade war. We never want to have a trade war."

He added: "It’s important to notice who started this trade war. We never want to have a trade war, but if somebody started a trade war against us, we have to respond and defend our own interests."

Concerns have been raised that China, the largest foreign holder of U.S. Treasurys, might start dumping its holdings as a way to pressure the United States in the trade dispute. But Mnuchin said this possibility didn't concern him because it would be contrary to Beijing's economic interests to start dumping its Treasury holdings, and would be "very costly" to China.

Top U.S. officials have warned that the ongoing conflict with China extends beyond trade. In Senate testimony on Wednesday, FBI Director Christopher Wray said that "China, in many ways, represents the broadest, most complicated, most long-term counterintelligence threat we face."

He added that "Russia is ... fighting to stay relevant after the fall of the Soviet Union," while "China is fighting tomorrow's fight…and it affects every sector of our economy."

Vice President Pence, meanwhile, has accused China of trying to interfere with U.S. elections, including by targeting tariffs toward industries that support Trump and even spreading propaganda in U.S. media outlets. 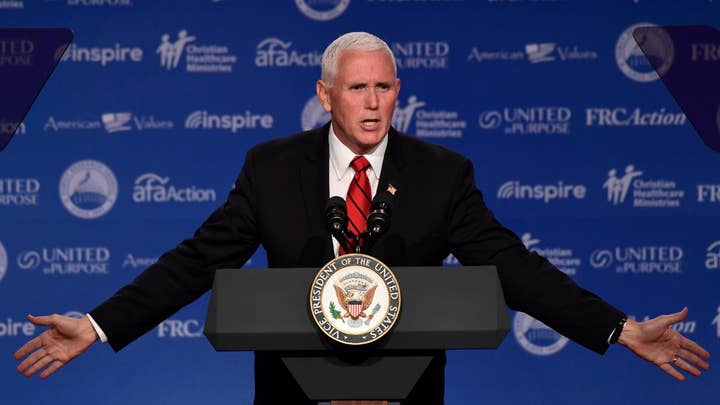 "You see, Chinese media, they are just learning from America media to use all these means, to buy commercial pages from newspapers, to make their views known or to cover what is happening here," Cui said. "This is normal practice for all the media." (China does not generally permit foreign-owned media companies to buy such political inserts in its own domestic papers.)

The envoy also said that Chinese warships, which harassed and nearly collided with a U.S. destroyer recently in the disputed South China Sea, had responded appropriately to an intervention on their "doorstep." Beijing has built up military fortifications on two contested Chinese man-made islands there despite pledging not to do so.

"Where the incident took place, you were right to say it was in South China Sea. So it’s at China’s doorstep," Cui told Wallace. "It’s not Chinese warships that are going to the coast of California, or to the Gulf of Mexico. It’s so close to the Chinese islands and it’s so close to the Chinese coast. So who is on the offensive? Who is on the defensive? This is very clear."

Cui said, however, that China would continue to "faithfully" implement sanctions against its longtime ally, North Korea, in order to restore stability to the region. He  said a "coordinated, phased, and step-by-step approach" to North Korean denuclearization is the best approach, mirroring the position of that country's leader, Kim Jong Un.

"How can you convince him to give up all the nuclear weapons without any hope that the U.S. would be following a more friendly policy towards him?" Cui asked. 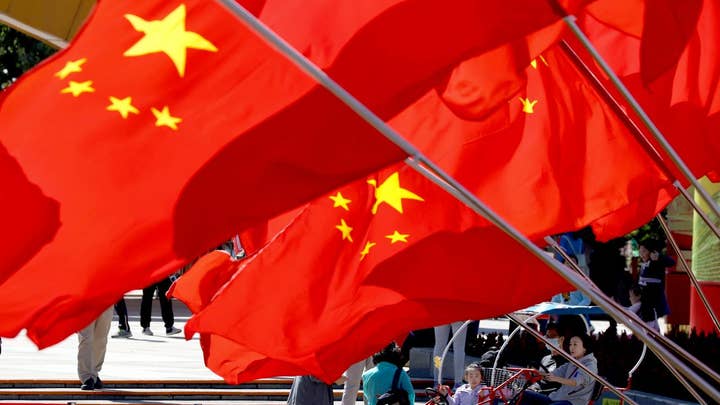 Secretary of State Mike Pompeo was in Beijing last week, where top Chinese officials vowed to take "all necessary measures" to safeguard their country. They have since said that high-level communications continue between the two countries.

Still, there were signs tensions between China and the U.S. have eased somewhat in recent days. Global stock market indexes bounced back sharply Friday after their recent plunges, on word of the possible presidential meeting.

And reports have emerged that Mnuchin has advised against labeling China a currency manipulator — a status that could trigger penalties. The Chinese currency has been falling in value against the dollar in recent months, raising concerns that Beijing is devaluing its currency to make Chinese goods more competitive against U.S. products.

Mnuchin did not say this weekend what the forthcoming Treasury report, set to come out next week, will conclude about China's currency practices. In the past, Treasury has placed China on a watch-list but found that Beijing did not meet the threshold to be labeled a currency manipulator.

The Treasury secretary met Thursday with Yi Gang, head of China's central bank. "I expressed my concerns about the weakness of the currency." Mnuchin said.

Cui told Wallace that China, despite its ongoing spat with the U.S. on a variety of fronts, remains optimistic about November's planned meeting between Trump and Jinping. Kudlow, the chief White House economic adviser, said on "Fox News Sunday" that the one-on-one between the two leaders will "probably" happen.

"There’s a good mutual understanding and good working relationship between the two," Cui said. "I hope and I’m sure this will continue."