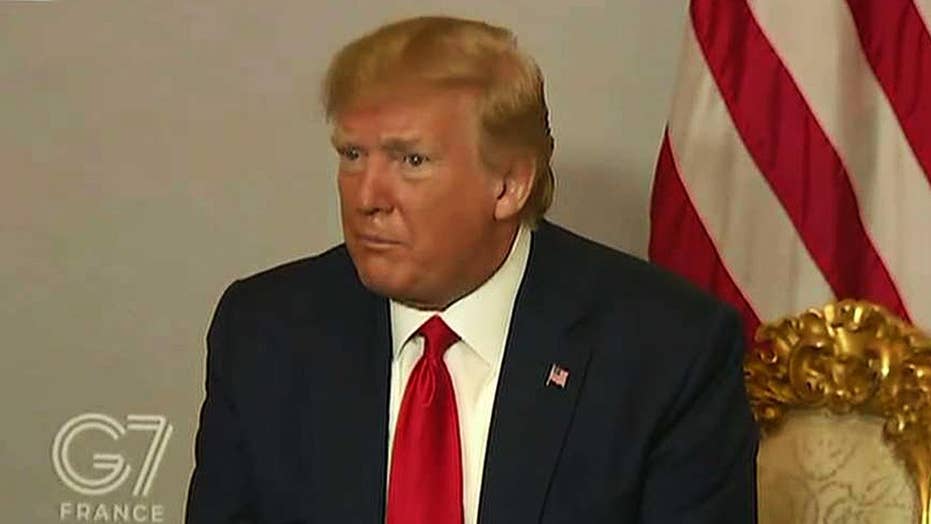 Trump: 'I think were going to have a deal'; China ready to negotiate after markets tank

Asia analyst Gordon Chang weighs in on the contents of Trump's new trade deal with Japan and its potential impact on U.S.-China relations.

China signaled Monday it is now seeking a "calm" end to its ongoing trade war with the U.S. and President Trump voiced optimism about a deal, as Asian markets crumbled and China's currency plummeted to an 11-year low following the latest tariffs on $550 billion in Chinese goods announced last Friday by the Trump administration.

"I think we're going to have a deal," Trump told reporters.

Trump said Monday that officials from China called U.S. officials and expressed interest to "get back to the table,” The Wall Street Journal reported. He called the discussions a “very positive development.”

“They want to make a deal. That’s a great thing,” he said.

News of the possible opening in negotiations came shortly after Trump threatened to declare a national emergency that would result in American businesses freezing their relationships with China. Trump's tariff barrage on Friday was a response to China imposing its own retaliatory tariffs on $75 billion in U.S. goods.

At the Group of Seven summit in France on Sunday, White House officials rejected suggestions the president was wavering and insisted that his only regret was not implementing even more tariffs on China. Trump wrote on Twitter that world leaders at the G-7 were "laughing" at all the inaccurate media coverage of the gathering.

In response, Chinese Vice Premier Liu He told a state-controlled newspaper on Monday that "China is willing to resolve its trade dispute with the United States through calm negotiations and resolutely opposes the escalation of the conflict," Reuters first reported, citing a transcript of his remarks provided by the Chinese government. Liu is China's top trade negotiator.

Speaking at a technology conference in China, Liu added: “We believe that the escalation of the trade war is not beneficial for China, the United States, nor to the interests of the people of the world."

“We welcome enterprises from all over the world, including the United States, to invest and operate in China,” Liu said. “We will continue to create a good investment environment, protect intellectual property rights, promote the development of smart intelligent industries with our market open, resolutely oppose technological blockades and protectionism, and strive to protect the completeness of the supply chain.”

The yuan also slipped to 7.1487 to the dollar, weeks after the Treasury Department formally designated China a currency manipulator. The Treasury Department said it will work with the International Monetary Fund to try to rectify the “unfair competitive advantage created by China’s latest actions.”

"The gloves are coming off on both sides and as such yuan depreciation is an obvious cushion against US tariffs," Mitul Kotecha, an economist at Toronto-Dominion Bank, told Bloomberg News.

There are several reasons why China's central bank would want to allow the yuan to drop, including to help struggling local exporters who want their products to be less expensive for international purchasers. People’s Bank of China Governor Yi Gang, however, has insisted China does not "engage in competitive devaluation."

On Sunday, Treasury Secretary Steven Mnuchin told reporters that if "China would agree to a fair and balanced relationship, we would sign that deal in a second."

"Nobody understands where the president is coming from," he said, adding that the best thing Trump can do for market stability is to "keep quiet."

"The problem that we're faced right now is that we are making a lot of assumptions ahead of the economic realities."

The market is now dominated by fears of a portending U.S. recession, although the American economy is actually holding up, and much of the U.S. economy is made up of consumption, Innes said. If interest rates come down, he added, consumer spending is likely to go up, working as a buffer for the economy.

"What the market's really waiting for is for them to drop interest rates," Innes said. "Right now, we are still sitting on that uncertainty."

Meanwhile, Sen. Lindsey Graham, R-S.C., said on Sunday that Democrats should not criticize Trump for taking on China over trade as they have complained for years about Beijing’s policies but done nothing. Senate Minority Leader Chuck Schumer, D-N.Y,  for example, has urged Trump to fight China aggressively.

“Every Democrat and every Republican of note has said China cheats,” Graham said on CBS News’ “Face the Nation.” “The Democrats for years have been claiming that China should be stood up to, now Trump is and we’ve just got to accept the pain that comes with standing up to China.”

U.S. markets have also taken something of a beating. The Dow Jones Industrial Average plunged more than 600 points Friday after the latest escalation in the trade war between the U.S. and China rattled investors. The broad sell-off sent the S&P 500 to its fourth straight weekly loss.

The tumbling began after Trump responded angrily on Twitter following China's announcement of new tariffs on $75 billion in U.S. goods. In one of his tweets he "hereby ordered" U.S. companies with operations in China to consider moving them to other countries — including the U.S.

PUZDER: HERE'S HOW TRUMP'S FULL-COURT PRESS ON CHINA IS WORKING

Trump also said he'd respond directly to the tariffs — and after the market closed he delivered, announcing that the U.S. would increase existing tariffs on $250 billion in Chinese goods to 30 percent from 25 percent, and that new tariffs on another $300 billion of imports would be 15 percent instead of 10 percent. 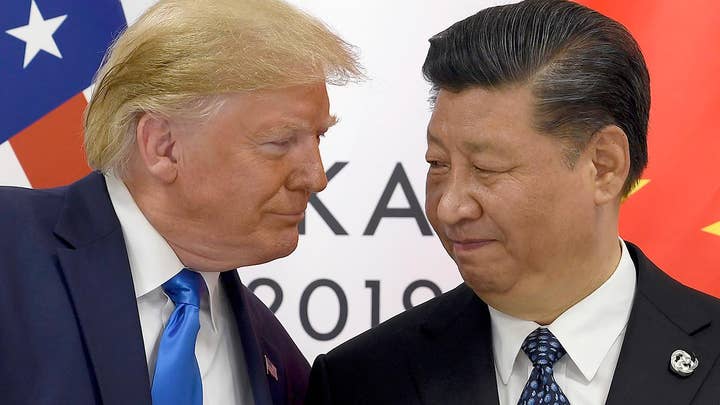 Zhu Huani of Mizuho Bank in Singapore said what he called Trump's "tariff tantrum" was setting off "the sense that tariffs could continue to rise," with the "the unpredictability of timing and extent of these trade actions risk accentuating the paralysis of business decisions and big-ticket business spending."

"No matter which way you cut the cake, it is nearly impossible to construct a bullish, or even neutral scenario for equity markets today," said Jeffrey Halley, senior market analyst at Oanda.

Trump also said Friday morning that he was "ordering" UPS, Federal Express and Amazon to block any deliveries from China of the powerful opioid drug fentanyl. The stocks of all three companies fell as traders tried to assess the possible implications.

The president has also raged against Federal Reserve chairman Jerome Powell for his continued refusal to cut interest rates, at one point saying: "My only question is, who is our bigger enemy, Jay Powel (sic) or [China's] Chairman Xi [Jinping]?"

That outburst came after Powell, speaking to central bankers in Jackson Hole, Wyo., gave vague assurances that the Fed "will act as appropriate" to sustain the nation's economic expansion. While the phrasing was widely seen as meaning interest rate cuts, he offered no hint of whether or how many reductions might be coming the rest of the year.

Some analysts, however, are confident the Federal Reserve will lower interest rates this year.

A quarter-point rate cut reduction in September is considered all but certain.