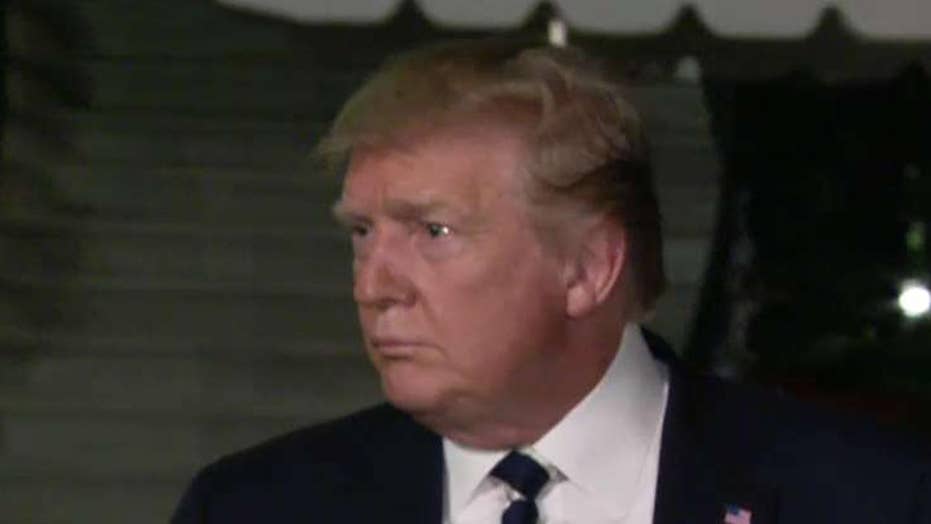 Trump addresses reporters as he departs the White House for G7 summit in France.

No one, including President Donald Trump, wants a trade war with China. Nonetheless, Americans should line up in support of his decision Friday to increase U.S. counter-tariffs on Chinese imports in response to China raising its tariffs on U.S. goods and that country's continuing refusal to abide by the norms of international trade and business practices.

If our ongoing trade woes with China have revealed anything, it’s just how convoluted and corrupt our relationship with the People’s Republic has been for decades – and how badly we need to follow through on Trump’s counter-tariff strategy to give our government the most effective leverage.

The China of 1989 is almost unrecognizable to an observer today. Thirty years ago the overwhelmingly poor and rural totalitarian state had only just embarked on the economic liberalization that would eventually make it America’s rival for world dominance.

Some things, however, have not changed. In 1989 the Chinese government was faced with months of mass protests in Beijing’s Tiananmen Square in support of political freedoms. Today the democratic and capitalist enclave of Hong Kong (a former British colony) is boiling with the same spirit of resistance to the threat of communist repression.

The Communist Party responded in 1989 with one of the most horrific mass murders in modern history. At least 10,000 people were killed by Chinese soldiers and tanks, according to a British government source.

But instead of turning our backs on the brutal regime, the West – especially the United States – deepened economic links with Beijing.

Over the next 30 years, American corporations entered into agreements with China’s state-owned industries to build everything under the sun in Chinese factories with low-paid workers. In that time, our imports from China have grown more than 40 times higher than they were in the days of Tiananmen.

Inflicting pain on China’s economy is the only way to convince its leaders that they must end the abusive trade practices that have illegitimately enriched that country – and empowered its totalitarian government - for decades.

As a result of this dramatic increase in Chinese imports, our economy has become unacceptably – if not dangerously – reliant on Chinese manufacturing expertise and facilities.

Just as we did after Tiananmen, we let China get away with it, time and time again, until Trump finally put his foot down. His aggressive trade policies and strategic counter-tariffs have revealed a basic truth that previous American leaders either failed to acknowledge or use to our advantage: China needs us more than we need China.

All it took to make American companies realize the raw deal they and our country were getting was a series of strategic tariffs that still haven’t exceeded 30 percent. If you don’t think those tariffs are effective, just look at how Beijing reacted over the past week. China is hurting and it’s more than simply lost sales and a stalling economy.

Companies, including some of the largest American retailers, are starting to flee China in droves. HP, Dell, Microsoft, Amazon and other American electronics giants are shifting production out of China. Even the crown jewel of American production in China, Apple, is reportedly looking for a better place to make its iPhones.

The pressure Trump has imposed on China is working. Chinese manufacturing companies are reportedly getting “desperate” as the communist country experiences its first real economic pain in decades. Meanwhile, the American economy and jobs market remain strong. When Trump announced on Twitter that he was “ordering” companies to “start looking for an alternative to China,” he was encouraging a process that had already begun on the ground.

The president also tweeted: “In the spirit of achieving Fair Trade, we must balance this ... very unfair Trading Relationship.”

Of course we must.

The last time the Chinese regime cracked down violently on dissidents, we did nothing but reward China with economic engagement. China responded by taking advantage of our cooperative nature.

This time, as the Communist Party appears ready to resort to violent repression once again in Hong Kong, we should recognize that Beijing only responds to strength and toughness. Inflicting pain on China’s economy is the only way to convince its leaders that they must end the abusive trade practices that have illegitimately enriched that country – and empowered its totalitarian government – for decades.

Starting 30 years ago, the U.S.-China relationship went from bad to worse, even toxic. That the standoff continues shows how much is at stake. Thankfully, Trump has demonstrated the fortitude to stay the course until this relationship is fixed – for good.