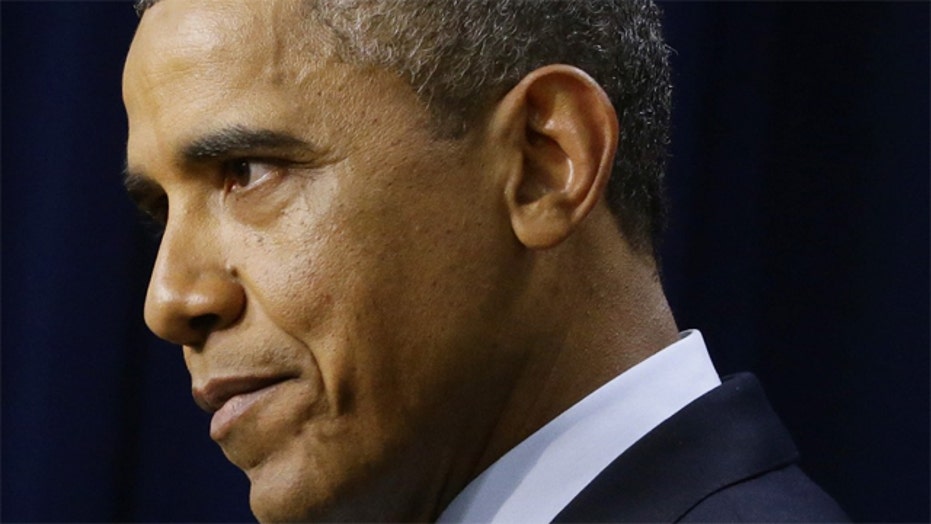 President Obama, speaking to a crowd of House Democrats at a party retreat in Maryland, touted his executive order powers on Friday – repeating a theme he’s hit regularly since his State of the Union address.

While saying he’s willing to work with Congress, he added, “I'm not going to wait, because there's too much to do. And America does not believe in standing still.”

The rhetoric, though, is quite a turnaround from his days on the 2008 campaign trail, when he bashed his predecessor for going it alone.

“The biggest problems that we're facing right now have to do with George Bush trying to bring more and more power into the Executive Branch and not go through Congress at all, and that's what I intend to reverse when I'm president of the United States of America,” Obama said on March 31, 2008, in Lancaster, Pa.

But after five years in office, and facing Republican resistance in both chambers of Congress, Obama has come around to what he calls a “pen and phone” strategy to get things done.

At the Democratic retreat on Friday, both Obama and Vice President Joe Biden tried to rally lawmakers, many of whom are facing tough reelections in the fall.

Although the president was sending a message of teamwork to Democrats, he was, ironically, also backing a go-it-alone approach.

One of his latest executive actions was to raise the minimum wage for federal contract workers.On top of that, the administration has unilaterally delayed parts of the president’s signature health care law 29 times.

That has led Republican Sen. John Barrasso of Wyoming to charge, “It's almost whatever he thinks it is on any given day when he wakes up.”

The health care actions have dealt with everything from delaying Medicaid reimbursement rates for primary care physicians to delaying enforcement of the so-called employer mandate for certain businesses.

On Friday, White House Press Secretary Jay Carney was asked about the previous comments Obama made about Bush’s use of executive actions. He said they were specific to the War on Terror.

“There is no question that this president has been judicious in his use of executive action, executive orders, and I think those numbers thus far have come in below what President George W. Bush and President Bill Clinton did,” he said.

Carney added, “The matter the president was discussing in his campaign in 2008 wasn't the number. It was the quality and the type of executive actions that he believed were not appropriate.”

That leaves some Republicans saying he’s just doing what he wants to promote his own agenda.

“It's one of the reasons why there's so little trust of the White House, as they're going way beyond the original intent of lots of legislation, and they change it and interpret it to their own whims,” Barrasso said.

Carney dismissed the criticism, saying: “It is funny to hear Republicans get upset about the suggestion the president might use legally available authorities to advance an agenda that expands opportunity and rewards hard work and responsibility, when, obviously, they supported a president who used executive authorities quite widely.”