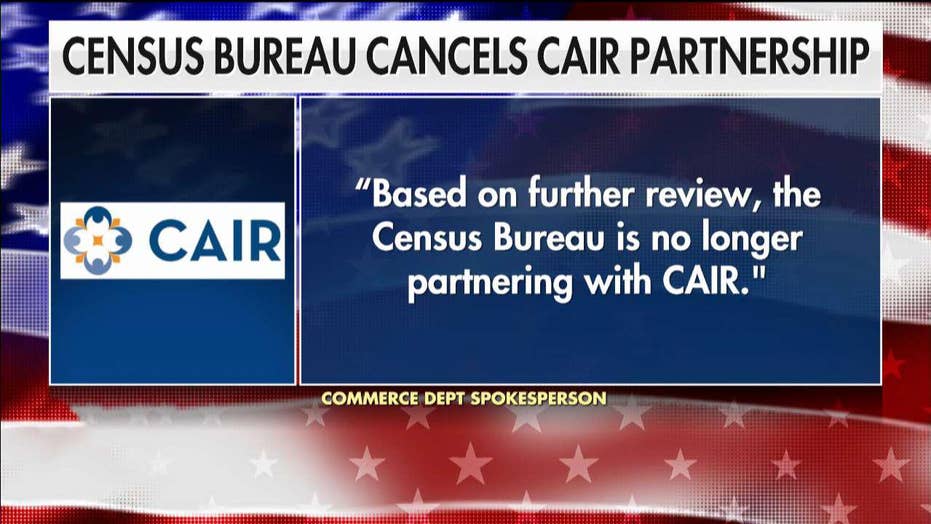 US Census Bureau cancels partnership with Council on American-Islamic Relations

Commerce Dept. spokesperson says a partnership with CAIR is being terminated.

EXCLUSIVE: The Commerce Department on Thursday terminated its just-announced planned partnership with the nation's largest Muslim advocacy group, the Council on American-Islamic Relations, after Fox News' "Tucker Carlson Tonight" asked about the arrangement -- given CAIR's reported ties to the terrorist group Hamas, and its repeated attacks on the president.

"Based on further review, the Census Bureau is no longer partnering with CAIR," the Commerce Department said in a statement to "Tucker."

The plan, according to the group, was to enhance outreach efforts to Muslims using CAIR's network of local offices. The census, conducted once a decade, has been used not only to determine congressional apportionment, but also as a critical planning tool for state, local and federal agencies.

"The Census Bureau, like CAIR, is nonpartisan," the organization said. "CAIR is not receiving any government funding as part of this project to promote Muslim participation in the U.S. census. We continue to believe that President Trump and his administration promote a white supremacist, anti-immigrant and Islamophobic agenda."

In its official statement on Wednesday announcing the partnership, however, CAIR sounded a more positive note. 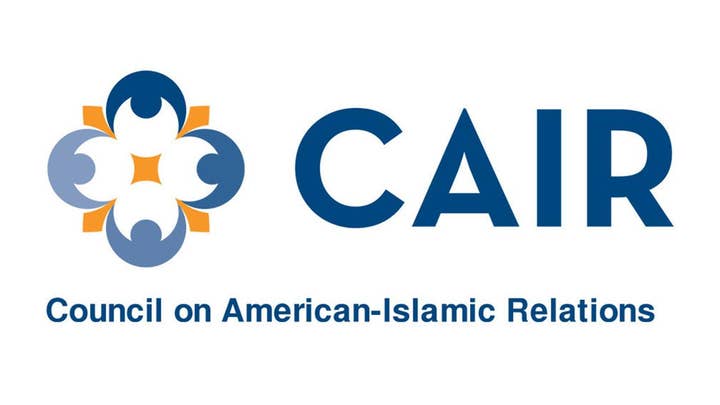 "CAIR is proud to partner with the U.S. Census Bureau to ensure American Muslims are fairly and accurately counted in the 2020 Census," Nihad Awad, CAIR’s national executive director, said in a news release earlier on Thursday. "Full participation in the census ensures that American Muslims will be better represented in Congress and that their communities receive an equal share in state and federal programs."

The organization added: "CAIR wants to ensure that not only are American Muslim communities being fairly counted, but that their neighbors are getting a fair share in federal and state funding."

In 2009, the FBI severed its once-close ties to CAIR amid mounting evidence that the group had links to a support network for Hamas.

Local chapters of CAIR were shunned in the wake of a 15-year FBI investigation that culminated in the conviction of Hamas fundraisers at a trial in which CAIR itself was listed as an unindicted co-conspirator.

The U.S. government has designated Hamas as a terrorist organization.

Roula Allouch, the board chairwoman of the Council on American-Islamic Relations, left, seen speaking in 2016. (AP Photo/John Minchillo, File)

The FBI previously had invited CAIR to give training sessions for agents and used it as a liaison with the American Muslim community.

CAIR's executive director, Nihad Awad, attended a post-Sept. 11 meeting with then-FBI Director Robert Mueller, and he met with other top brass as recently as 2006. That was before Awad was shown to have participated in planning meetings with the Holy Land Foundation, five officials of which were convicted in December of funneling $12.4 million to Hamas.

Prosecutors identified CAIR's chairman emeritus, Omar Ahmad, as an unindicted co-conspirator in that trial, and Special Agent Lara Burns testified that CAIR was a front group for radical organizations operating in the U.S.

CAIR denied it conspired in the case and has sued unsuccessfully to have its name removed from the list of co-conspirators. It also has protested the FBI's decision to sever relations.

"This is an unfortunate legacy of the Bush administration's misguided and counterproductive efforts to marginalize mainstream American Muslim organizations," CAIR's national office said in a statement to Fox News at the time. "It is not surprising that we would be singled out by those in the previous administration who sought to prevent us from defending the civil rights of American Muslims."

In a statement on its website in May 2013, CAIR similarly rejected suggestions it had links to terrorism.

"CAIR is not is [sic] 'the Wahhabi lobby,' a 'front group for Hamas,' a 'fundraising arm for Hezbollah,' '...part of a wider conspiracy overseen by the Muslim Brotherhood...' or any of the other false and misleading associations our detractors seek to smear us with," the organization said. "That we stand accused of being both a 'fundraising arm of Hezbollah' and the 'Wahhabi lobby' is a significant point in demonstrating that our detractors are hurling slander, not fact. Hezbollah and the Salafi (Wahhabi) movement represent diametrically opposed ideologies."