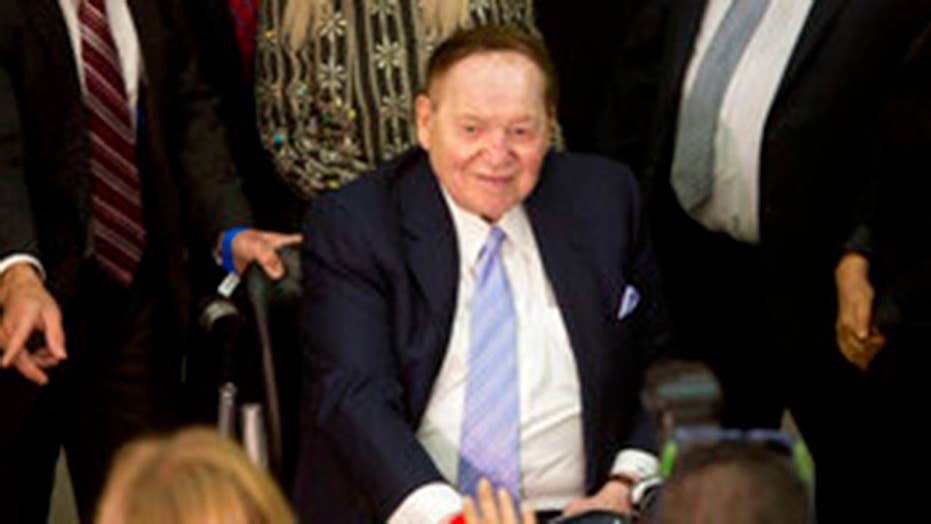 Billionaire Sheldon Adelson is making a big donation to a super PAC that is pushing to protect the Republicans' House majority. FBN’s Charlie Gasparino with more.

Las Vegas casino magnate Sheldon Adelson has committed to a $30 million cash infusion for a House Republican group, a move that will boost GOP chances of fighting off energized Democrats in the midterm elections.

The donation to the House GOP-aligned Congressional Leadership Fund was sealed last week when Speaker Paul Ryan and his entourage met with the mogul at his hotel, where he explained the importance of his money in maintaining the Republicans' House control, Politico reported.

Due to laws guiding political contributions, Ryan, like any other federally elected official, couldn't solicit a donation as big as $30 million. Instead, Norm Coleman, the former Minnesota senator who chairs the Republican Jewish Coalition, was tasked with asking for the donation while Ryan left the room, the report said.

Republicans have long courted Adelson to make a donation in this election cycle. In February, multiple House Republicans paid Adelson their respects and attended an annual retreat hosted by the Republican Jewish Coalition, which Adelson also supports.

The massive cash infusion comes six months before the midterm elections, in which Republicans are facing tough and well-funded Democratic challengers with a mobilized voting base in the wake of President Donald Trump's presidency.

House Minority Leader Nancy Pelosi said earlier this month that she's optimistic her party will regain control of the House.

According to an average of generic ballot polls, Democrats have a 7-point advantage over the GOP, though the lead has been significantly cut in recent months, with fears on the Democratic side as well that the so-called "blue wave" won't materialize on Election Day.

Adelson's donation is also three times bigger compared to his 2016 donation and came a lot earlier than in the previous election cycles, according to Politico.