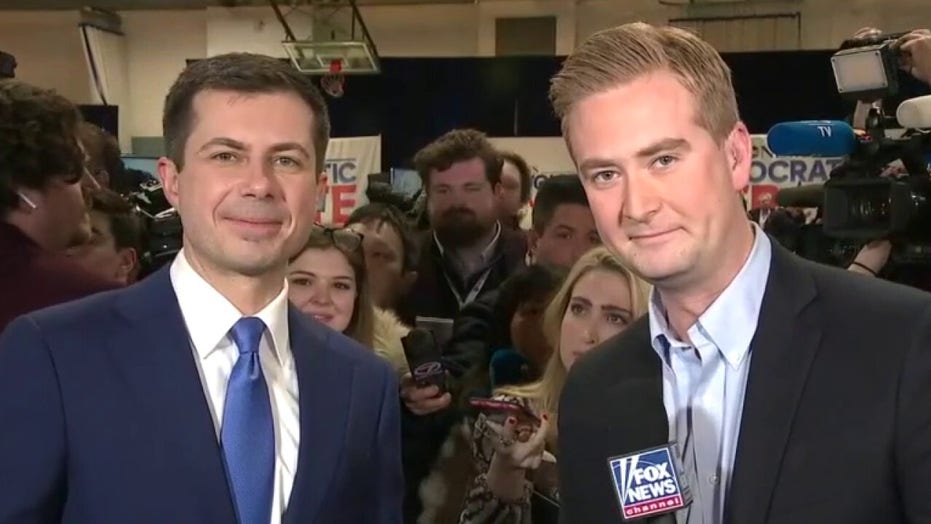 After claiming victory in Iowa and shocking the political world by essentially tying Democratic presidential nomination rival Sen. Bernie Sanders of Vermont in the caucuses even before the delayed results started trickling out, the former mayor of South Bend, Ind., says he’s aiming to go two-for-two in the state that holds the first primary in the White House race.

BUTTIGIEG ON THE RISE IN LATEST NEW HAMPSHIRE POLLS

And if he does, the youngest candidate in the Democratic field who, if elected, would become the nation’s first openly gay president,  would upend the nomination race and raise serious doubts about former Vice President Joe Biden’s ability to bounce back from two early setbacks.

While who actually won in Iowa is still in dispute -- both Buttigieg and Sanders are claiming victory -- an emboldened Buttigieg told Fox News’ Pete Doocy after Friday night’s Democratic presidential nomination debate that “we’re definitely in it to win it in New Hampshire.”

Buttigieg’s a close second to Sanders in two of the three latest polls of likely Democratic presidential primary voters in the Granite State: a University of New Hampshire survey for CNN that was released Saturday afternoon and an NBC News/Marist survey released Friday evening. And Buttigieg edged past Sanders on Friday night in a daily tracking poll by Suffolk University for the Boston Globe and WBZ-TV.

Senior Sanders adviser Jeff Weaver downplayed the Buttigieg rise in the polls, telling Fox News: “He keeps moving up because he overperformed in Iowa. We won there, but everybody thought we were going to win there, so you don’t get the same kind of bump. This is typical 48 hours after the thing, you get a bump. The question is can you sustain until the next election. That’s what we’ll see on Tuesday. I think not.”

The candidate -- who at 38 is the youngest contender in the field of Democratic White House hopefuls -- soared in the autumn but had seen his poll numbers -- and his fundraising -- slip a bit over the past two months.

But his strong finish in Iowa’s changed all that. Buttigieg’s campaign announced on Friday night that it raised $4 million in fundraising in the four days following the caucuses -- with some of that cash haul coming from 30,000 donors new to the campaign.

And his team in New Hampshire -- one of the more formidable 2020 organizations in the state -- is working to make sure Buttigieg’s polling and fundraising momentum translates into the candidate’s supporters actually making it to polling stations on Tuesday.

The campaign has 75 staffers in New Hampshire -- spread out among 15 offices across the state. And they’re touting their army of volunteers on this final weekend before the primary. The campaign told Fox News that on Saturday morning’s door knock shift, they sent out 25 percent more volunteers than on their previous best day in New Hampshire.

Separate from his ground game, Buttigieg’s getting a helping hand when it comes to the air wars.

The campaign is spending a modest $240,000 to run ads during the final week leading up to the primary, according to figures a few days ago from the ad-tracking firm Advertising Analytics.

But Buttigieg’s benefiting from the efforts of Vote Vets, a pro-Democratic outside group that’s spent over $1 million in the first-in-the-nation primary state of New Hampshire to run ads supporting the Afghanistan War veteran.

Buttigieg went into Friday night’s prime-time debate as the candidate with the most momentum – and he faced plenty of incoming fire from his rivals on the stage.

Buttigieg came under attack for being too green for the White House, for being dismissive of Washington experience, and for being beholden to big money interests. But nothing happened during the marathon two and a half hour showdown to apparently soften his movement.

Still, one of the harshest lines of questioning did not come from a candidate, but from ABC debate moderator Linsey Davis, who challenged Buttigieg on his record in South Bend, especially over arrests for marijuana possession during his tenure as mayor.

Primary veteran Neil Levesque, the executive director of the New Hampshire Institute of Politics, highlighted that “we’ve seen all through the fall and into the winter here in New Hampshire, there’s something that he is saying and the way that he is saying it that’s very attractive to voters and so it might hold as we go into Tuesday and he’s certainly gaining some momentum.”

Lucas Meyer -- president of the increasingly influential New Hampshire Young Democrats – explained that “there may be a peak in interest in him based off his performance in Iowa, but in part because he’s new to the state. I think there probably is a bit of an appeal in his freshness to the state.”

But he asked “whether that holds into the weekend and through primary day is anybody’s guess. A strong showing in Iowa definitely helps maintain that.”

His co-victory Iowa exceeded expectations. But now expectations are heightened because of his Iowa showing.

Top aids to another rival – former Vice President Joe Biden – told reporters on Friday that Buttigieg should have an advantage in New Hampshire because of the state’s overwhelmingly white electorate. Buttigieg’s struggles to resonate with African American and Latino voters has been well documented in the media.

With the White House race moving next to Nevada and South Carolina – which have much more diverse electorates – a strong finish in New Hampshire is paramount for Buttigieg.

Veteran New Hampshire Democratic consultant Sean Downey – who was a senior adviser on Sen. Cory Booker of New Jersey’s presidential campaign, emphasized that “Mayor Pete’s situation here is urgent given his real lack of traction in the south and out west.”