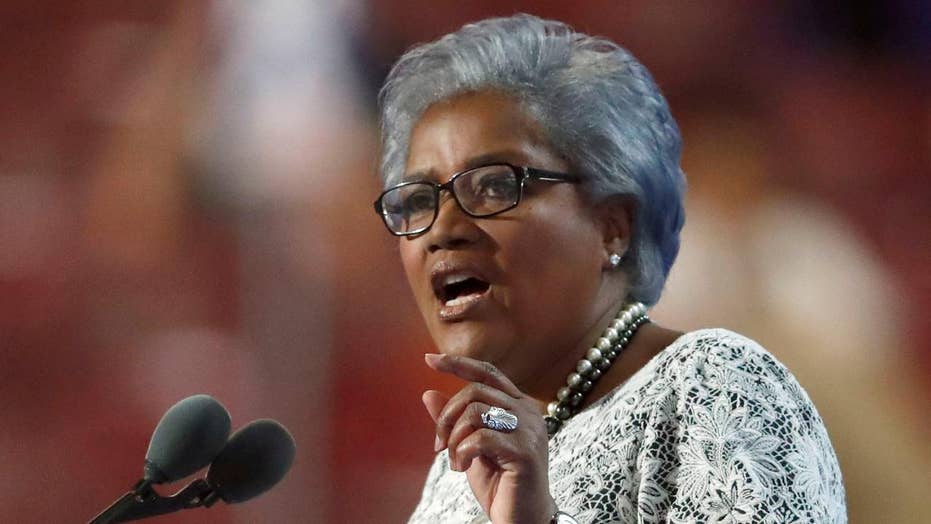 Exposed: The lies journalists tell in the Brazile scandal

'The Intercept's' Glenn Greenwald highlights the lies journalists are telling on Twitter while covering the Donna Brazile-DNC-Clinton controversy. #Tucker

Donna Brazile's newly released 2016 campaign tell-all accuses the FBI and the Democratic National Committee she used to lead of a bungled response to the email hacks that threw the party into turmoil last summer.

In “Hacks,” Brazile writes that she only learned of the breach in early June 2016 when then-DNC Chairwoman Rep. Debbie Wasserman Schultz informed her and other party officials that The Washington Post was set to publish a story on the matter.

“On June 14, Debbie invited the Democratic Party officers to a conference call to alert us that a story about hacking the DNC that would be published in the Washington Post the following day,” Brazile writes. “That call was the first time we’d heard that there was a problem.”

About five weeks later, at the start of the Democratic National Convention, WikiLeaks released more than 19,000 emails, including ones that suggested Wasserman Schultz had helped Clinton win the nomination over rivals Bernie Sanders and others. The revelations ultimately led to Wasserman Schultz, of Florida, stepping down and Brazile becoming interim DNC chairwoman.

But the Brazile book laments "incompetence on both sides" that allegedly allowed the hacking problem to fester for months before top officials were made aware.

She says the FBI, after learning of the problem, only contacted the DNC IT department. The IT contractor on the other end went looking for a compromised computer, didn't find anything, and "let it go," she writes.

Donna Brazile, right, took over for Debbie Wasserman Schultz at the DNC amid the scandal over hacked emails in the summer of 2016. (AP)

Brazile says this back-and-forth went on for weeks before the FBI provided additional details and the technician alerted a superior. Even then, it took seven months for Wasserman Schultz to be alerted.

"By the time Debbie finally found out about the hack, the Russians had been in the system for almost a year without anyone noticing," Brazile writes, questioning why the FBI didn't go directly to the DNC boss and why the IT contractor didn't go straight to a superior. The FBI did not immediately respond to a request for comment from Fox News.

The book also revives allegations that the DNC was not very responsive to the Obama administration's warnings.

Brazile writes that a reporter had told her the FBI had been “calling and calling” the DNC about Russia possibly having hacked into the group’s electronic systems “but never got anyone to respond.”

Brazile asked aloud why agents didn’t directly call Wasserman Schultz, considering she was a member of Congress. She also writes that Eric Holder, the U.S. attorney general at the time, stopped her at then-President Obama’s birthday party in August 2016 to say that the DNC “was not very responsive” to the FBI inquires.

“And here I was thinking that he was asking me to dance,”  Brazile writes. She says then-national security adviser Susan Rice also warned her "it took a long time" for the FBI to get a response from the DNC.

While the book hit the shelves on Tuesday, excerpts from the bombshell tell-all have been sending shockwaves through the Democratic Party since last week.

Among her allegations is that a 2015 joint-fundraising agreement between the DNC and the Clinton camp gave the campaign unprecedented authority over DNC hiring and spending, in exchange for more than $1 million to the cash-strapped group. She suggested this hurt Bernie Sanders and other candidates in the primary, though has since said the primary itself wasn't rigged.

Former campaign officials have denied the allegations and point out the agreement was presumably meant for after Clinton became the party’s nominee and that such a deal was available to other candidates.

As for the hack, Brazile writes that her first clue emerged in early June, right before the conference call, when her cell phone “started acting like it was possessed.”

She says the phone kept requesting her password. So she eventually called the DNC help-line and spoke to a technician who she said “expressed no alarm” but still advised her to “immediately” delete her DNC email account from all of her electronic devices.

“We knew there was more coming. We just didn’t know when,” Brazile writes later in the 257-page book. “Julian Assange, the founder of WikiLeaks, had warned that the batches of documents about the Democrats would be released all the way up to Election Day.”

Another sign that the email dump was timed to thwart Clinton’s presidential bid was a tweet in August by Republican operative Roger Stone foreshadowing dirt on Clinton campaign Chairman John Podesta, according to the book.

“That sleazy, leering, white-haired Nixon operative who was a big supporter of Donald Trump tweeted that soon it would be 'Podesta’s time in the barrel.' … We didn’t know when the hammer would fall, but we were as ready as we could be,” Brazile writes.