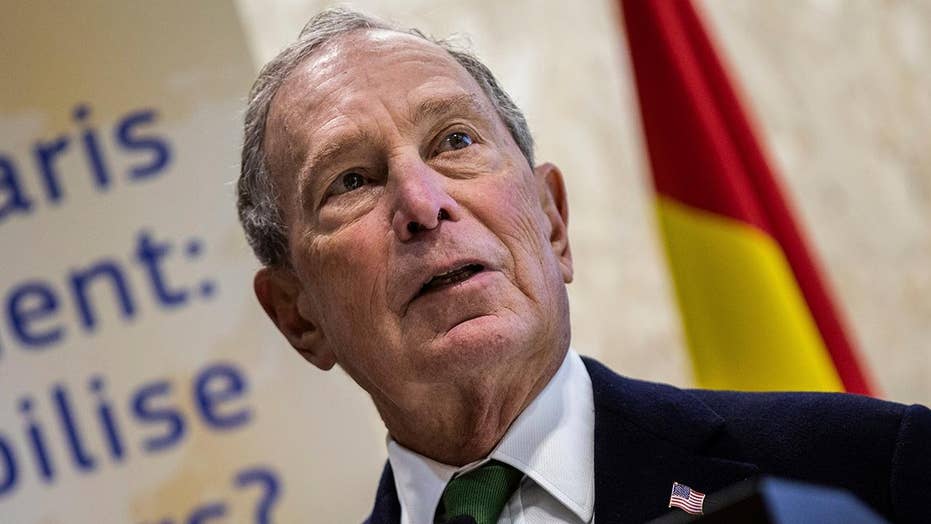 Democratic presidential candidate Mike Bloomberg is calling for a 50 percent reduction in carbon emissions over the next 10 years to battle climate change.

To achieve that goal, the former New York City mayor and multi-billionaire business and media mogul on Friday unveiled a plan that would shutter all 251 remaining coal plants across the country by 2030 and replace them all with clean energy. He would also phase out gas-fired power plants.

At a speech in Alexandria, Va., Bloomberg warned that "we have to start working as hard as we can building a 100 percent clean energy economy because the alternative is just too bad for all of us."

Standing at a podium with an ‘END COAL 2030’ campaign banner, he highlighted his goals – ensuring 80 percent clean electricity by the end of his second term in the White House, and moving the country toward 100 percent clean energy by 2045 or 2050.

Among the first steps Bloomberg says he’ll take if he’s elected president would be ending all subsidies for fossil fuels, implementing stringent carbon and health pollutant standards for new gas plants, and putting a halt to construction of a new generation of fossil-fuel power plants.

Bloomberg also pledges to prioritize communities that have suffered most from coal pollution or have been left behind in the transition to clean energy.

In announcing his plan, Bloomberg is taking aim at President Trump, criticizing the GOP incumbent for a lack of commitment to tackling climate change.

“The president refuses to lead on climate change, so the rest of us must. I’ve been all-in on this fight for more than a decade - and having helped close more than half the nation's dirty coal plants, having cut New York City's carbon footprint by 14 percent, having led a coalition of cities, states, and businesses committed to the Paris Agreement, I know that we can win,” Bloomberg said.

Trump vowed to save the coal industry as he campaigned for president in the 2016 election. The president’s had mixed success in the White House in following through on his pledge.

Bloomberg also said he would "quadruple our investment in research and development across multiple federal agencies to work with the private sector to unlock more private capital for clean energy investment and work on sustainable development. And we also have to end the war on science that the Trump Administration is waging."

Asked by Fox News about the price tag for his proposals, Bloomberg said: "I don’t know how you could possibly estimate the cost of something that is going to stretch out to 2050. No economist or mathematician is good enough to do those calculations."

Bloomberg’s poured millions of his own money to fund the effort to fight climate change.

The candidate, who’s made the issue a central pillar of his presidential campaign, spoke in person at the beginning of this week at a United Nations global climate conference in Spain, while the official U.S. delegation kept a lower profile at the gathering.

On Wednesday, Bloomberg teamed up with former Gov. Jerry Brown in California as part of the efforts of America's Pledge, a coalition of governors, mayors, leaders in the business world, and others focusing on meeting global climate goals.

Climate change has been one of the leading issues in the race for the Democratic presidential nomination. It was a top issue for Washington state Gov. Jay Inslee, who dropped his White House bid earlier this autumn. And it's a top issue for current candidate Tom Steyer, a billionaire environmental and progressive advocate and organizer.