Political commentator Ana Navarro has made the argument that 2020 Democratic hopeful Joe Biden needs to up the ante if he wants to beat President Trump in 2020.

During an appearance on CNN's "New Day", Navarro said she "really likes" Joe Biden, but doesn't see him putting in the effort matching the likes of his competition, like Sen. Kamala Harris and Mayor Pete Buttigieg.

Her comments came in light of Biden missing a crucial campaign event for the second week in a row, after skipping the Iowa Democratic Party's annual summer fundraiser on Sunday and the California Democratic Party convention last week in San Francisco.

“Biden’s best day was his campaign launch," she said. "I say this as somebody who really likes Joe Biden and would be happy – skip and hop to the polls – if I could vote for him in the general instead of Donald Trump.

BIDEN MOCKED BY DEMS FOR LIGHT TRAVEL SCHEDULE, OBAMA NAME-DROPPING: 'THIS IS A JOKE, RIGHT?' 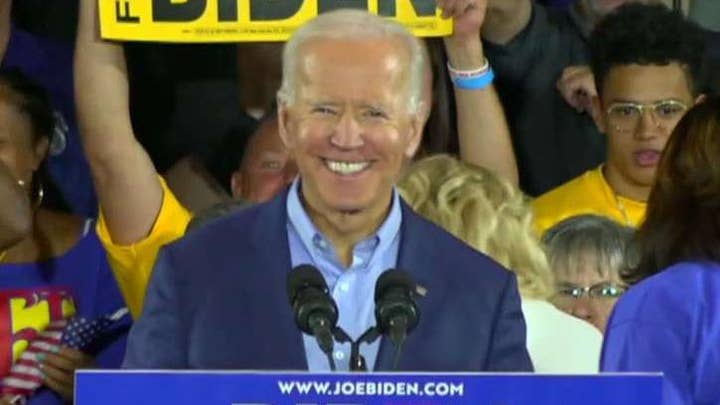 "But right now, he’s giving me Jeb Bush acid reflux. I want to see him pull this together,” she continued.

Based off of Biden's name recognition and his previous experience as former President Barack Obama's VP, it appears that Biden is attempting to rest on those characteristics instead of a "fire in the belly" approach seen by his Democratic colleagues, other contributors said.

A telling event will be the Iowa Democratic caucuses in 2020, where candidates will have the opportunity to lay out their platforms and debate issues in earnest. It will be crucial the ex-Veep illustrate his energy and charisma to set himself apart from others at that time, according to the political analyst.

"Joe Biden can't go out there on his crowd of Democratic love and string a harp," Navarro said.

“He's got to go out there and prove he can punch because people want to see electability and they want to see ‘Can he punch? Will he be able to punch at Donald Trump?'”