The Biden administration on Wednesday issued a 100-day "pause" on deportations of illegal immigrants -- a dramatic move that caps a slew of immigration-related moves on President Biden’s first day in office.

"The pause will allow DHS to ensure that its resources are dedicated to responding to the most pressing challenges that the United States faces, including immediate operational challenges at the southwest border in the midst of the most serious global public health crisis in a century," DHS said in a statement.

Biden had promised to implement a 100-day moratorium during the 2020 campaign, and the order from DHS fulfills that promise. It would apply to any noncitizen with a final order of removal with very limited exceptions.

It would exclude those who, according to a written finding by the head of Immigration and Customs Enforcement (ICE), has engaged in terrorism or espionage or who poses a danger to national security. It would also exclude those who were not present in the U.S. before Nov. 1 2020, those who agreed to waive the right to remain, and those who the ICE director individually determined need be removed by law.

The move, which means many illegal immigrants with criminal convictions and charges will not be deported in that timeframe, caps a slew of immigration moves by the new president, reversing many of the policies of former President Trump.

Earlier Wednesday, Biden signed an executive order that halts the construction of the wall at the southern border while the administration studies whether it can redivert money that has been assigned to additional wall mileage.

He also signed a memorandum to protect the 2012 Deferred Action for Childhood Arrivals (DACA) program, which shields immigrants brought to the country illegally as children from deportation. Trump had sought to end the program but was rebuffed by the Supreme Court.

Biden’s memorandum directs the DHS secretary to take appropriate action under the law to preserve the program.

Biden also signed an executive order putting an end to what the administration described as "the Muslim ban" -- which refers to the travel bans placed on predominantly Muslim and African countries by Trump over national security concerns. 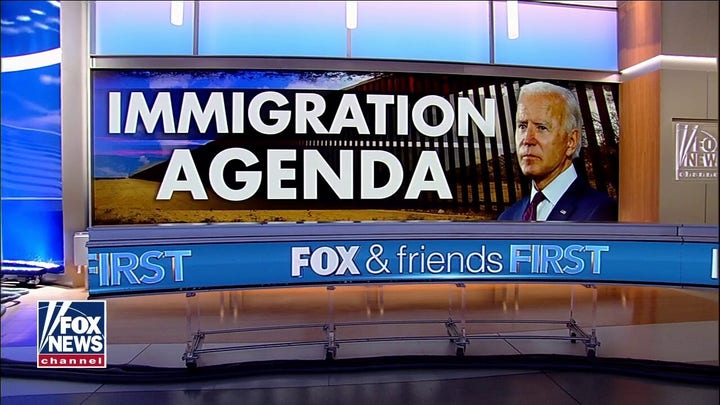 Other orders include one to revoke the Trump administration’s plan to exclude non-citizens from the census and the apportionment of congressional seats, and another to extend the Deferred Enforced Departure (DED) designation for Liberians in the country until June 2022.

Separately, Biden's transition team has this week unveiled an immigration reform proposal that would include an eight-year path to citizenship for illegal immigrants in the U.S. It would also grant immediate green cards for DACA and Temporary Protected Status (TPS) recipients.

Biden has also promised to end Trump-era policies, such as the Migrant Protection Protocols (MPP) and other asylum policies -- but officials have warned that such moves will take time.