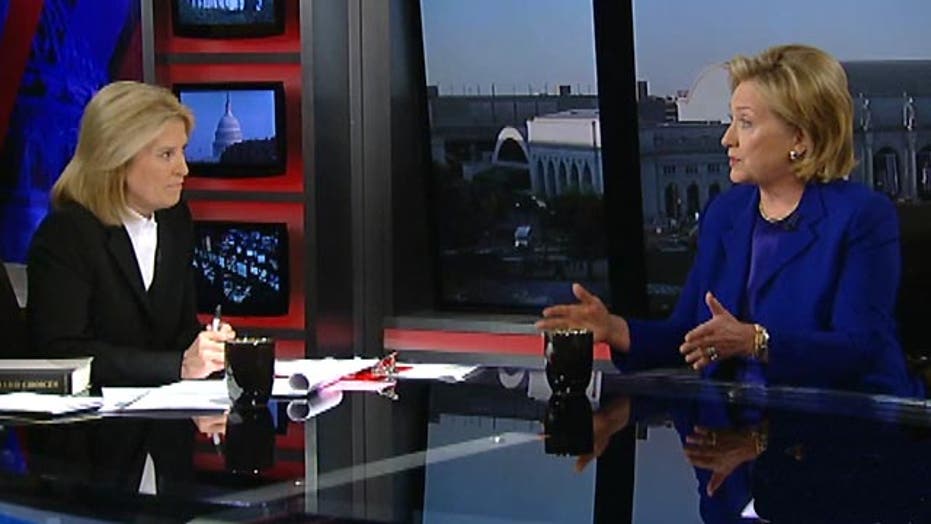 Greta: Behind the scenes - The Hillary Clinton interview

'Off the Record,' 6/17/14: My hopes and expectations from the interview with the surprisingly stressful former secretary of state and possible 2016 presidential candidate

The special House committee probing the fatal Benghazi attacks has yet to announce whether former Secretary of State Hillary Clinton will be subpoenaed to testify, but the investigation nevertheless looms like a storm cloud over her potential 2016 presidential candidacy.

Those running the committee are taking their time hiring investigators and staff. A source familiar with the committee told Fox News that public meetings and witness depositions are not expected to start until September.

The schedule, it seems, threatens to leak into the unofficial -- and increasingly early -- start of the presidential campaign season. And it could undermine the launch of any budding Clinton campaign by dragging the former secretary back before Congress for a public grilling.

Clinton already has testified on the issue before Congress, which has held at least 10 related hearings. But congressional Republicans and others continue to seek answers about what Clinton and other high-level administration officials knew about the fatal attack on four Americans, compared to what they told the public.

Payne doesn’t expect Clinton to reveal new or damaging information about her role as secretary of State during the Sept. 11, 2012, attacks on a U.S. outpost in Benghazi, Libya.

“But every day she spends on Capitol Hill talking about the tragedy is a day she’s not selling her latest book and convincing Democratic voters that she would be a great candidate in the 2016 primary,” said Payne, a vice president at D.C.-based Vox Digital.

The administration enjoyed a burst of positive news this week following the capture of Benghazi suspect Ahmed Abu Khattala. But Clinton herself says there are unanswered questions, and raised more by telling Fox News this week that she supported the administration’s initial explanation that the attacks were sparked by an anti-Islam film, despite having personal doubts.

The GOP-led Benghazi Select Committee offered no information this week on a witness list, whether Clinton would be subpoenaed or a hearing schedule.

However, a spokesperson for committee Chairman Rep. Trey Gowdy, R-S.C., said that the seven-Republican, five-Democrat committee will “talk to all material witnesses as many times as necessary to discover all relevant facts and answers.”

The GOP-led House voted last month in favor of forming the committee, in large part after the discovery on an email from White House official Ben Rhodes that said then-U.N. Ambassador Susan Rice should use TV interviews to "underscore that these protests are rooted in an Internet video, and not a broader failure of policy."

Congressional Democrats argue the formation of the committee and the possibility that Clinton will be forced to testify is an election-year stunt to hammer her and fellow Democrats running in 2014.

“The only thing I see going on with the Benghazi, so-called investigation is my Republican colleagues using this issue to raise campaign dollars,” California Rep. Xavier Becerra, chairman of the House Democratic Caucus, told C-SPAN on Sunday.

Rep. Elijah Cummings, the top Democrat on the select committee, has called the upcoming hearings a GOP-led “witch hunt” intended to damage Clinton, whom he thinks will be his party’s 2016 presidential nominee.

“It doesn't take a rocket scientist to figure this out,” he said during a recent interview on “Fine Print,” a joint ABC-Yahoo News project.

Cummings, a member of the House Committee on Oversight and Government Reform, which has held several hearings on Benghazi, nevertheless insists his role includes making sure every witness is treated fairly -- Democrat or Republican.

The Gowdy spokesperson told FoxNews.com that witnesses will be handled “in a manner consistent with fair practice and respectful of [their] other responsibilities.”

Congress has held at least 10 hearings on the circumstances surrounding the attacks that killed Ambassador Chris Stevens, as well as State Department official Sean Smith and CIA contractors Glen Doherty and Tyrone Woods. The State Department has conducted its own probe, known as the Accountability Review Board.

Clinton testified on the issue before House and Senate committees in January 2013.

Her testimony before the Senate Foreign Relations Committee is perhaps most noted for her response to questions about why the American public had to wait for several days to learn what likely sparked the fatal attacks.

“What difference at this point does it make?” Clinton said. “It is our job to figure out what happened and do everything we can to prevent it from ever happening again.”

Among the other key details regarding the committee is who will be hired or appointed as staff.

Kansas GOP Rep. Mike Pompeo, a West Point graduate on the select committee, recently told Fox News the first order of business for members is to compile a detailed timeline of the attacks.

"We still don't have all of the facts that surrounded the events of that night,” he said. “Did the Department of Defense speak to the State Department? Did the State Department have good contacts with our intelligence operations folks? Where was the White House and its National Security staff, that entire team that's responsible?"