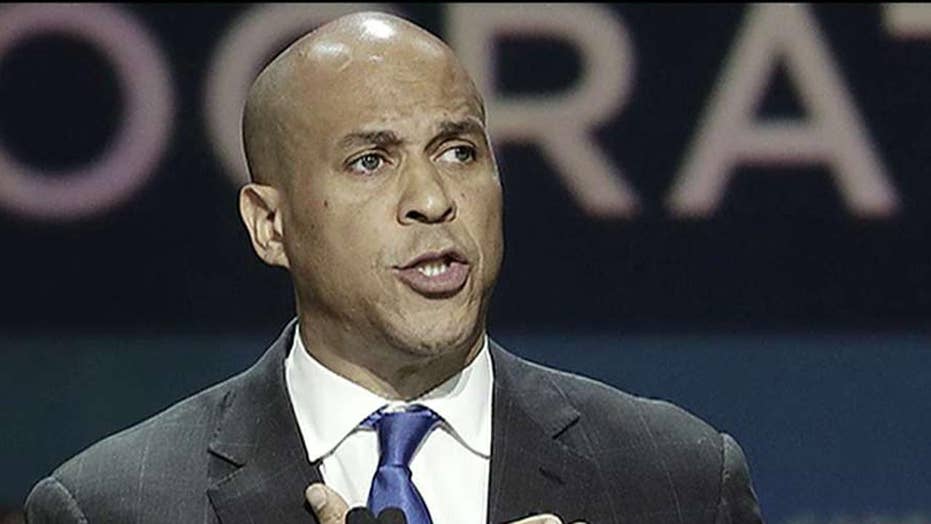 Sen. Cory Booker said on Sunday that Republican plans to quickly move on confirming a successor to late Supreme Court Justice Ruth Bader Ginsburg, who was the face of the liberal bloc of the court and a trailblazer for women's rights, would undermine the legitimacy of the court, which serves as a check on the other two branches of government and relies on its implicit legitimacy because it doesn't have official means with which to enforce its rulings.

Booker, D-N.J., is a member of the Senate Judiciary Committee that would play a key role in vetting and moving along any Trump nominee to fill Ginsburg's seat. He garnered headlines during the most recent Supreme Court confirmation for Justice Brett Kavanaugh after he declared an "I am Spartacus" moment after releasing an allegedly confidential email relating to Kavanaugh's confirmation although it had been cleared to be released at the time.

He is likely to again be at the forefront of Democrats' resistance to Trump's eventual Supreme Court nominee if Republicans move ahead with hearings.

Ex-Democratic presidential contender Cory Booker poses for photos after a black men's round table on Monday, Dec. 2, 2019, in Columbia, S.C. Booker is a member of the Senate Judiciary Committee which will play a key role in vetting any Supreme Court nominee from President Trump. (AP Photo/Meg Kinnard)

"I can only imagine that Justice Ginsburg... understood that the legitimacy of the Supreme Court at a time that other institutions in our democracy have been losing legitimacy, have been under attack," Booker said on CBS' "Face the Nation."

"I think she believed that the legitimacy of the court was so profoundly important. And this is one of those moments with so much at stake, from civil rights to voting rights to health care in and of itself, these decisions that the Supreme Court makes, it's important that they not only have the force of law but the force of the legitimacy of everyone. So, for Republicans to move forward like this, it really undermines that," he continued.

Booker emphasized that Senate Majority Leader Mitch McConnell has "a tremendous amount of control" over the Senate's agenda, but said he hoped some Republicans would be receptive to "a moral appeal" to wait until after the presidential election to move on a Supreme Court appointment.

CBS News' Margaret Brennan pushed back against Booker, noting that he had said in 2016 it was wrong for the Senate to delay action on then-President Barack Obama's nominee for late Justice Antonin Scalia's seat. Booker noted that the 2020 presidential election is much closer now than it was in 2016 when Scalia died and that in some states voting for the presidential election has already started.

He added that Republicans are reversing their 2016 position when they said voters should have a say in who gets to nominate the next Supreme Court justice.

"We had literally my colleagues speaking to what the rules should be, what the guiding principles they we're operating on," he said. "And for now for them to so severely violate their own words I think does a tremendous amount of damage to the institution of the Senate as well as to the legitimacy of the court."

Republicans argue that things are different now compared to how they were in 2016 -- the Senate in 2014 was elected to serve as a bulwark against then-President Barack Obama, they say, and was elected in 2018 to support Trump.

Brennan also asked Booker to weigh in on allusions some Democrats have made to packing the Supreme Court and getting rid of the legislative filibuster in the case that Republicans fill Ginsburg's seat but Democrats take the Senate and White House. Senate Minority Leader Chuck Schumer, D-N.Y., has said that "nothing is off the table" if that happens.

Booker did not directly address the question from Brennan, and instead implored Democrats to focus on winning the upcoming elections and convincing some moderate Republicans to buck their party on the Supreme Court nomination.

"There's a double presumption in there that I just do not want people to lose focus on," he said. Booker instead said people should let "their voices be heard now to appeal to the decency and honor of people who spoke what this process should be. And number two, is this election. Unless we win the Senate back, unless we win the White House, all these questions are just hypothetical and moot. We need to focus on what is at hand... We need to win this election. Everything is on the line."