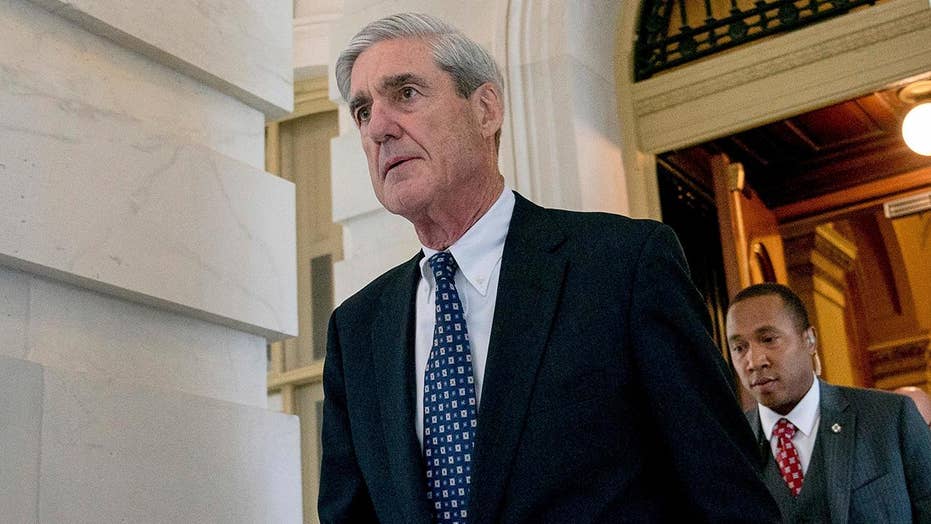 Senate Democrats are expected to grill Attorney General William Barr in a dramatic and explosive hearing on Wednesday morning at 10 a.m. ET, as he faces lawmakers' questions for the first time since releasing Special Counsel Robert Mueller's Russia report amid accusations he sought to present the investigation's findings in President Trump's favor.

In a late-breaking article sure to feature prominently in Wednesday's hearing, the Washington Post reported Tuesday evening that Mueller contacted Barr, both in a letter and in a phone call, to express concerns after Barr released his own public summary of the report in March. Mueller reportedly pushed Barr to release the executive summaries written by the special counsel's office.

However, according to both the Post and the Justice Department, Mueller made clear that he did not feel Barr's summary was inaccurate. Instead, Mueller told Barr that media coverage of the letter had "misinterpreted" the results of the probe concerning obstruction of justice.

“The summary letter the Department sent to Congress and released to the public late in the afternoon of March 24 did not fully capture the context, nature, and substance of this office’s work and conclusions,” Mueller told the DOJ. “There is now public confusion about critical aspects of the results of our investigation. This threatens to undermine a central purpose for which the Department appointed the Special Counsel: to assure full public confidence in the outcome of the investigations.”

In a statement to Fox News, DOJ spokesperson Kerri Kupec noted that Mueller had not faulted the accuracy of Barr's summary, and offered more details on Barr's actions.

“After the Attorney General received Special Counsel Mueller’s letter, he called him to discuss it," Kupec said. "In a cordial and professional conversation, the Special Counsel emphasized that nothing in the Attorney General’s March 24 letter was inaccurate or misleading. But, he expressed frustration over the lack of context and the resulting media coverage regarding the Special Counsel’s obstruction analysis. They then discussed whether additional context from the report would be helpful and could be quickly released."

Kupec added: "However, the Attorney General ultimately determined that it would not be productive to release the report in piecemeal fashion.  The Attorney General and the Special Counsel agreed to get the full report out with necessary redactions as expeditiously as possible. The next day, the Attorney General sent a letter to Congress reiterating that his March 24 letter was not intended to be a summary of the report, but instead only stated the Special Counsel’s principal conclusions, and volunteered to testify before both Senate and House Judiciary Committees on May 1st and 2nd.”

A Republican House Judiciary Committee spokesperson told Fox News that "recent media reports give us more reason than ever to have confidence in the attorney general by providing insight into how the attorney general and the special counsel successfully collaborated to navigate a very difficult and historically momentous situation, culminating in the release of the Mueller report, which provides the account of the special counsel’s investigation in the words of Mr. Mueller and his team."

The spokesperson added: "As the Senate Judiciary Committee prepares for tomorrow’s hearing, House Democrats have another opportunity to put partisan politics aside and recognize Attorney General Barr has conducted himself in an exemplary manner.”

But Democrats pushed back hard. In a tweet, House Judiciary Committee chairman Jerry Nadler, D-N.Y., demanded that Mueller testify, and suggested that Barr had misled lawmakers.

Maryland Democrat Sen. Chris Van Hollen agreed, writing on Twitter that Barr "must resign" because he "misled me, the Congress, and the public."

Conservative commentators countered that Nadler was misrepresenting the situation.

"Barr was being asked whether Mueller agreed with his ultimate conclusion on obstruction, not whether he agreed with his summary, his framing, etc.," Washington Free Beacon reporter Alex Griswold wrote.

Seemingly mindful of the inevitable partisan politics that will follow his appearance, Barr's opening remarks at Wednesday's hearing, released late Tuesday, conclude: “From here on, the exercise of responding & reacting to the report is a matter for the American people & the political process.”

But in a statement, Nadler pressed on: "The Special Counsel’s concerns reflect our own. The Attorney General should not have taken it upon himself to describe the Special Counsel’s findings in a light more favorable to the President. It was only a matter of time before the facts caught up to him."

Nadler also said Barr "should not have withheld [Mueller's] letter from Congress for as long as he has." Nadler added, "I have demanded a copy from the Department of Justice. I have asked that it be delivered no later than 10:00 tomorrow morning."

Hours before the Post's article outlined Mueller's apparent concerns, a dozen Democratic senators on Tuesday called for the Justice Department’s inspector general and the Office of Professional Responsibility to launch an investigation into Barr's handling of the Mueller report.

Barr's appearance before the Senate Judiciary Committee is expected to last more than three hours. The hearing will provide the attorney general his most extensive opportunity to explain the department's actions, including a press conference held before the report's release, and for him to confront head-on the partisan allegations that he's sacrificed his integrity to become the president's protector.

Barr is also separately invited to appear on Thursday before the Democratic-led House Judiciary panel, but the Justice Department said he would not testify if the committee insisted on having its lawyers question the attorney general, instead of members of Congress.

DOJ officials told Fox News they were "blindsided" by Democrats announcing over the weekend that lawyers would be the ones asking Barr questions. Assistant Attorney General for Legislative Affairs Stephen Boyd went to Capitol Hill on Monday to try and work things out, but the issue has apparently remained unresolved.

Fox News is told House Democrats will vote on how to proceed on the matter on Wednesday, and that the DOJ considers the idea of staffers questioning a sitting Cabinet member "off the table."

After House Judiciary chairman Jerry Nadler, D-N.Y., said he would not compromise and that staff would question Barr -- and even threatened to arrest White House officials who did not comply with subpoenas -- White House adviser Kellyanne Conway said Tuesday that Congress "needs to calm down."

“The attorney general agreed to appear before Congress; therefore Congress does the questioning," a DOJ official told Fox News, as the ongoing public spat continued.

"Attorney General Barr wasn’t asked to testify before the committee—he offered," a spokesperson for House Judiciary Committee Republicans added in a statement to Fox News. "He provided the Mueller report voluntarily. He invited Democrat leaders to view the less redacted report in person. Yet the only thing, apparently, that will satisfy Democrats, who refuse to read the less redacted report, is to have staff pinch hit when a cabinet-level official appears before us."

Barr's Senate appearance Wednesday will be on friendlier turf, before a Republican-led committee chaired by a close ally of the president, Sen. Lindsey Graham of South Carolina. Graham expected to focus on concerns that the early days of the FBI's Russia investigation were tainted by law enforcement bias against Trump.

Democrats are likely to focus on Barr's statements and actions in the last six weeks that have unnerved them. The tense relations are notable given how Barr breezed through his confirmation process, picking up support from a few Democrats and offering reassuring words about the Justice Department's independence and the importance of protecting the special counsel's investigation.

The first hint of discontent surfaced last month when Barr issued a four-page statement that summarized what he said were the main conclusions of the Mueller report. In the letter, Barr revealed that he and Deputy Attorney General Rod Rosenstein had cleared Trump of obstruction of justice after Mueller and his team found evidence on both sides of the question but didn't reach a conclusion.

Barr is likely to defend himself by noting how he released the report on his own, even though he didn't have to, under the special counsel regulations, and that doing so fulfilled a pledge he made at his confirmation hearing to be as transparent as the law allowed. Barr may say that he wanted to move quickly to give the public a summary of Mueller's main findings as the Justice Department spent weeks redacting more sensitive information from the report.

After the letter's release, Barr raised eyebrows anew when he told a congressional committee that he believed the Trump campaign had been spied on, in light of the fact the FBI obtained a secret surveillance warrant to monitor the communications of members of the Trump team -- in part based on inaccurate and politically biased information.

Barr equivocated on a question of whether Mueller's investigation was a witch hunt, saying someone who feels wrongly accused would reasonably view an investigation that way. That was a stark turnabout from his confirmation hearing, when he said he didn't believe Mueller would ever be on a witch hunt.

A person familiar with Barr's thinking has said that Barr, a former CIA employee, did not mean spying in a necessarily inappropriate way and was simply referring to intelligence collection activities.

Attorney General William Barr speaks about the release of a redacted version of special counsel Robert Mueller's report during a news conference, Thursday, April 18, 2019, at the Department of Justice in Washington. (AP Photo/Patrick Semansky)

Then came Barr's April 18 press conference to announce the release of the Mueller report later that morning -- a move that made Barr a punching bag for progressives frustrated by Mueller's failure to find evidence linking the Trump team to collusion with Russia.

The attorney general also praised the White House for giving Mueller's team "unfettered access" to documents and witnesses and suggested the president had the right to be upset by the investigation, given his "sincere belief that the investigation was undermining his presidency, propelled by his political opponents, and fueled by illegal leaks."

It remained unclear Tuesday whether Barr would appear before the House committee. Nadler, the House Judiciary chairman, has said witnesses could too easily filibuster when questioned by lawmakers limited by five-minute time limits. Having lawyers do the questioning enables the committee "to dig down on an issue and pursue an issue," he claimed.

"And it's not up to anybody from the executive branch to tell the legislative branch how to conduct our business," Nadler said.

The committee will vote on allowing staff to question Barr at a separate meeting on Wednesday, at the same time Barr takes questions from the Senate.

Nadler "has taken a voluntary hearing and turned it into a sideshow," Collins said.

"The Justice Department's stance appears consistent with the Trump administration's broader strategy of "undermining Congress as an institution," said Elliot Williams, who previously served as deputy assistant attorney general in the department's legislative affairs office in the Obama administration and as a lawyer on a Democratic-led Senate Judiciary Committee.

He said that if he were still advising an attorney general, he would resist the idea of staff questioning a Cabinet official.

"It's a rational response to not want them questioning the attorney general," Williams said.