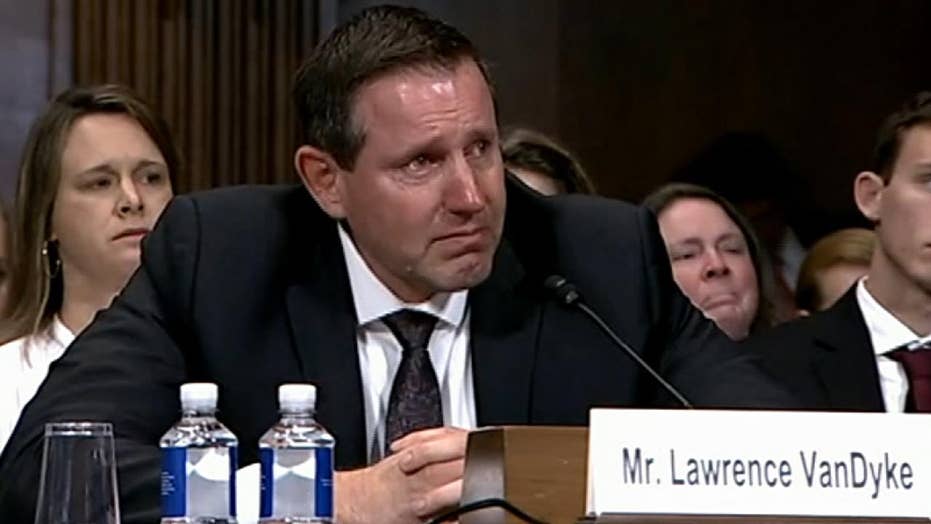 Raw video: Appeals court nominee Lawrence VanDyke rejects claim by the American Bar Association that he would not be fair to members of the LGBTQ community.

Several attorneys interviewed by the American Bar Association for their evaluation of President Trump’s Ninth Circuit judicial nominee Lawrence VanDyke say they were stunned when they read what turned out to be a scathing assessment declaring VanDyke “Not Qualified” to sit on the federal bench.

VanDyke broke down in tears during Wednesday’s Senate Judiciary Committee hearing when he addressed and denied the letter’s suggestion that he would be unfair to LGBTQ groups. The ABA also cited accusations against the nominee of arrogance, laziness and overall incompetence from unnamed associates. Afterward, some in the legal community jumped to VanDyke's defense.

"Absolutely outrageous and couldn't be further from the truth," is how former Nevada Attorney General Adam Laxalt described the characterizations in the ABA's letter. VanDyke served as state solicitor general under Laxalt, a Republican who unsuccessfully ran for governor last year, from 2015 to 2019.

Laxalt told Fox News he worked with VanDyke every day for four years and said "he is incredibly hardworking" and "absolutely brilliant." While the ABA said interviewees thought VanDyke was arrogant, Laxalt claimed he was humble.

Laxalt's interview was one of 60 the ABA conducted for their evaluation process. He spoke on the phone with Marcia Davenport, who was called out by Republicans for having previously contributed to the judicial campaign of someone who ran against VanDyke in the past.

During the interview, Laxalt said, Davenport "seemed completely disinterested" in his glowing recommendation. He said she did not ask follow-up questions and did not ask about any of the cases the two men worked on together, despite opening the interview by noting that nine of the 10 most important cases VanDyke listed were from his time working for Laxalt.

While the ABA's letter said that “[t]he negative issues discussed in this letter were thoroughly discussed with interviewees," Laxalt said Davenport "never brought up anything negative," and as a result he did not have the opportunity to defend him.

Joseph Tartakovsky, who was the Nevada deputy solicitor general for three years under VanDyke, said his interview with Davenport lasted five to seven minutes, during which "it was clear to me that she was going through the motions," as she did not ask follow-up questions.

Tartakovsky said he was "surprised and dismayed" when he read the ABA's letter, as he too gave VanDyke a strong recommendation, saying he was an "exceptional lawyer" who would be good for the job.

"I told her that I thought he was born to be a judge," Tartakovsky told Fox News.

Ashley Johnson, who worked with VanDyke for several years at the Dallas office of law firm Gibson Dunn, posted a Twitter thread about her experience being interviewed by Davenport, during which Johnson gave a glowing review.

"The call lasted fewer than 5 minutes," Johnson tweeted, claiming that Davenport seemed to be reading from "a script of questions" before thanking her and hanging up.

Johnson told Fox News that "the entire call seemed very cursory," and that she figured this was "because Lawrence is so obviously qualified and of the highest integrity."

Another attorney who has worked with VanDyke, former Utah solicitor general Parker Douglas, found it "a little surprising" that he was not interviewed by the ABA, given his history working alongside VanDyke.

"I was surprised by the letter," Douglas told Fox News.

"The guy's not lazy, I can tell you that," he added. He recalled having esoteric conversations with VanDyke about appellate procedure, called him a "great appellate practitioner, and said it would be "just nonsense" to say otherwise. 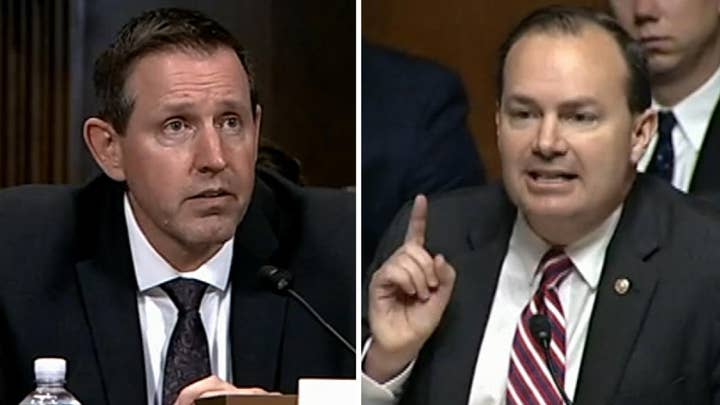 The ABA did not directly address Fox News' questions about their evaluation process, but William C. Hubbard, chair of the ABA Standing Committee on the Federal Judiciary, issued a statement.

"The Standing Committee bases its evaluations solely on a review of integrity, professional competence, and judicial temperament," he said, adding they are "based on interviews with judges, lawyers, and other professionals who know or who have worked with the nominee" and "represents a composite of those interviews from the peer review process."

The assessment itself was scathing.

"Mr. VanDyke’s accomplishments are offset by the assessments of interviewees that Mr. VanDyke is arrogant, lazy, an ideologue, and lacking in knowledge of the day-to-day practice including procedural rules," it said, explaining why despite his professional and academic experience, they gave him a "Not Qualified" rating. "There was a theme that the nominee lacks humility, has an 'entitlement' temperament, does not have an open mind, and does not always have a commitment to being candid and truthful."

Twenty-two current and former state solicitors general, including Douglas, sent a letter to Senate leaders in support of VanDyke’s nomination the day before the ABA issued their rating.

“Our backgrounds, political philosophies, and state interests are diverse, yet we are united in our judgment that Mr. VanDyke’s character, legal acumen, and commitment to public service will make him an exceptional member of the federal bench,” they said.

VanDyke also said during the hearing that he was “shocked” when he read the ABA letter. He was specifically affected by the claim that there was concern over whether he would be fair to members of the LGBTQ community who appear before him in court, and the implication that his own ABA interview supported that concern.

"No, I did not say that," VanDyke told the Senate with tears in his eyes. "I do not believe that. It is a fundamental belief of mine that all people are created in the image of God. They should all be treated with dignity and respect, senator."

Sen. Patrick Leahy, D-Vt., perhaps shedding light on where such concerns may have originated, asked VanDyke about a 2004 op-ed he wrote about how same-sex marriage may be harmful to children. VanDyke said his views have changed since then, but noted that personal views do not come into play in his judicial decision-making.

Senate Republicans have put diminishing stock in the ABA's evaluations in recent years. In 2017, the organization deemed Charles Barnes Goodwin and Leonard Steven Grasz "Not Qualified" when Trump nominated them to the Western District of Oklahoma and Eight Circuit Court of Appeals, respectively. The GOP-controlled Senate confirmed both of them.

At VanDyke's hearing, Sens. Mike Lee, R-Utah, and Josh Hawley, R-Mo., called out the ABA for an alleged agenda and suggested they lose access to judicial nominees as a result.

The Wall Street Journal’s editorial board called the organization a “liberal lawyers’ guild” and described their letter as “character assassination” and “a mess of anonymous personal attacks and innuendo.”

Making the same suggestion as Sens. Lee and Hawley, the editorial concluded, “It is free to oppose candidates for ideological reasons, but it ought to be stripped of its privileged role in the confirmation process.”