MIAMI – The second and final debate in the race to become the next Florida governor, which happened on the same day that both political parties called for civility amid a series of pipe bombs mailed to politicians across the country, became nasty.

Florida Congresswoman Debbie Wasserman-Schultz, whose office was evacuated Wednesday after one of the package-bombs arrived at her Sunrise, Fla., office, was among those who attended the debate.

“He has spoken at racist conferences,” said Democratic Tallahassee Mayor Andrew Gillum, who is black, about his opponent, former Congressman Ron DeSantis. “He has neo-Nazi’s helping him out in the state. I’m not calling Mr. DeSantis a racist. I’m simply saying racists believe he’s a racist.”

“How the hell am I supposed to know every statement everyone makes? As governor, I will represent all the people,” DeSantis said.

DeSantis reiterated his daily attack on Gillum as a corrupt liar, specifically on the biggest political news in Florida this week, a 130-page list of text messages and photos from 2016, all subpoenaed by the state’s Commission on Ethics, which is investigating the mayor. The document dump has put Gillum—who has led in poll after poll—on the defensive and threatens his momentum with less than two weeks until Election Day.

"He wants you to believe that he's not under investigation,” said DeSantis. “Why would an undercover FBI agent posing as a contractor give him a $1,000 ticket to Hamilton?"

At issue: An August 2016 trip to New York City Gillum made with his brother, former friend and lobbyist Adam Corey, and three undercover FBI agents, posing as developers looking for city business.

The question is who paid for Gillum’s ticket to see the hit musical Hamilton and a night at the Millennium hotel. Under Florida’s ethics rules, any gift more than $100 must be reported, which these weren’t. 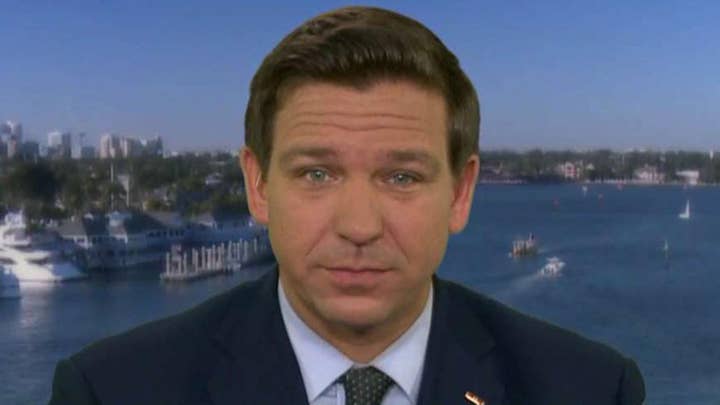 Here are the texts:

“Mike Miller” (an undercover FBI agent): “Looks like the weather might not be great tomorrow.  Maybe a show instead?”  Have you seen Hamilton?”

Corey (the lobbyist):  “That would be epic!”

Corey then texts Gillum:  “Matt Miller and the crew have tickets for us for Hamilton tonight at 8pm.”

Gillum: “I can be free by 6 p.m. Awesome news about Hamilton.”

And this, regarding the hotel room:

Gillum:  “I was mistaken. I think I will need a room tomorrow night.”

Gillum repeated his explanation that, at the time, he assumed his brother Marcus had paid for the Hamilton ticket, by trading it for a Jay-Z concert ticket.

"I did go and see Hamilton,” said Gillum. "I arrived at that theater and received my ticket from my brother. The problem that I have is that I should have asked more questions."

He added this, which got laughs from the audience:

“I take responsibility for not asking more questions. We’ve got 99 issues and Hamilton ain’t one of them.”

DeSantis stuck to his guns. “He got a junket. Tallahassee got something. That’s the definition of bribery.”

Throughout the campaign, DeSantis has decried Gillum’s plan to raise the state’s corporate tax rate 40 percent, in order to put a billion dollars into education and teacher salaries. DeSantis said it will hurt the economy and jobs.

“Low-earning people are going to be hurt the most,” DeSantis said. “They will stop people from investing in Florida. I will let others know we are open for business.”

When the subject of guns and February’s Stoneman Douglas High School massacre, which killed 17 and wounded 17 others, Gillum repeated his plan to ban assault weapons.

“Our proposal is simple,” said Gillum. “If you want to fire a weapon that shoots multiple rounds of ammunition in 60 seconds you join the military.”

He also pointed out that the National Rifle Association endorses DeSantis, as has President Trump.

This debate was only the second time the two men had actually met in person.

And, based on their tones and accusations, it may be their last.