“If the president thinks that I’m crazy, I think that’s a good thing because I think it would be a problem if he said he agrees with my ideas because he has many problems,” Ocasio-Cortez told Noticias Telemundo’s Correspondent Guadalupe Venegas. “He’s racist, he’s anti-immigrant, but more than just that — his administration is corrupt. I think he’s afraid of women – of strong women, of Latina women. The values of the president are very backward.”

“If the president thinks that I’m crazy, I think that’s a good thing because I think it would be a problem if he said he agrees with my ideas because he has many problems.”

AOC, CAMPAIGNING FOR BERNIE SANDERS, SAYS IT WOULD 'BE AN HONOR' TO BE VP

In October, Trump called Ocasio-Cortez a “Wack Job” on Twitter, to which she retorted "Better than being a criminal who betrays our country.” The social media spat came as the White House refused to comply with the impeachment inquiry by the Democrat-led House.

Ocasio-Cortez admitted Trump never explicitly told her he fears Latina women, but she claimed he’s demonstrated his fears in Twitter messages and in his State of the Union address back in February.

When asked about concerns that she and Sanders endorse socialism, Ocasio-Cortez sought to make a distinction between what’s viewed as socialism in the United States and in other countries. Venegas referenced Venezuela – where socialist policies, implemented by dictators Hugo Chavez and Nicolas Maduro, have forced more than 4 million people to flee an economic and humanitarian crisis in the country since the end of 2015, according to figures released by the UN Refugee Agency.

“When the president or other people want to say this, the first I say is look at the politics, the proposals because we’re not advocating for complete control of the economy. We’re talking about basic human economic rights – education, health care, a worthy salary,” Ocasio-Cortez said. “Here in the United States, those values are called 'socialism.'  And for me, that’s a commentary on the present moment in the United States. Things that are human rights are called socialism. It’s very different what we’re seeing here and in other countries.”

Ocasio-Cortez said she supports Sanders because “he understands that this isn’t a campaign about a person. It’s a campaign about our movement for working families in the United States.” She said she’ll ultimately support whichever candidate receives the Democratic Party’s presidential nomination because “we have to get this president out of office.”

“It’s not good for a country as diverse as the United States to have such an intolerant president,” she added.

Ocasio-Cortez hosted an event in Las Vegas called “Unidos Con Bernie Reunión Política con Rep. Alexandria Ocasio-Cortez” on Sunday. Nevada will host the third Democratic nominating contest in February following a primary in New Hampshire and a caucus in Iowa early next year. Sanders is dispatching Ocasio-Cortez, who endorsed him for the White House in October, to appeal to Nevada’s large Latino electorate and position himself ahead of his progressive rival, Sen. Elizabeth Warren. 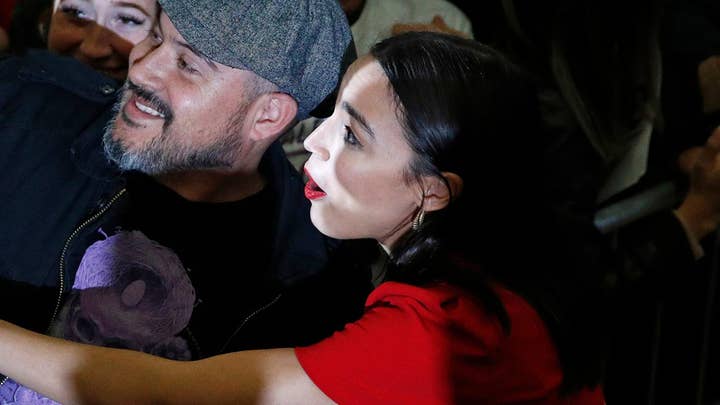 Speaking at another event for Sanders in California last week, Ocasio-Cortez claimed that the United States is no longer an advanced society and has regressed into fascism.

“As much as we’d like to say the United States is the richest country in modern history,” Ocasio-Cortez began at a campaign event in Venice, Calif. “Who cares about how much gold is being amassed if we can’t realize an advanced society with those resources.

“We’re here to say that what we’re living in is not an advanced society,” Ocasio-Cortez said, prompting someone in the crowd to ask “Why aren’t we calling it fascism? That’s what it is!”

“It is Fascism!” Ocasio-Cortez agreed.