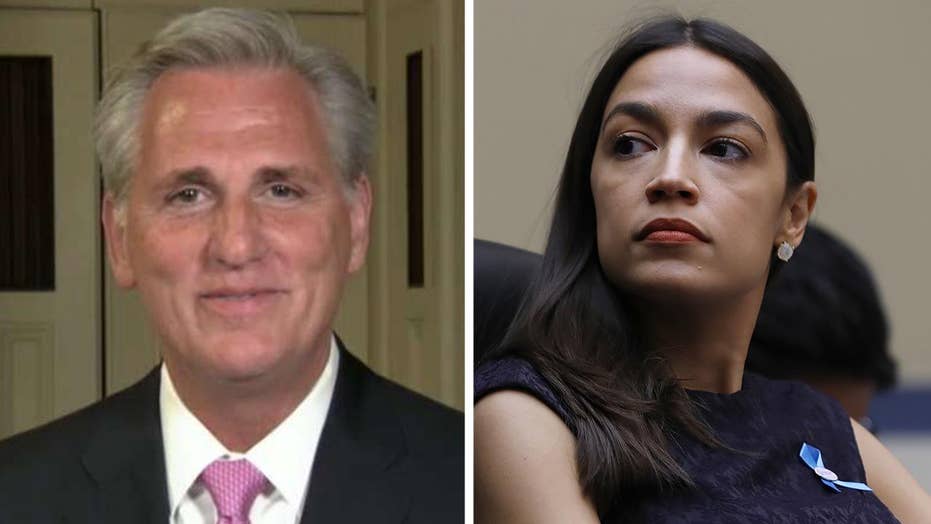 "I will never apologize for calling these camps what they are," she tweeted response to a call by House Minority Leader Kevin McCarthy's, R-Calif., for her to apologize.

"DHS ripped 1000s of children from their parents & put them in cages w inhumane conditions," she added. "They call their cells 'dog pounds' & 'freezers.' If that makes you uncomfortable, fight the camps, not the nomenclature."

"There's a lot of fake GOP outrage from folks who have no problem with warehousing thousands of innocent, desperate people in barbed-wire enclosures that look and function like concentration camps," Huffman said Wednesday. "Can we please talk about that?"

McCarthy joined a number of Republicans and other government figures who took offense at her comparison, including Acting Immigration and Customs Enforcement DIrector Mark Morgan who called the New York congresswoman's comments "irresponsible."

"This type of rhetoric from our elected leaders is reckless, irresponsible, misinformed and wrong," he told Fox News on Wednesday.

CHARLIE KIRK: OCASIO-CORTEZ 'THE MOST POWERFUL DEMOCRAT IN OFFICE'

The controversy erupted on Tuesday when Ocasio-Cortez streamed an Instagram video of herself taking another shot at President Trump's immigration policies.

House GOP Chairwoman Liz Cheney, R-Wyo., called out those comments, saying her progressive colleague disrespected the memory of Jews who died in the Holocaust.

Amid all the backlash, Ocasio-Cortez mocked Republicans for "shrieking" over an assumed comparison between "concentration camps" and the death camps that Nazis used during the Holocaust.

She added on Wednesday that the U.S. engaged in the "shameful" practice of using concentration camps when it detained Japanese-Americans during World War II.

"It is such a shameful history that we largely ignore it," she said. "These camps occur throughout history. Many refuse to learn from that shame, but here we are today. We have an obligation to end them."

House Judiciary Chairman Jerrold Nadler, D-N.Y., showed support for Ocasio-Cortez's comments, tweeting: "One of the lessons from the Holocaust is ‘Never Again’ - not only to mass murder, but also to the dehumanization of people, violations of basic rights, and assaults on our common morality.

"We fail to learn that lesson when we don’t callout [sic] such inhumanity right in front of us," Nadler added.

"I do have some comments to make to my caucus writ large about the political nature of how politically charged the atmosphere is," she said. "So, understand that while the Republicans have no interest in holding the president accountable for his words, they will misrepresent anything that you say, just if you have one word in the sentence that they can exploit."