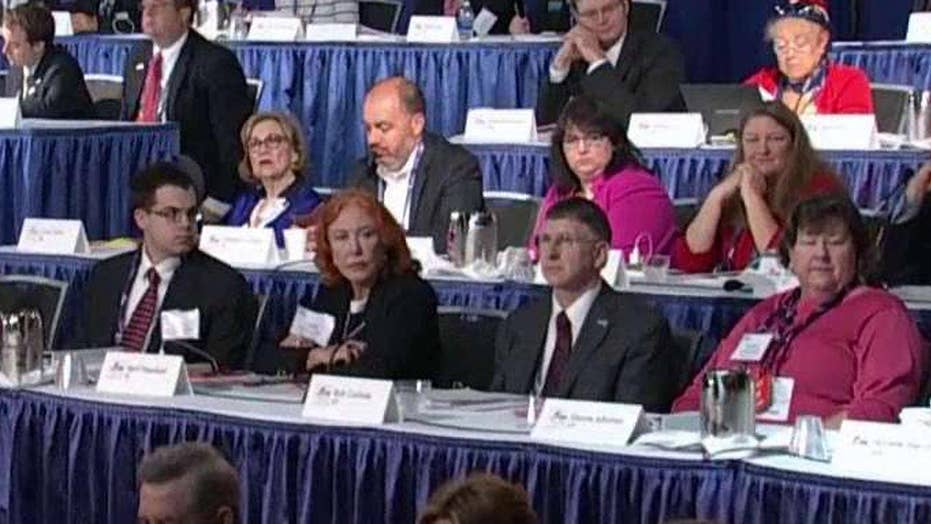 Can the GOP platform reflect both the party and Trump?

The party's issues are being debated before the convention in Cleveland; James Rosen has the story for 'Special Rpeort'

The stop-Trump movement isn't dead yet -- and Ohio Gov. John Kasich could be their last hope.

Republicans opposed to Donald Trump’s 2016 bid reportedly are making a fresh pitch for Kasich to step up as an alternative candidate ahead of the party’s convention in Cleveland. Former New Hampshire Sen. Gordon Humphrey asked Kasich allies Sunday to contact the former presidential candidate and urge him to offer himself as an alternative at the convention, according to Cleveland.com.

"Given our shared effort in the Kasich campaign, I am sure you agree," Humphrey reportedly wrote. "But, John needs encouragement to make the move. Please email John and offer him your encouragement and continued backing. ... It's not going to get better than this, but time is of the essence."

Humphrey’s email highlights a key difficulty the anti-Trump Republican have faced – they don’t have an alternative candidate waiting in the wings as a rallying point for those opposed to the billionaire’s nomination.

Prominent anti-Trump commentator William Kristol made a similar call on Sunday, calling for either Kasich or 2012 Republican nominee Mitt Romney to step in at the last minute.

Kristol previously had tried to convince a number of possible candidates to step up to the plate against Trump, to no avail. He eventually eyed National Review writer David French – who opted not to run.

Kasich has remained coy about his plans, telling The Washington Post he has no plans to endorse Trump or speak at the convention, but that he is not shutting down his political operation.

“I’m not shutting my political operation down,” the governor of the host state said. “I’m not closing any doors. But my focus right now is going to be on the House, the Senate, and the down-ticket here in my state.”

The anti-Trump movement also faces a hurdle in party rules binding delegates to the candidate they were assigned by their state contests. To have a chance at the convention, supporters have to convince the GOP Rules Committee to change those rules in order to allow delegates to vote their conscience.

The committee is set to meet Wednesday and Thursday.

Politico reports that anti-Trump delegates led by Colorado’s Kendal Unruh are trying to scrape together support for a so-called "conscience clause" at the convention.

Unruh told Fox News Tuesday that the rules committee delegations from five states, as well as two individuals, are preparing to announce their support for a rule change, and that she has the support of more than a dozen others.

Anti-Trump delegates were given a small boost Monday when a Virginia judge ruled that the state can’t force its delegates to vote in a winner-take-all fashion, as stated in an obscure portion of Virginia election law. But the law in question was so obscure that Republicans had already decided to allocate delegates in a proportional fashion, based on the results of the state's March 1 primary, which Trump won. The ruling leaves that unchanged.

"Requiring delegates to vote for any candidate is unconstitutional and today's announcement is a blow to Trump's efforts," said Correll.