Sen. Amy Klobuchar, D-Minn., released a sweeping plan for her first 100 days as president -- touching on a wide range of issues and pledging to reverse many of the decisions made under President Trump's administration.

Similarly to her fellow 2020 Democrats, Klobuchar pledged to utilize executive action in order to implement gun control. While Sen. Kamala Harris, D-Calif., pledged to close the "boyfriend loophole" -- allowing domestic abusers to obtain firearms -- after 100 days of Congressional inaction, Klobuchar said she would act "immediately" to block access for those individuals.

"Senator Klobuchar leads legislation in the Senate to close the ‘boyfriend loophole’ by preventing people who have abused dating partners from buying or owning firearms," her plan read, "and she will take executive action to get it done immediately." 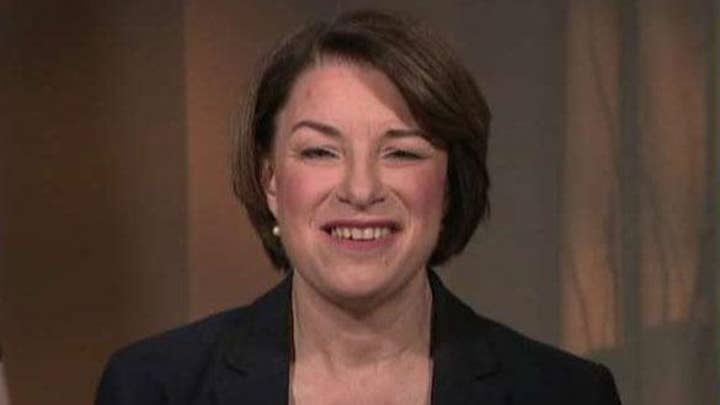 Like Biden, she proposed sweeping legislation that "builds on the framework of the "Green New Deal" -- just the latest indication that the freshman congresswoman is influencing the direction of the 2020 Democratic primaries.

Ocasio-Cortez, in particular, has demanded bold plans for climate change and health care, sharply criticizing a 2020 candidate who denounced "Medicare for all."

Klobuchar's plan doesn't explicitly call for "Medicare-for-all" but implies that by proposing a "public health care option" coming from expansions to either that entitlement or Medicaid. "Senator Klobuchar will propose legislation that gets us to universal health care," the proposal read.

Her other plans included reversing Trump's actions on the Affordable Care Act and immigration. She also pledged to reduce private school vouchers and go beyond the sanctions the administration already placed on Russia.

"Senator Klobuchar will use these authorities to the fullest extent possible to impose serious costs on the Putin regime and its enablers for hostile acts against the United States and our allies," the plan said, accusing Trump of failing to fully implement sanctions.

Klobuchar has consistently trailed several other Democratic candidates, including Sens. Elizabeth Warren, D-Mass., Kamala Harris, D-Calif., and Bernie Sanders, I-Vt. She was, however, able to make it onto the stage for the first Democratic primary debate at the end of June.