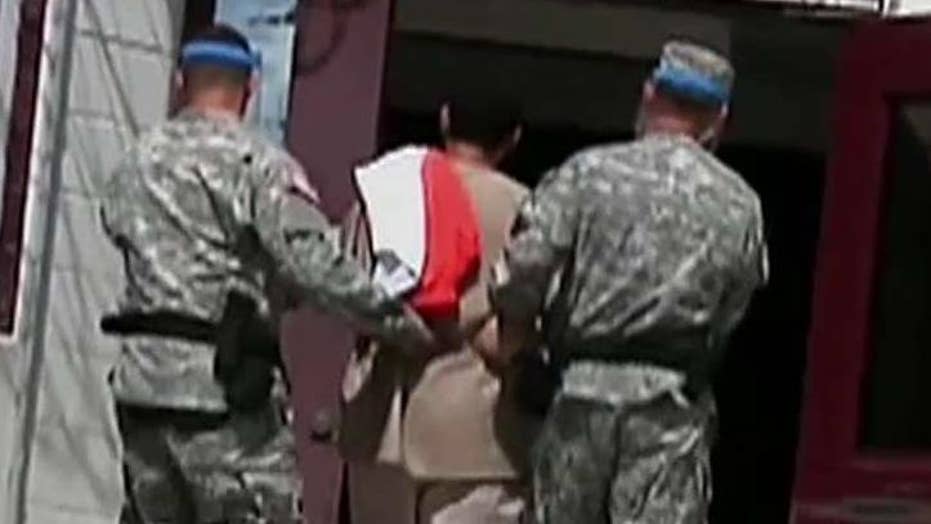 Pentagon plans next round of Guantanamo Bay transfers

Two of Al Qaeda's former explosives experts were just transferred out of Guantanamo Bay and sent to Senegal, the Defense Department confirmed Monday, marking the latest detainees to be shipped out of the prison camp despite the risk they could return to the battlefield.

The two Libyan former detainees were separately listed as threats to U.S. interests in Department of Defense documents obtained by Wikileaks and The New York Times.

Salem Abdu Salam Ghereby is believed to have fought coalition forces at Usama bin Laden’s Tora Bora complex in Afghanistan “and was associated with senior members of Al Qaeda.” Omar Khalif Mohammed Abu Baker Mahjour Umar was assessed to be likely to “immediately seek out prior associates and reengage in hostilities and extremist support activities” upon his release, according to a 2008 government document.

The news comes as senators prepare to introduce legislation to permanently block transfers of Guantanamo detainees to terror hot spots and state sponsors of terrorism including Yemen, Libya, Somalia, Syria, Iran and Sudan. Sen. Mark Kirk, R-Ill., was expected to introduce a bill as early as Monday, Fox News has learned.

The transfer of Ghereby and Umar reduces the Guantanamo detainee population to 89, according to the Department of Defense. They are part of the Obama administration's long-running and controversial effort to reduce the prison population and ultimately close the camp.

By law, the Pentagon must notify Congress 30 days in advance of any detainee transfer. The first notification for the individuals now identified as Ghereby and Umar was in early March. Others are expected in the next few weeks.

“We are taking all possible steps to reduce the detainee population at Guantanamo and to close the detention facility in a responsible manner that protects our national security,” Secretary of State John Kerry said in a statement on Monday.

The two detainees sent to Senegal had long records of supporting Al Qaeda and close ties to the terror organizations’ top leaders.

Umar, 44, had “threatened to kill U.S. personnel on several occasions” while at Guantanamo, according to the Department of Defense reports revealed by the Times and Wikileaks.

“Detainee has been cooperative, but continues to withhold information of intelligence value, and also shares his extensive explosives knowledge with other detainees,” the report said.

Umar has been engaged in extremism since at least 1998 and flew on a bin Laden-chartered plane from Sudan to Afghanistan.

“Detainee is a long-time associate of UBL and has affiliations to other senior Al Qaeda leaders and operatives including Ayman al-Zawahiri,” the report said.

Ghereby, 55, has been involved in extremist activities since at least the mid-1990s and was “captured with a senior Al Qaeda leader after fleeing to Pakistan,” according to the DOD report.

“Detainee is assessed to be a HIGH risk, as he is likely to pose a threat to the U.S., its interests and allies,” the report said.