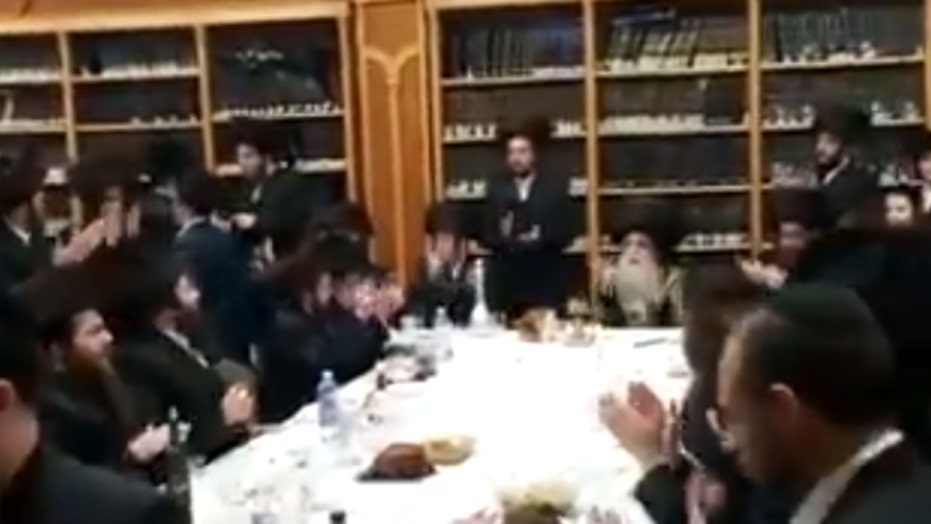 The assault happened in Monsey, New York by a machete-wielding suspect who drove away; Jacqui Heinrich reports.

Five people were stabbed at a rabbi's home in New York during a Hanukkah celebration on Saturday night — but that didn't stop worshippers from continuing their prayers at a synagogue next door.

Soon after the attack in the suburb of Monsey, located just 35 miles north of New York City in Rockland County, Rabbi Chaim Rottenberg and his followers gathered at the adjacent synagogue, which the rabbi leads, and sang together in prayer.

The Orthodox Jewish Public Affairs Council for the Hudson Valley tweeted a video of Rottenberg and his followers continuing their celebration of the seventh night of Hannukah. "The grace of God did not end and his mercy did not leave us," they sang, according to a translation of their song posted online.

Earlier in the night, around 10 p.m., a suspect stabbed and wounded five Hasidic Jews — including one who remained in critical condition with "wounds to the head" Sunday, according to New York Gov. Andrew Cuomo — before fleeing in a vehicle. Officials initially said the stabbing took place in the synagogue, but it was later clarified the attack happened inside the house, which public records indicate belongs to Rottenberg.

NYPD investigating series of anti-Semitic attacks since start of Hanukkah

The unidentified suspect, who was later taken into custody in the Harlem neighborhood of Manhattan by the NYPD and faces five counts of attempted murder and one count of burglary, "started attacking people right away as soon as he came in the door," one witness told The New York Times.

A motive for the attack was not immediately clear, but the incident unfolded in a town not far from the New Jersey state line — a state which recently saw a targeted mass shooting at a kosher market — and one of several in the Hudson Valley that has seen an influx of Hasidic Jews in recent years.

“Let me be clear: anti-Semitism and bigotry of any kind are repugnant to our values of inclusion and diversity and we have absolutely zero tolerance for such acts of hate," the governor said in a previous statement. “In New York we will always stand up and say with one voice to anyone who wishes to divide and spread fear: you do not represent New York and your actions will not go unpunished.”

Just last month, a man was stabbed while walking to a synagogue in Monsey. His injuries required surgery and it's unclear whether an assailant has been arrested in that attack.

In New York City along, authorities have received at least six reports — eight since Dec. 13 — of attacks possibly motivated by anti-Jewish bias. Mayor Bill de Blasio said Friday that police presence would increase in Brooklyn neighborhoods that are home to large Jewish populations. He said following Saturday night's attack, "We will NOT allow this to become the new normal."