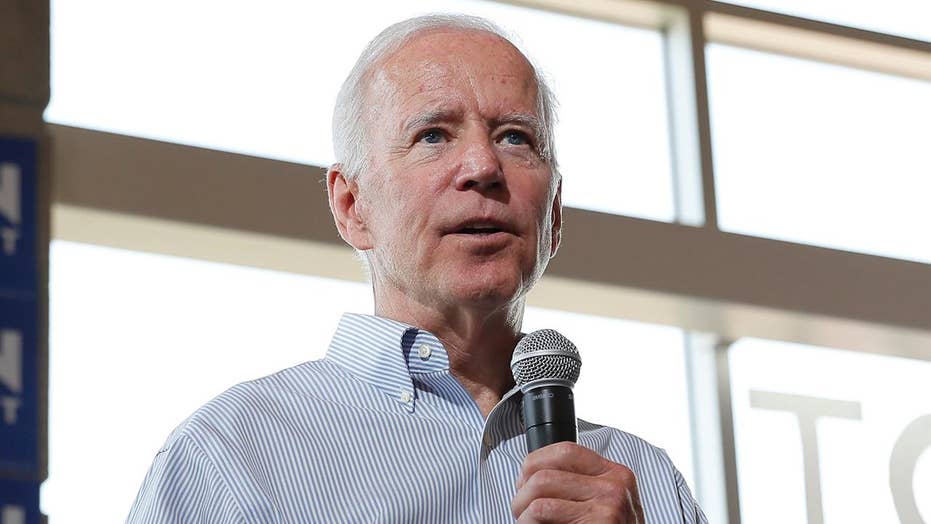 Should Biden's history of flip-flops be a concern for voters?

A left-wing activist has accused Democrat presidential frontrunner Joe Biden of trying to intimidate her after an event in Iowa on Tuesday, alleging that the former vice president "leaned forward, raised his voice, tried to grab my arm with his free hand."

"For a hot sec I thought he was going to hit me," the activist, who goes by the name Cayo and does not use traditional gender pronouns, said after the episode.

"There’s no reason to wag your finger at a womxn or reprimand them for asking questions," Cayo added. ("Womxn" is a neologism used by feminists to emphasize that their definition of womanhood includes transgender and other individuals.)

Cayo uploaded a photo and brief video of the encounter online, where it quickly spread -- and galvanized some Democrats who have long been concerned that Biden is not in tune with the party's insurgent progressive wing.

The Biden campaign did not respond to Fox News' request for comment. Cayo, on social media, has separately posted approving comments about Biden rivals, including Elizabeth Warren, D-Mass.

"Told Biden we need someone stronger on reproductive justice, and after his reversal on the Hyde Amendment, we asked him to protect assault survivors," Cayo wrote in a now-viral Twitter post. "He said, 'Nobody has spoken about it, done more, or changed more than I have.' I told him we deserve better."

In a subsequent post, Cayo added: "A clarifying point: This was absolutely and undeniably an intimidation tactic. He leaned forward, raised his voice, tried to grab my arm with his free hand. For a hot sec I thought he was going to hit me. Don’t make excuses for his actions in my comments anymore pls & thank."

Biden abruptly announced his opposition to the Hyde Amendment, which bans federal funding for abortion, earlier this month. Biden had championed the measure for decades, but came under intense fire from the party's liberal wing, prompting a sudden reversal that critics slammed as an instance of overt political opportunism.

SEE IT: WOMAN PROVIDES FOX NEWS PHOTOS OF FUNDRAISER WHERE SHE SAYS BIDEN WENT IN FOR IMPROPER CONTACT

Former Obama adviser and CNN contributor David Axelrod condemned the flip-flop, and Biden's communications director struggled to explain the move in a testy and awkward interview on the network.

“I wasn’t able to even finish my 30-second elevator pitch — I never got past the first sentence,” Cayo told Vice in an interview. “Just the fact that he wagged his finger at me in such a condescending manner is very telling.”

In a lengthy narrative provided to Vice, Cayo acknowledged being at the Iowa event to "bird-dog" Biden, along with "about a dozen" other activists who had all met protesting Brett Kavanaugh's confirmation to the Supreme Court last year.

"Every weekend, a couple of us have been going to events to ask Democratic presidential candidates where they stand on Supreme Court and lower court reform," Cayo wrote. "We’re hoping that if they get asked about it enough, it will become an issue at the debates, and if a Democrat wins in 2020, we’ll get to see some real reform."

The activist had posted on Twitter, prior to speaking with Biden, that he was a "disappointing" frontrunner who gave a speech that focused only on Trump, not on important issues.

Cayo said that when asked about Biden's flip on the Hyde Amendment, he tried to deflect by talking about the Violence Against Women Act, a broad law affording various protections and rights to women who are victims of domestic violence. One of the law's provisions, which permitted women to sue attackers in federal court, was partially struck down in 2000, on the theory that such attacks are too tenuously related to interstate commerce to fall under the Constitution's Commerce Clause.

2020 DEMS UNLOAD ON BIDEN, AS HE ASSUMES CLEAR FRONTRUNNER STATUS

"We asked him to protect survivors," Cayo continued. "Then he leaned in very close to my face, and started wagging his finger at me. He said, 'Nobody has spoken about it, done more, or changed more than I have.' When he walked away I shouted after him, 'We deserve better.' We left after that because we didn’t want anything to escalate; we didn’t want to be in a shouting match."

Biden currently leads his fellow Democrats and President Trump in some new polls. His many Democratic rivals, in turn, have increasingly taken shots at him, including for failing to attend many events with other Democrats and for changing his positions.

The Biden team has also had to grapple with accusations from a slew of women that he improperly touched them or made them feel uncomfortable over the years.

Cayo, writing to Vice, drew a connection between those accusations and Tuesday's incident.

"I can now make the connection between the man I saw and the man accused of harassment by multiple women," Cayo said. "I saw a man capable of those things: A man who can’t take responsibility, who doesn’t respect women, and who gets in their personal space."