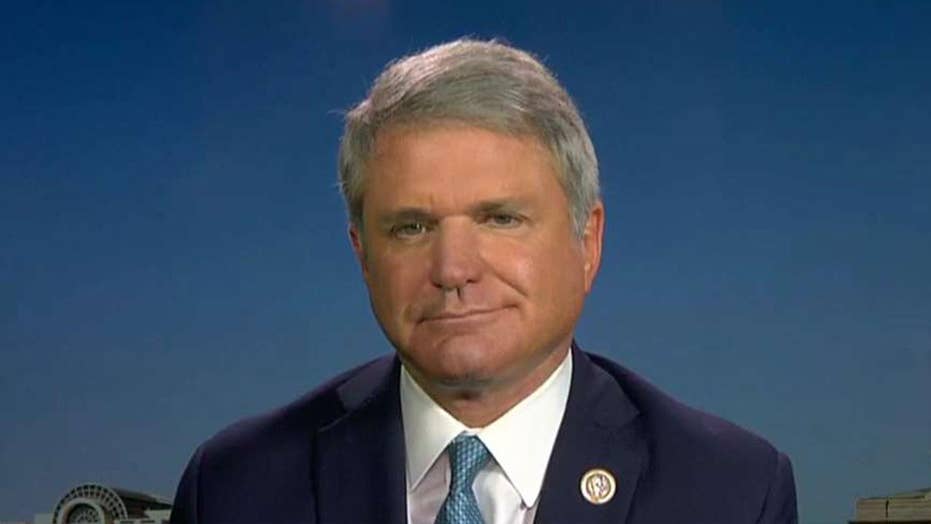 President Trump has some ‘splainin’ to do.

Specifically, explaining to House Republicans what he wants to do about immigration and border security.

House Republican leaders sidestepped an insurrection last week. The GOP brass forestalled a potential takeover of the House floor by a coalition of 20-plus Republicans and all 193 House Democrats. The special parliamentary gambit would have forced the House to debate a series of immigration bills later this month. But House Speaker Paul Ryan, R-Wis., and his team skirted the calamity by engineering a revamped border security and immigration package. It’s aimed at courting the support of moderate GOPers and many conservative Republicans.

On Thursday, the Republican leadership released details and text of the “Border Security and Immigration Reform Act.” The plan allots $25 billion to construct Trump’s border wall, ends the so-called “catch and release” program and allows the DACA population to apply for what’s termed as “six-year indefinitely renewable contingent non-immigrant status.” Republicans planned to pair a debate and vote on the new leadership measure with separate consideration of a more conservative plan authored by House Judiciary Committee Chairman Bob Goodlatte, R-Va., this Thursday. GOP leaders planned to measure support for the bill Friday morning.

But President Trump spoke about the immigration plan Friday on Fox. Everything then spilled off the rails.

“I’m looking at both of them. I certainly won’t sign the more moderate one. I need a bill that gives this country tremendous border security. I have to have that,” said the president. “We have to have the wall. If we don’t have the wall, there’s no bill.”

Trump’s remarks confounded everyone following the immigration debate. “Both of them?” That sounded like the Republican leadership compromise bill and the Goodlatte bill. “Won’t sign the more moderate one?” Well, the president seemed to refer to the new leadership bill. That measure wasn’t as “conservative” as the Goodlatte bill. After all, it was indeed more “moderate,” because, well, it was designed to court the votes of moderate Republicans.

Never mind that the leadership orchestrated the legislation alongside White House staff, aligning the plan with Trump’s demands on immigration.

The whole exercise reminded everyone of a late March fire drill where President Trump threatened to veto a $1.3 trillion omnibus spending package to fund the government. The president himself pushed for a major increase in defense spending in the legislation. His staff cut a deal alongside congressional Republicans and Democratic leaders. Then, just hours after Congress OK’d the pact, Trump threatened a veto before reluctantly signing the plan.

“I’m looking at both of them. I certainly won’t sign the more moderate one. I need a bill that gives this country tremendous border security. I have to have that.”

“I’m not sure the President is aware of everything that’s in the bill,” said Rep. Tom Cole, R-Okla., about the GOP leadership measure. “I think there was probably some confusion.”

“I think [President Trump] understands what’s in the bill and not in the bill,” said Meadows.

“We’re f---ed if that’s the case,” lamented a senior House Republican leadership aide, perplexed that Trump may have thrown his party under the bus.

The assistant GOP vote counter in the House, Rep. Patrick McHenry, R-N.C., told reporters that leaders were “seeking clarity” from the White House about the president’s comments. McHenry noted that GOP leaders would postpone a “whip” of the bill, where they try to assess the level of support for legislation. Such counts can signal a green light to the leadership to forge ahead with a bill. The whip count also can reveal potential problem spots, indicating a bill requires more massaging.

“House Republicans are not going to take on immigration without the support and endorsement of the president,” declared McHenry.

Trump to huddle with House Republicans to tackle immigration

Democrats certainly want to address DACA and other immigration issues. But it’s unlikely any Democrats would support either Republican bill. Some Democrats thought Trump may have hoodwinked Republican leaders with a political switcho-chango.

“You mean the president complicated the situation with a comment? I just don’t find this shocking,” said Rep. Pete Aguilar, D-Calif. “Where does this White House stand? They might walk it back. Clean up on aisle four. But that’s par for the course.”

Rep. Jeff Denham, R-Calif., is a moderate Republican who worked with Aguilar and others on the special strategy to force an immigration debate. But Denham also signed off on the new leadership plan and retreated in his effort to embarrass the leadership.

“We have negotiated the four pillars deal. His deal,” said Denham of Trump’s demands on immigration. “We’re waiting for the president to clarify his comments.”

Denham noted that his side would not “back down.” And if President Trump did hornswoggle the Republican leadership, there were two additional procedural tactics Denham and his supporters could still deploy to trigger an immigration debate.

“We are reserving all options parliamentarily,” warned Denham.

So would the House consider an immigration bill this week or not?

At the end of most weeks, House Majority Leader Kevin McCarthy, R-Calif., and House Minority Whip Steny Hoyer, D-Md., convene on the floor for what’s called the “colloquy.” They frequently banter about policy and politics. It’s often good theater. But the main reason they huddle is to discuss the House schedule.

Well, there was no colloquy on Friday. Hoyer found himself on the floor without a dance partner as McCarthy made a beeline out a side entrance of the House chamber bound for his office, Rep. Jason Smith, R-Mo., in tow.

“My suspicion is they don’t know what the schedule is for the week to come,” observed Hoyer.

On Friday evening, McCarthy published the anticipated floor schedule for the coming week. The slate mentioned opioid legislation, a terrorism measure and a Social Security bill. A final line suggested the complete itinerary was far from certain: “Possible Consideration of Legislation Related to Border Security and Immigration.”

Still, it’s unclear if either of those bills can pass. It’s believed the Goodlatte plan could score 200 GOP yeas on a really good day. But a more realistic vote tally is likely to hover in the 170 range. Moreover, the Republican leadership has no idea where they stand on the new legislation. That’s because House Majority Whip Steve Scalise, R-La., called off the whip following the president’s murky comments. Whipping the new bill just after Trump spoke would have been a fool’s errand. How many Republicans would be willing to stick out their neck for a bill which President Trump seemingly opposed?

That brings us to Tuesday night.

President Trump will head to Capitol Hill to meet with House Republicans.

It’s significant that House Republicans were unwilling to forge ahead with their immigration plan, regardless of Trump’s cryptic remarks. Of course, it’s sometimes a waste of time to try to advance legislation the president doesn’t support. House Speaker Paul Ryan, R-Wis., rejected the end-around parliamentary effort supported by Denham and Aguilar. The speaker repeatedly said the process would result in passage of a bill which may not become law.

Perhaps that’s the strategy lurking behind all of this. There’s no bill which will pass. Thus, nothing can become law. A lot of Republicans truly don’t want to tangle with immigration policy before the midterms, no matter what’s going on at the border. A vote against any immigration plan is a good vote in many conservative congressional districts. Remember that the public doesn’t follow every incremental move in Washington. Many people may think the president won’t sign anything because they left off with the president’s Friday comments and not the clarification which emerged later in the day from a spokesman.

Tuesday’s meeting is about the president pushing to construct his border wall and House Republicans waiting to move until they hear directly from Trump. Critics would argue against fealty to the president. Sen. Bob Corker, R-Tenn., ripped his colleagues a few days ago for their submissiveness to President Trump. Corker argued Trump wields a “cult-like” status among some Republicans.

It’s unclear if the House can, in fact, move any legislation on immigration this week. But if the president truly exerts the power over congressional Republicans which Corker suggests, Tuesday night’s session could be a lot more like “tellin’” rather than “‘splainin.’”