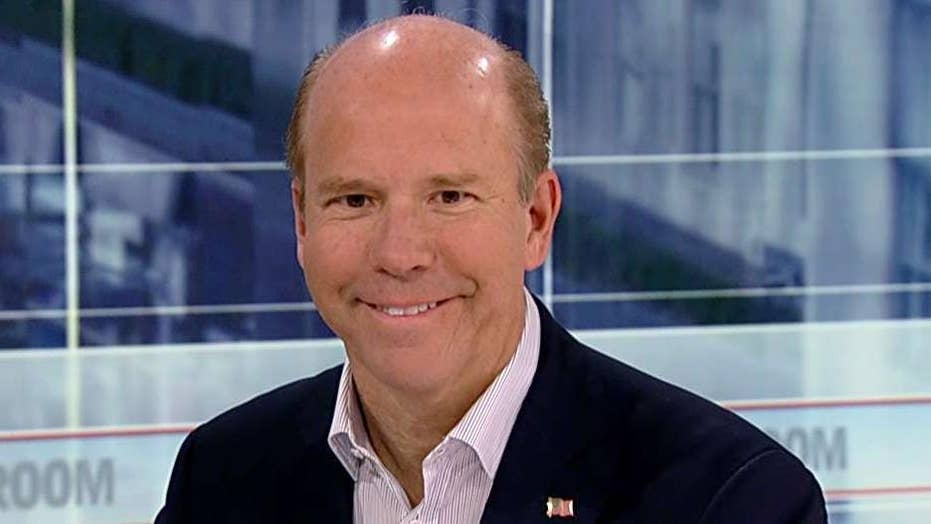 John Delaney: The American people will never have closure until they can read the Mueller report

2020 Democratic presidential hopeful John Delaney says that while the Mueller report was important, members of Congress need to get back to working on the issues.

CONCORD, N.H. – Former Rep. John Delaney worries that some of his rivals for the Democratic presidential nomination are moving too far to the left.

“You have to put forward ideas that make sense,” the Maryland Democrat told reporters Thursday as he sat down for an interview during a jam-packed two-day swing through the state that holds the first primary in the White House race.

Delaney charged that many of the other 2020 presidential candidates are “running on things that aren’t real solutions.”

Among the proposals he pointed to was the Green New Deal, the sweeping plan popular with the Democratic Party’s progressive base that aims to transform the country’s economy to fight climate change -- while enacting a host of new health care and welfare programs.

Instead, Delaney pushed his own plan to reduce carbon, which he said enjoyed bipartisan support when he introduced it during his tenure in Congress.

Delaney voiced concern that some of the proposals being pushed by his rivals will give President Trump and fellow Republicans ammunition and “could take us down a path where we’re not that competitive against the president” in next year’s general election.

“Democrats are going to realize that this election in 2020 should not be about kind of throwing the whole model of the country out of the window and starting from scratch. That feels like a very tough race to win,” he said.

The former congressman argued that Democrats won back the House of Representatives in the 2018 midterms because “they didn’t run as extreme candidates. And in many ways the United States of America is a giant purple district. The country is a competitive country. And so the lessons of 2018 should be obvious to us. If we want to flip a competitive district or a competitive country, we have to do it with a more moderate solutions orientated candidate.”

Delaney -- who touts his working-class upbringing, his success in the business world as the youngest CEO on the New York Stock Exchange, and his willingness to work with Republicans during his years on Capitol Hill -- paints himself as a moderate who can unify the country.

And the candidate, who announced his long-shot White House bid way back in the summer of 2017, said his game plan is “to stick to my message. Not get caught up in this rush to the left and socialism and all this stuff.”

“The Mueller Report has been a game change. I don’t think most Democrats really want to acknowledge that, but it has been. You combine that with a good economy and you’ve got a situation out there where unless you put forth what I call a ‘big tent’ Democrat, someone who could actually win the center, then we’re handing [Trump] a pretty good hand.”

Mueller’s nearly two-year-long investigation did not establish that members of Trump’s 2016 presidential campaign conspired or coordinated with the Russian government to interfere in the election in favor of Trump and at the expense of Democratic nominee Hillary Clinton.

Mueller’s long-awaited findings also did not take a clear position on whether Trump obstructed justice, with no conclusions that the president committed a crime but also not exonerating Trump.

Attorney General William Barr and Deputy Attorney General Rod Rosenstein on Sunday concluded, though, that Mueller’s report did not contain sufficient evidence to establish that Trump committed obstruction of justice.