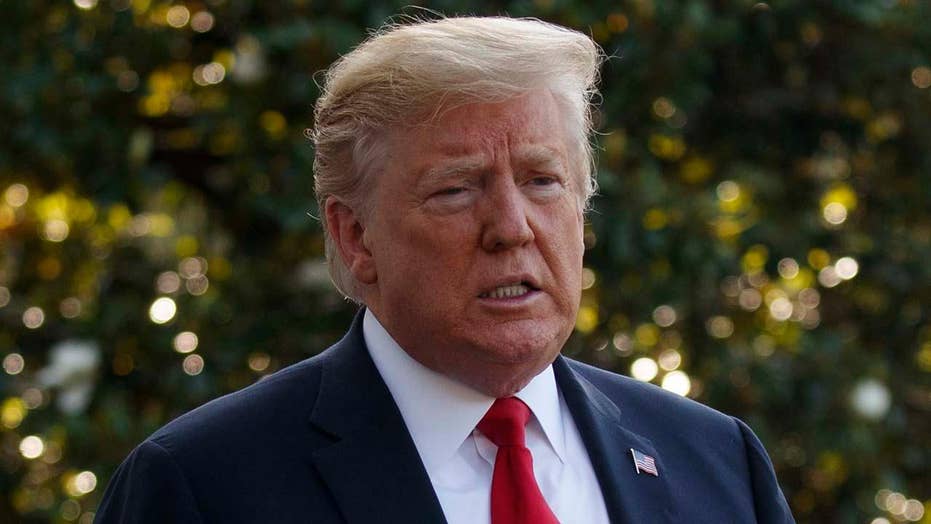 Based on congressional letters, FBI text messages and sources familiar with the matter, the Trump team was not specifically warned that retired General Michael Flynn and George Papadopoulos were already under FBI investigation in August 2016; chief intelligence correspondent Catherine Herridge reports.

A mid-August 2016 counterintelligence briefing for the Trump campaign did not specifically warn officials about Russian outreach to the Trump team, nor did it warn that two campaign aides, Mike Flynn and George Papadopoulos, were already under FBI investigation, Fox News has learned.

The new details about the so-called “defensive briefing” have emerged from congressional letters, text messages between FBI agent Peter Strzok and lawyer Lisa Page, and sources familiar with the matter. Such briefings are designed to warn the candidate and his team about national security threats.

“There was a defensive briefing of candidate Trump on Aug. 17 of 2016,” Texas Rep. John Ratcliffe, a member of the House Judiciary Committee, said Thursday on Fox News’ “America’s Newsroom.” “And I can tell you what he wasn't told: He wasn't warned about a Russia investigation that Peter Strzok had opened 18 days earlier.”

A source familiar with sensitive records documenting the August briefing told Fox News that Strzok was in a unique -- and apparently conflicted -- position. Strzok opened the FBI investigation into Russian outreach to Trump campaign aides, while at the same time he was supposed to be warning the Trump campaign about Russian activities.

Critics of the Russia and special counsel probes question whether the lengthy investigation could have been shorter, or whether it could have been avoided altogether, had Strzok and others provided adequate warning.

In the days leading up to the August 2016 defensive briefing, text messages indicate Strzok set up times to rehearse. In an Aug. 13 text to Page, Strzok said, “Im going to have (redacted) do his CI (counterintelligence) brief presentation for me and Jon and (redacted) on Mon afternoon.”

Sources tell Fox News the first redaction is believed to be FBI agent Joe Pientka, who interviewed then-National Security Adviser Mike Flynn along with Strzok in January 2017 and who is also believed to be the handler for Justice Department official Bruce Ohr.  After the FBI fired dossier author Christopher Steele for contact with reporters in the fall of 2017, Steele was able to maintain contact with the bureau through Ohr.

"Jon" is believed to be in reference to Jon Moffa, a senior FBI analyst.

Strzok also texted of another planned rehearsal: “I want to do another one Tues AM for at least Bill,” he said in reference to boss Bill Priestap. “You think add you, [FBI lawyer] Jim Baker? I want both (f)rank and thoughtfulness for feedback. Plus repetitions for him.”

Those texts about rehearsing the briefing were two days before Strzok’s now-infamous “insurance policy” text to Page.

“I want to believe the path you threw out for consideration in Andy’s office – that there’s no way he gets elected – but I’m afraid we can’t take that risk,” he texted at the time. “It’s like an insurance policy in the unlikely event you die before you’re 40.”

And days earlier, Page stated, “[Trump’s] not ever going to become president, right? Right?!” Strzok responded, “No. No he’s not.  We’ll stop it.”

“Why would Peter Strzok, who would participate at [former FBI director] Jim Comey's direction in a defensive briefing designed to protect and warn a candidate, be the same person who is in fact at that time already investigating the candidate's campaign? That shouldn't happen. There should be answers to those questions,” he said.

Strzok’s lawyer has yet to respond to requests for comment. If a response becomes available the reporting will update.