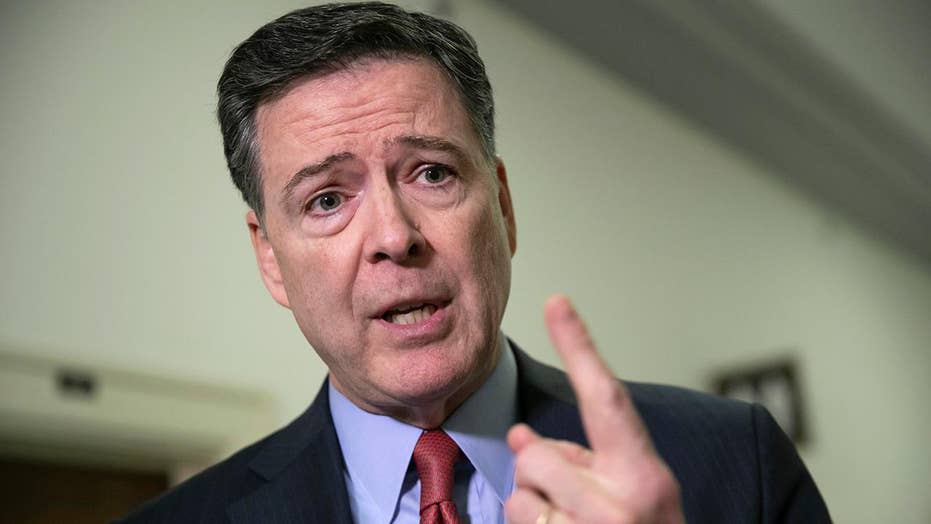 At least 14 FBI employees were referred to the agency's internal ethics office for unauthorized disclosures of classified or sensitive information in the last three years, according to FBI Office of Professional Responsibility (OPR) documents obtained by the conservative transparency group Judicial Watch.

The documents, released Tuesday, offered a window into what the Department of Justice Inspector General (IG) has characterized as a culture of leaking at the FBI, which allegedly permeated the bureau's highest levels, and how the agency polices itself. In several instances, the documents show that OPR's proposed punishments for FBI employees were reduced dramatically.

IG and DOJ reviews of the FBI's handling of the counterintelligence probe into President Trump's team, and related matters, are ongoing.

"We have profound concerns about the volume and extent of unauthorized media contacts by FBI personnel that we have uncovered during our review,” the IG wrote in a bombshell report last year, noting that some of the FBI's improper press communications came from phones at the agency's Washington, D.C. headquarters.

The IG added: “FBI employees received tickets to sporting events from journalists, went on golfing outings with media representatives, were treated to drinks and meals after work by reporters, and were the guests of journalists at nonpublic social events."

Punishments for the alleged violations outlined in the new OPR files ranged from letters of censure and week-long suspensions without pay, to several summary dismissals.

According to the documents, in June 2017, OPR found that a senior FBI employee “misused an FBI database, and provided sensitive information to a former FBI employee." That employee thought he “had the support of his Division to use his discretion," and ultimately received a letter of censure from the bureau's top brass, instead of OPR's recommended 15-day suspension.

In October 2017, an unidentified FBI employee was recommended for termination by OPR, but received a 45-day unpaid suspension instead.

In January 2019, another employee received a 60-day unpaid suspension, instead of the termination recommended by OPR.

One employee was accused of “Investigative deficiency – improper handling of documents or property in the care, custody or control of the government; unauthorized disclosure – classified/law enforcement sensitive/grand jury information” and “failure to report – administrative.” He received only a 10-calendar day suspension wtihout pay in February 2018, instead of a proposed 30-calendar day suspension.

One file closed on March 20, 2018 which apparently refers to former FBI Director Andrew McCabe, states in mitigation the employee had a "remarkable performance record" and was "facing unprecedented challenges and pressures" when he "released the FBI Sensitive information to a reporter and lacked candor not under oath and under oath when questioned about it."

Nevertheless, a factor in "aggravation" was that the employee "held an extremely high position and was expected to comport himself with the utmost integrity" and that "lack of candor is incompatible with the FBI’s Core Values."

McCabe's violations stemmed from his response to an October 2016 Wall Street Journal report about sizeable campaign donations from Democrats to McCabe's wife, Jill, during her campaign for the Virginia State Senate. An IG investigation found that McCabe instructed FBI lawyer Lisa Page and FBI public affairs chief Michael Kortan to work with the Journal's reporter to set the record straight.

McCabe later sued the DOJ to obtain documents related to this termination, while another former high-ranking anti-Trump FBI official, Peter Strzok, announced Tuesday he was outright suing the bureau over his termination.

An investigative source told Fox News that Page’s statements to investigators were “critical” because they directly contradicted her boss, McCabe. According to the source, McCabe's lack of candor about the contact with the Journal reporter led to his firing. The source added that Page's testimony about the matter contradicted McCabe's. Then-FBI Director James Comey claimed he never authorized the leak to the Journal.

Comey himself has faced scrutiny in recent days. Last week, bureau documents also obtained by Judicial Watch revealed that FBI agents went to Comey's house and retrieved as "evidence" a secret, previously unreported memo he wrote, well after he was fired as FBI Director.

The day after agents visited his home, Comey admitted in congressional testimony that he had leaked memos purportedly documenting his contemporaneous recollections of his conversations with President Trump, through a friend, so that Special Counsel Robert Mueller would be appointed. Comey wrote, for instance, that Trump allegedly demanded his loyalty, and said he hoped the FBI would let the Michael Flynn matter "go."

However, the DOJ decided last week against prosecuting Comey for classified information following a criminal referral from the IG, sources familiar with the deliberations told Fox News.

“Everyone at the DOJ involved in the decision said it wasn’t a close call,” one official said. “They all thought this could not be prosecuted.”

In April, a court-ordered filing by the DOJ revealed Comey included a slew of sensitive and classified information in a series of comprehensive personal memos -- including not only the details of his conversations with Trump, but also the "code name and true identity" of a confidential source.

The filing acknowledged that Comey maintained a far more detailed and lengthy private paper trail than was previously known, and that federal investigators apparently hoped to use Comey's contemporaneous, secretive writings to test the truthfulness of Trump's comments as part of a then-ongoing obstruction-of-justice inquiry.

Comey meticulously outlined "foreign intelligence information obtained from and through" the key human source, "information about whether the FBI initiated coverage through the Foreign Intelligence Surveillance Act (FISA) on a particular individual," relevant "sources and methods" used in the FBI's investigation and "information concerning the President's foreign policy decisionmaking," according to the DOJ.