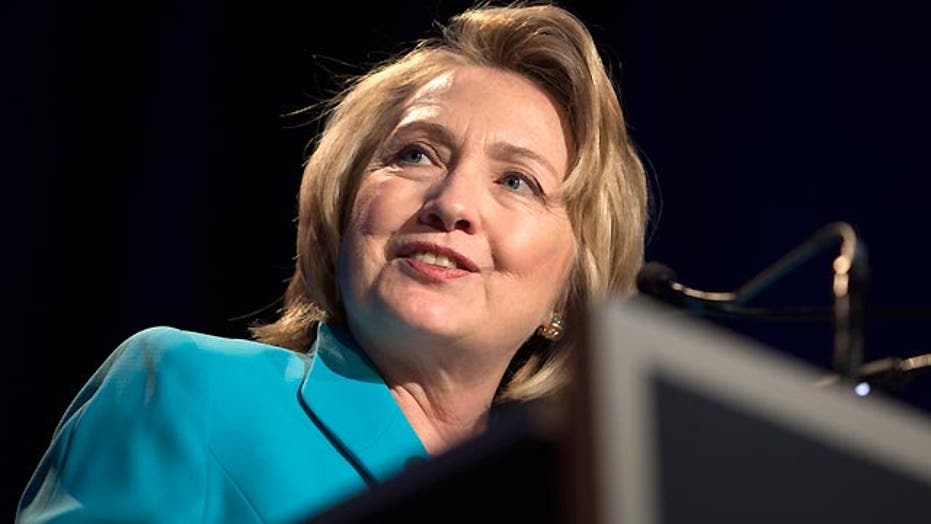 Looking ahead at potential for Hillary Clinton in 2016

Have the Clintons decided that the Obama brand is kaput? That could be why former President Bill Clinton recently criticized President Obama’s timid engagement with Syria. With Obama’s approval ratings dropping, and Hillary gearing up to run for president, it’s possible the Clintons have decided to put a little distance between the former first lady and the current first man.

It’s a smart move, on many fronts. Americans are tiring of our professorial president. In particular, a recent CNN/Research poll showed only 37% of independents now approve of the job Mr. Obama is doing -- a swift 10-point drop.

Perhaps most significant is that for the first time the public is souring on the president’s character -- with less than half now judging him trustworthy and honest. The Clintons are not stupid -- after sucking much sustenance from the Secretary of State gig (remember the embarrassing farewell interview with Steve Kroft), they may have decided to break for the hills.

There’s another reason Hillary might choose to remove herself from the Obama aura. She will soon have to run on her record.

Our lack of progress in dealings with Iran, North Korea or Middle East foes Israel and Palestine, our chilly relations with Russia and China and the unfolding tragedy in Syria begs the question – what exactly did our Secretary of State accomplish?

Racking up miles traveled does not position someone to occupy the White House – or Delta would be a better training ground than the Senate.

No, Hillary will have to run on her long and impressive CV. It would be better for her to deposit today’s foreign policy fiascos on Obama’s door, and husband Bill nicely took the necessary first step.

Mrs. Clinton has other issues, of course – Benghazi and hints of cover-ups of big-wig misdeeds at State come to mind. But despite the lame run at State and a drop in her-once towering approval ratings, enthusiasm on the left runs high, even intemperate.

Why does everyone consider Hillary such a rock-solid sure bet? (Such a sure bet that the highly ambitious New York Governor Andrew Cuomo supposedly will not contest her right to the throne.)

Mainly because she’s not Obama. Democrats disappointed in President Obama tend to love Mrs. Clinton. If only we had elected Hillary they say, sotto voce – we wouldn’t be creeping slow-motion through this recovery, we wouldn’t have gridlock in Congress, we would have leadership.

But, these people tend to confuse Hillary with husband Bill. President Clinton is a liberal, but he pivoted when he had to, is a pragmatist, and worked successfully across the aisle.

He collaborated with his opponents to give us a robust economy and a balanced budget. Bill Clinton is a masterful politician, and there’s no doubt that Hillary learned from his example.

But Hillary Clinton, who describes herself as a “modern progressive,” is as much the ideologue as Mr. Obama. Remember that she sacrificed her first-lady influence on the altar of universal healthcare.

This is the Wellesley student who wrote her senior thesis on Saul Alinsky, (a thesis that was sealed while she was in the White House, overturning long-standing Wellesley tradition) and who nearly went to work for the godfather of community activism after graduation.

Mike Kelly, writing in The New York Times Magazine in 1993, describes Clinton this way: “By the time she graduated from Wellesley to head on to Yale Law School, Hillary Rodham had become a radical, in the true sense of the word: dedicated to the imperative of profound societal change, and confident in her own ability to direct that change.”

That urge to change America is not the only ambition she shares with Mr. Obama. Like the president, Hillary has long wanted to use taxes to narrow the divide between rich and poor.

She shares with Mr. Obama a disdain for the private sector, and for market solutions.

This is the woman who, in 1990, lobbied Congress in favor of a centralized system of child care even as the National Governor's Association, chaired by husband Bill, pushed for a more market-oriented system.

Campaigning on solutions to the mortgage fiasco, she summoned her inner Elizabeth Warren, focusing on “cracking down on unscrupulous brokers who lure unsuspecting families into unfair mortgages” and “prohibiting all prepayment penalties on all mortgages.”

Unimaginably, in the teeth of the meltdown, she proposed that we “expand the role also played by Fannie Mae and Freddie Mac..” Expand the role?

Like Obama, Clinton is a champion of organized labor, once suggesting “I believe we can help more workers join unions to improve wages and conditions in our workplaces for jobs that cannot be shipped overseas.”

It never occurred to her that maybe unions had contributed to the outflow of jobs from the U.S. by driving up wages; like Obama, Clinton blames greedy corporations.

Along with President Obama, Clinton thinks something is quite wrong in the United States. Several years ago she made a widely ridiculed speech in which she described America as suffering from a "sleeping sickness of the soul." She observed a "sense that somehow economic growth and prosperity, political democracy and freedom are not enough.”

In her commencement address to her Wellesley graduating class of 1969, Clinton said the "prevailing, acquisitive and competitive corporate life is not the way of life for us…."

This sounds like Obama addressing Arizona State graduates, scorning those who might “chase after the usual brass rings: being on this "who's who" list or that top 100 list; how much money you make and how big your corner office is…”

And who does this Clinton quote remind you of? “Now, we have seen for more than a century that fairness doesn't just happen. It requires the right government policies.”

Hillary Clinton needs to distance herself from Obama, but not for the obvious reason that he is in trouble.

If they do their homework, voters may discover that Mrs. Clinton walks in Obama’s philosophical footsteps. Americans think voting for Hillary will bring back Bill’s 1990s, but electing her could instead prolong the Obama agony.