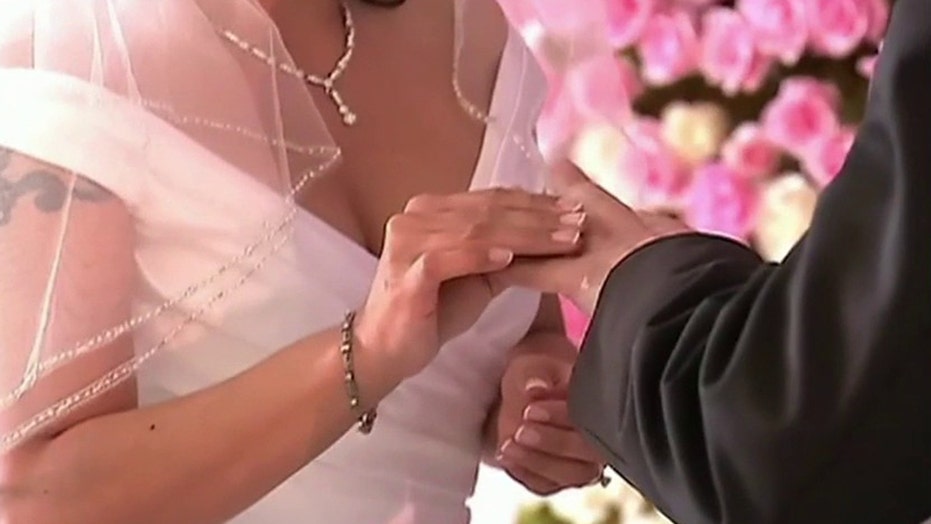 My wife and I had only been dating for six weeks when we said "I love you" for the first time.

It happened on an emotionally charged night when we both shared some hard things from our pasts. When we both responded with unconditional grace; the momentum carried us away, and the next thing we knew, we were both putting our hearts on the line.

Our feelings took on even more momentum and only four months after we met, I surprised Raquel on the River Terrace of the Kennedy Center and asked her to marry me. She said yes and we celebrated with family members that night. It couldn’t have been more idyllic -- until the next morning.

JOSHUA ROGERS: I KISSED MY WIFE, MY DAUGHTER SAW ME AND SAID ONE WORD I WON'T EVER FORGET

Almost instantly, we went from extending unconditional grace to wrestling for control over the wedding budget. For example, I insisted that we string up Christmas lights in someone’s back yard and cater the event with Subway sandwich trays. Raquel did not appreciate this particularly absurd request (and many others), but at the same time, she often provoked fights with her tendency to be unnecessarily hypercritical.

Things quieted down in the two weeks before the wedding -- I guess we were too exhausted from wedding planning to keep bickering. But we didn’t even make it past the honeymoon before we started going at it again.

In the 12 years since then, we haven’t arrived when it comes to conflict resolution, but we’ve come a long way. Our conflicts have gradually become more constructive and less petty; and in a few cases, conflict has ceased.

As I think about the incremental improvements we’ve made, I’ve been contemplating our growth. What are we getting right, and how can we do more of that? What has changed? There are three things that come to mind:

We’re more willing to genuinely apologize. In the words of Elton John, "sorry seems to be the hardest word." It's the hardest word because it's an admission that I'm wrong. My pride can’t handle that. When I give in, however, there's a freedom I discover. I don't have to carry the weight of my precious image. I can, with an apology, actually eliminate the momentum of a fight because an apology often resolves the heart of a conflict.

I've begun to accept the fact that Raquel's actually right a lot of the time. When we first got married, every one of Raquel’s contradictory stances called for my opposition. In my view, my perspective was the clearest and rightest one. Yet, as I started reflecting on the times when I had written off her opinion during decision making, I saw that things often didn’t go well. I've since done a better job of honoring both of our perspectives. As a result, Raquel feels more respected, we make better decisions and both of us win.

As we work through conflict, we’re learning what always works (humility) and what never works (pridefulness).

We’re picking our battles more carefully. Earlier in our relationship, I was willing to go to the mat about anything -- chores, church, restaurant choices -- you name it. So much of it wasn't worth it, and even if it was worth it (like working through wedding budgeting) we went about it the wrong way. Being willing to give up the fight -- or at least the way we fight -- reduces stress, brings peace, makes our relationship more loving, and with all of that, naturally strengthens our marriage.

When I think about it, actually, our fights haven’t been totally useless. As we work through conflict, we’re learning what always works (humility) and what never works (pridefulness). For example, last night, Raquel and I sat down to talk through our budget -- something I was dreading. Our financial discussions have often been as bad during our marriage as they were during our engagement.

But something happened: There was grace. We agreed on many things, and where there was disagreement, we were able to move on without necessarily getting everything resolved. (Speaking of being gracious, Raquel even cut me some slack when I almost fell asleep in the middle of our conversation!)

There’s hope for you and for us. With a little humility, we can continue to make progress -- even if it happens one fight at a time.